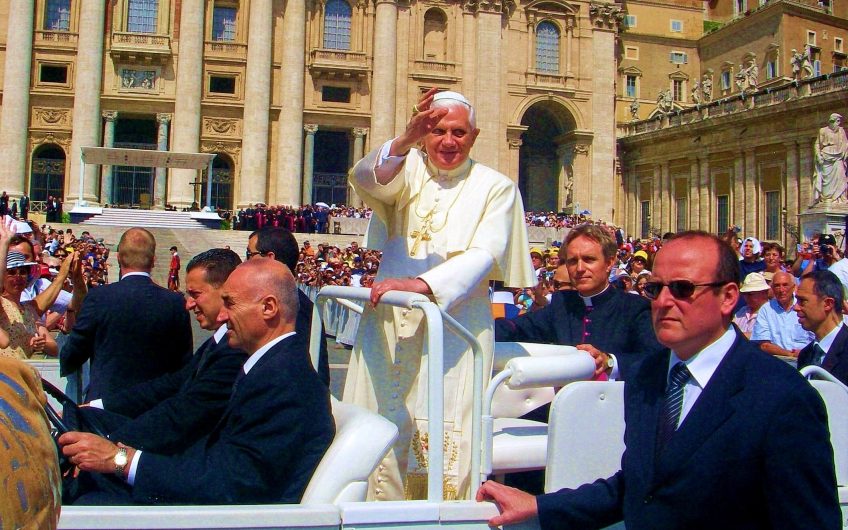 My father is a Catholic priest.

When he was made a priest, a few years after he gave up being an Anglican clergyman, it felt to the rest of his family like a resumption of business as usual. Rather symbolically, the house we moved to on his becoming a priest had been the vicarage of the local Anglican church.

He became a Catholic priest under the Apostolic Constitution, which allows the ordination of married former Anglican clergy. I don’t think he ever found a wife and children an encumbrance; nor did any of the people in his parish, or his celibate colleagues. Quite the contrary.

All this makes the great ding-dong that has broken out in Rome over clerical celibacy hard to understand. Far from being the pizza-eating, football-watching buddies portrayed in the film, The Two Popes, Pope Francis and Pope Emeritus Benedict are being sucked into a head-to-head struggle over Francis’s reforming agenda. The row is worthier of Jude Law and John Malkovich as the Young Pope and the New Pope in Paolo Sorrentino’s eponymous series of Vatican intrigue.

Traditionalists are up in arms about the Amazon synod, where bishops voted to allow married priests, to meet the dire shortage of priests in Latin America. And now a Guinean Cardinal, Robert Sarah, has written a book, From the Depths of Our Hearts, claiming that clerical celibacy is an essential feature of the priesthood and that there’s ‘an impossibility of a marital bond’ for priests. Pope Benedict is, or was, the co-author, but he has now removed his name from it and accusations are flying that he has been manipulated.

Clerical celibacy is a question of discipline, not doctrine. It was only made mandatory in around the 11th century and, although the Catholic church does not accept the validity of Anglican priestly orders, it does accept Orthodox priests as priests and they can be married. Conservatives think clerical marriage is the thin end of the liberal wedge, but it needn’t be.

My father joined the Catholic church to enjoy its doctrinal orthodoxy, not subvert it. As far as I know, no one ever complained about his being married once he was a Catholic priest. There were no red-faced reactionaries refusing to receive the sacraments from his uncelibate hands. His churches were always pretty full, his parishioners were pleased to see him and my mother was welcomed everywhere.

Plenty of parishioners saw it as a positive advantage. Apart from the extra pair of hands clergy wives provide at the social and organisational end of church life, some people find a married priest more approachable. It can be good for the priest, too. The priesthood can be a lonely profession. Having a wife and family into whose bosom you can retreat after a hard day at the clerical coalface is a blessing – much better than a whisky bottle.

As an Anglican, after a couple of curacies, my father spent some years as a university chaplain. After that, he was a parish priest in Oxford; first in Headington, then at St Mary Magdalen, an Anglo-Catholic church in the city centre. He also served as a rural dean.

The ordination of women priests and the general drift of the Anglican church made him leave, but his Catholic incarnation is hard to distinguish from his Anglican one, at least to all outward appearances.

He has now been a Catholic priest for almost exactly the same period of time as he was an Anglican priest. He has spent that time working as a curate at a parish, a university chaplain and a parish priest in central Oxford. While running his Catholic parishes in south Oxford, he took on a broader role as a kind of rural dean. It’s basically been the same gig.

The only time I came across anyone who was shocked that my father was married was when a woman telephoned our Anglican vicarage a few years before he went over to Rome. I told her my father was not in. She was appalled because she had been taking her elderly and devout Catholic mother to his (very high Anglican) church for the past few weeks, assuming it was Roman Catholic.

The Catholic Church should allow some married men to be non-stipendiary priests, who could earn a living doing a day job. This would help it to address the biggest problem it faces, which is not priests having wives, but the faithful not having access to the sacraments because of the shortage of priests.

Bring out the Branston! - Sara Wheeler