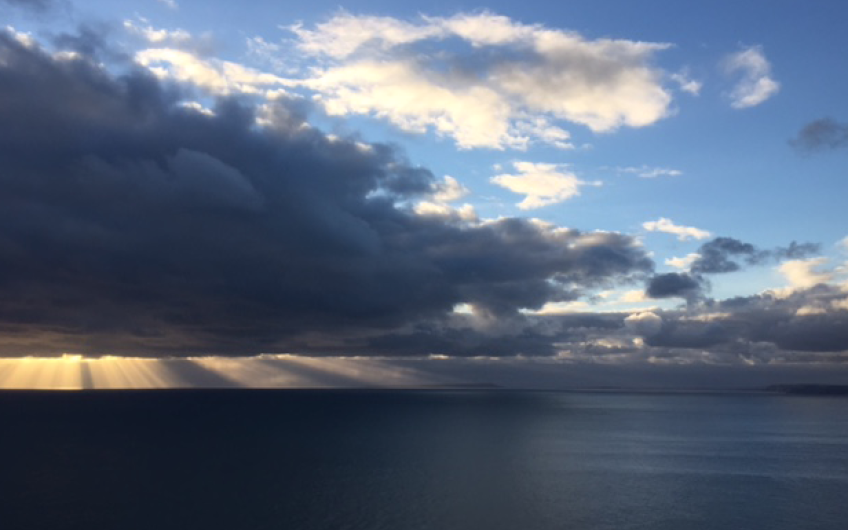 ‘You never send us a postcard’, is my eighty-year old father’s immediate response to hearing I’ve been on holiday. He forgoes the cliche ‘did you have a nice time?’ The second question is always about the weather. He simply cannot comprehend that one can have a cloudy day or two, and still come up smiling. ‘Poor you! How awful!’ T’was ever thus.

His mother had subscribed to the bohemian belief of the thirties that sunshine and fresh air were even more vital to one’s health than green vegetables. His childhood had been spent on the beaches of Hastings, Bexhill and, then, Swanage during the war. Throughout the Dorset summers of our childhood, he hunted the sun through the British clouds with the manic desperation of one seeking gold at the end of the rainbow. His mood was completely affected by sunshine. He became very anxious and animated on a cloudy day, even climbing hills to see if it was sunny in a different part of Dorset.

Our holiday destinations were often chosen forty-eight hours before departure. My parents would burst into the travel agency, my father clutching the Daily Telegraph. He would turn it over to the vital back page and read out the temperatures. ‘“Faro sixty-eight, fair” – risky,’ he would say, leaning on the counter behind which an intimidated schoolleaver cowered under a library of brochures. ‘“Madeira ninety-two, sunny.” Super.’ ‘Too hot,’ my mother would retort. ‘“Athens eighty-six, sunny?”’ he would continue. Once they had settled on the optimum temperature, my mother was left to salvage the holiday by finding the most suitable town close to the Telegraph’s destinations and a reasonable hotel. My father had no interest in this stage of the proceedings. Sun was all that mattered.

This system was far from infallible. We spent two weeks at the Rock Hotel in Gibraltar because my father had seen ‘Tangiers eighty-eight, sunny’. He wasn’t aware of the Levante, the thick cloud which hugs the tiny peninsula like its rock apes, and blocks out the sun’s rays. He finally could take it no longer and we checked out of the hotel, and took the ferry to Tangiers, a city ill-disposed to British family holidaymakers, for an extra unplanned week so he could top up his tan.

Even now, he rarely wears a shirt walking through his home town of Swanage from April to October, and it’s never buttoned up just in case the sun peeps above the clouds and its impact on his skin is slowed down by frantic unbuttoning. His skin is mahogany, indelibly dyed by Hawaiian Tropic. An inconsistent occupant of the bath tub, his unseen presence can always be detected by his coconut aroma. Yet his eyes are permanently squinting up at the sky, imploring the clouds to give him ten more minutes on his left profile.

And I am forever in his debt because I never mind if it’s cloudy on holiday. I am spared the life of a cloud-botherer.