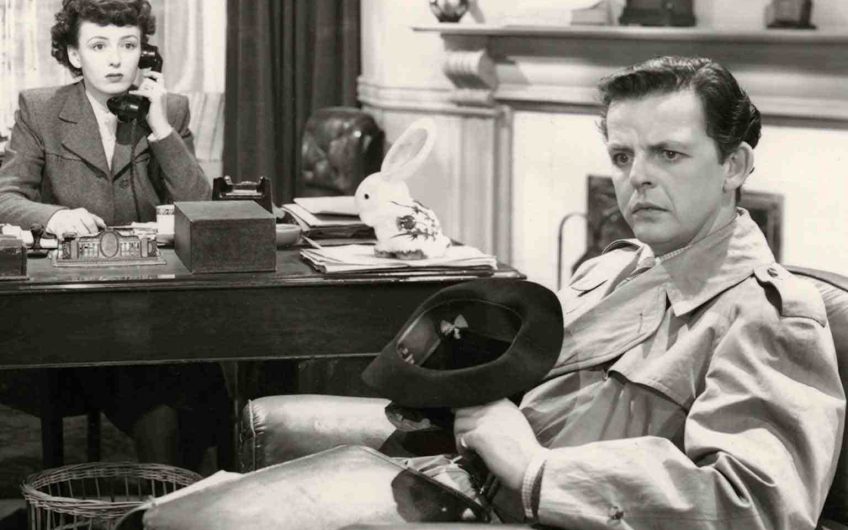 Tomlinson, as an undercover journalist, with Carol Marsh in Marry Me! (1949)
View Full Size
1
of 1

Aged seven, I bought my first LP. It was the Mary Poppins soundtrack. Though I played it a thousand times, I never took to the treacly, goody-two-shoes Feed the Birds. When it came on, I would pick up the stylus and skip straight on to my favourite track, Let’s Go Fly a Kite.

It was sung by Mr Banks, who begins the film huffing and puffing as a starchy pillar of respectability and ends it having opted for a life of mischief and merriment.

Thirty years later, I was the restaurant critic for the Sunday Times. One afternoon, my answerphone was flashing, so I pressed the button to hear the message. Out boomed the voice of Mr Banks, complaining, in the strongest possible terms, about the food and service at a fashionable restaurant in Covent Garden. The restaurant was called Orso, but Mr Banks mischievously changed its name to Arsehole.

He ended his message by suggesting we have lunch. How could I possibly refuse?

Like his alter ego, David Tomlinson was a man who got the better of convention.

When he was 18, he was informed by his solicitor father that he had found him a job with an oil company, just as he had found his elder brothers jobs in the City:

‘The idea of putting on a stiff collar and tie every day and catching the early train to London to work in an office appalled me.

‘I plucked up courage. I had already made up my mind and that bolstered me. I had plans of my own. “I’d like to be an actor,” I said.

Despite his father’s harsh judgement, David managed to conquer a stammer and soon became known for what he liked to call ‘my dim-witted, upper-class-twit performances’. Happily, there is currently a revival of interest in his life and career: a couple of years ago, Miles Jupp took a play about him, The Life I Lead, to the West End, and now Nathan Morley has written a terrific new biography.

I suspect David’s portrayal of Mr Banks owed something to his bossy father, who lived an outwardly respectable life while secretly juggling two entirely separate families. For decades, he would spend the weekends with his wife and sons in Folkestone. During the week, he would tell them he was staying at his London Club, while in fact he was living with his mistress and their seven illegitimate children.

David’s brother first realised something was awry when his double-decker bus stopped unexpectedly in Chiswick, and he found himself gazing through a first-floor window at his father sitting up in bed in a strange house drinking a cup of tea.

Years later, when their 86-year-old mother was on her deathbed, she silently passed a letter to David and Audrey. At that moment, her husband – David’s father – entered the room.

‘I’ve just been showing David that letter,’ she said.

‘What letter?’ he asked.

She then handed him a letter he had written to his mistress from the trenches in the First World War: he must have accidentally placed the letter to his mistress in the envelope addressed to his wife, and vice versa. So for 60 years she had known of her husband’s double life, but had never mentioned it.

‘The marriage was important to her,’ David wrote in his autobiography. ‘So, I suppose, was this supreme act of one-upmanship on her deathbed.’

There must surely have been an element of his father in the characters David so often played: respectability in jeopardy, pomposity out of its depth.

In real life, as his good friend Griff Rhys Jones has pointed out, David was ‘an anarchist in patrician clothing’. Unlike his father, and the characters he played, he found it impossible to dissemble. His best friend, Robert Morley, once said that you knew where you stood with David because he always said exactly what he thought.

His son Jamie agrees: ‘He was unable to hide what he thought if he did not like something or did not rate somebody. He could be charming. On his best behaviour he was wonderful. He was terribly funny if he wanted to be… He could behave appallingly. Normal people wanting to say something have that wonderful safety mechanism. They think, “I don’t think I should say that.” ’

David had no such safety valve. He enjoyed cocking a snook. He once accosted the secretary of his club, Boodle’s, on the stairs. ‘I do admire the way you are always so pleased with yourself,’ he said. ‘How do you manage it? Do you go to evening classes?’

David approached Griff Rhys Jones in Burlington Arcade to laugh at his coat. This led to a firm friendship. ‘Thereafter I bobbed in his not inconsiderable wake around London,’ says Griff, who recalls his disarming candour. ‘After a performance in Farnham, he greeted the distinguished actor and playwright who had particularly invited us to see the play with a sympathetic “So brave.” ’

David admired performers like Max Miller, Peter Cook and Peter Sellers, who seemed to dance on the borders of mayhem.

Early in his acting career, he watched from the sidelines as Laurence Olivier played Coriolanus at the Old Vic. As the curtain fell, he saw Olivier raising two fingers to the audience and blowing what David described as ‘a raucous raspberry’.

Ten years later, when they were appearing in a film together, he asked Olivier why he’d behaved like that.

‘You must always have a modicum of contempt for the audience – not too much – just a little, and don’t ever forget that none of them can do it as well as you,’ Olivier replied.

Robert Morley behaved with similar diablerie. If he was tired after a day at the races, he would happily come on stage, sit down on a chair and remain seated for the rest of the show.

The two friends were once directed by the intense 25-year-old Peter Brook, who might be said to have pioneered the modern idea of the director as God.

‘Not in our view an attractive man – and, good heavens, wasn’t he young,’ wrote David in his autobiography.

Morley claimed that Brook kindly took their coats when they arrived for rehearsals and helped put them back on at the end of the day. ‘We had to give him something to do, after all.’

Needless to say, Brook came to loathe Morley’s notably unsolemn performance – winking, casting funny looks at the audience, popping in and out of character and ad-libbing to his heart’s content.

David relished stories involving inappropriate behaviour. His regular luncheon partner Beryl Bainbridge described him as ‘a man cast in the same mould as Dr Johnson, one who observed the absurdities of life yet still loved his fellow man’.

David once told me of a time he was having dinner with Mr and Mrs Walt Disney. When Walt left the table for a minute, Mrs Walt took advantage of his absence to hiss, ‘I don’t know why Walt wanted to make Snow White. He’s always hated dwarfs!’

It was this sense of mischief that attracted him in his old age to the worlds of Private Eye and The Oldie. He became friends with Richard Ingrams, with whom he once shared his worries about Auberon Waugh.

‘I’m concerned about Auberon Waugh and Princess Di,’ he wrote to him, at a time when Princess Diana was busy courting prominent journalists. ‘Robert Morley always said she was utterly brainless and I believe she flirts with the boys but doesn’t let them get their leg over. If you have difficulty with this low slang, I can translate. Now that’s no good for anyone. Poor Will Carling. We might save AW. Do you agree?’

Reading this letter in the new biography, I recalled Alexander Chancellor chuckling after Auberon Waugh had told him he might take a condom along to his meeting with Princess Di, ‘on the off-chance’.

David’s cheeriness was hard-won, the product of resilience.

He had married in New York in September 1943, when he was 25, after a whirlwind romance with a beautiful American widow. ‘I was the luckiest fellow in the world,’ he recalled.

But within weeks he had been called back to Britain to continue his work with the RAF, forced to leave his wife behind, while her visa was sorted out. At the beginning of that December, she checked into a room on the 15th floor of a hotel on West 57th and threw herself out of the window, together with her two little boys. It later emerged that she had a long history of depression.

David later married Audrey Freeman, an actress and dancer. ‘I was truly smitten,’ says Audrey. ‘He had immense sex appeal. He didn’t know it and laughed when women were suggestive. I thought it terribly funny.’

Theirs was a long and happy marriage. Their eldest son – now a judge – found out about David’s first marriage only after he had stumbled on the marriage certificate. David never mentioned it directly: ‘I remember my dad saying to me there will be times in life when something will happen and you cannot imagine that you’ll ever recover. He said that humans have this incredible ability to take shock and trauma, and it’s almost like they analyse it and dissect it and bit by bit you come through it. And I think he was trying to tell me, “Believe me, I know about trauma.” ’

David thought that he resembled a disappointed spaniel. Noël Coward said he looked more like ‘a very old baby’.

He never lost his theatrical sense of fun. When my children were small, and addicted to watching Mary Poppins on video, we went out to lunch with David and Audrey at the Lighthouse restaurant in Aldeburgh.

Over pudding, he began singing, ‘Let’s go fly a kite…’ while everyone in the restaurant looked on, entranced.

He died aged 83, in 2000. He had told his family he wanted the words ‘David Tomlinson, an actor of genius, irresistible to women’, engraved on his headstone.

So. Farewell then, David Tomlinson,

Up to the highest height.

Yes, that was your catchphrase –

And where you are going now.

Nathan Morley is the author of Disney’s British Gentleman: The Life and Career of David Tomlinson (The History Press)