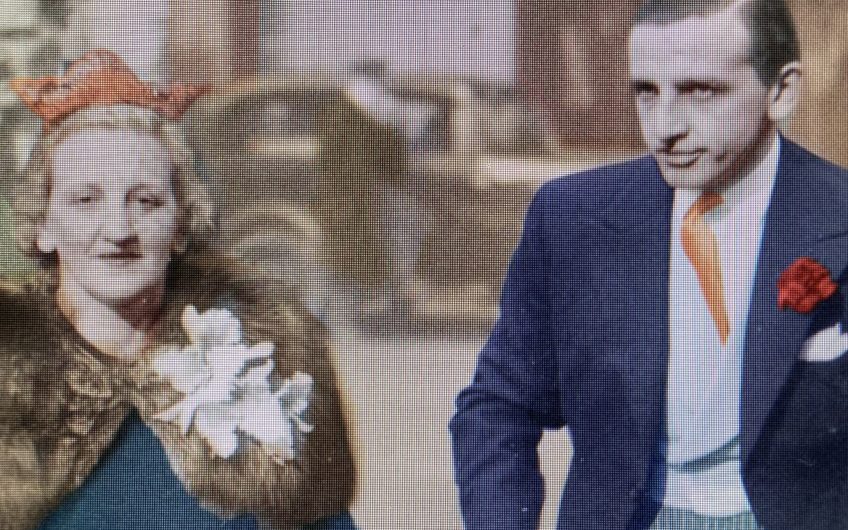 Ferdinand Mount's Aunt Munca with her son, Buster – she claimed he was her brother
View Full Size
1
of 1

In his new book, Ferdinand Mount discovers his aunt was a serial liar and bigamist who lived a life of deception for decades. Ysenda Maxtone Graham was gripped

Kiss Myself Goodbye: The Many Lives of Aunt Munca by Ferdinand Mount

Readers of Ferdinand Mount’s memoir Cold Cream may remember a mention of an aunt and uncle in the Home Counties whom Ferdinand and his sister used to be dispatched to stay with as children. We had a glimpse of the aunt in a photograph, lined up with other family members. Mount’s attention, describing that photograph, was on his mother, who, suffering from cancer, was beginning her ‘staged and graceful withdrawal from life’.

That same photograph appears in this delicious memoir-offshoot, Kiss Myself Goodbye. This time, Mount’s attention is focussed on the aunt, Aunt Betty, the wife of her father’s brother Greig Mount – a woman hard to pin down, as she appeared on her many marriage certificates in a spectrum of names, ranging from Eileen Constance Sylvia Macduff to the wholly invented concoction of Patricia Elizabeth Baring. ‘Call us Unca and Munca, like the Two Bad Mice,’ she instructed the children one day.

Who was this mysterious fairy-godmother of an aunt, who used to whisk him and his sister off in her Rolls Royce to London theatre trips, preceded by tea at Claridge’s – a hotel so familiar to her that she nicknamed it ‘The Pub’?

Well, it turns out that when their aunt took them to the Palladium, and got out of her Rolls dripping with jewels, she was two doors down from the police court where, thirty years before, she had been tried for bigamy and had astonishingly got off, although she was bigamously married, not once but three times, the third time to Unca.

When I read books about people whose lives are a tissue of lies (such as spies) my eyes often glaze over at the antics of these emotional husks. It needs a writer of wit, imagination and empathy to carry me along from one layer of the tissue to the next. Mount, luckily, is such a writer, so that even during the chapter called ‘Buster’, all about the car-racing bounder whom Munca claimed was her brother but was actually her son, and who was such an emotional peanut-shell that he had seven short marriages to seven optimistic women, I kept turning the pages.

Mount takes us on his single-minded quest to find out the truth about Munca’s life. We’re with him in the London Library when he chances upon a Country Life article about the modernist house Charters in Berkshire, which states that the inappropriately Regency-style interior décor was done by the chatelaine Doris Parkinson’s sister, Mrs G. R. Mount. Munca!

It turns out that Doris Parkinson (who entertained the Duke and Duchess of Windsor at Charters in 1947) was ‘Sheffield, through and through. So, inescapably, was Munca.’ Not the des-res part of Sheffield, but the ‘grinding, scraping and coughing lungs out’ part- so grinding that their uncle Joseph Vail had drowned himself in the canal after a final drink at the Woodbourne Hotel in 1886. An example of Mount’s ear for language is the way he uses the word ‘Sheffield’ four times in one paragraph, disabusing us of all the impressions Aunt Munca has endeavoured to give that she had a glamorous past in New York and the Philippines.

As well as an ear for the cadences of a sentence, Mount has a remarkable ability to convey the feeling of place. With a few brush-strokes he takes us, via Brightside in Sheffield, deeply into the tawdry atmosphere of Crawford Mansions in Marylebone, where in the early 1920s the adult Eileen (as Munca was namedon her birth certificate) was having an affair with Donald Clark while still married to Harold Ridge. It so happened that Mr and Mrs TS Eliot were living in the same block; Mount imagines Eliot silently lifting his Homburg to them in the entrance hall as they went off to their bigamous wedding ceremony.

Not long after this, we’re beside a hissing Russian urn in the Samovar Tea Rooms at 94 St Martin’s Lane, where Donald confronts Eileen, slamming down a divorce petition accusing her (rightly) of having an another affair.

The mixture between hilarity and poignancy is painful. Beneaththe surface of this sparklingly wry book you sense all kinds of unexplored feelings of abandonment and loss. Munca’s adopted daughter Georgie, who didn’t know she was adopted, and who wasn’t allowed to marry the love of her life David Dimblebybecause he would have found out the truth, is just one casualty of Munca’s addiction to lies. Another heartrending cameo role is played by a little girl called Celeste, whom Munca briefly adopted in 1950, and then sent back to Canada when she’d had enough of her.