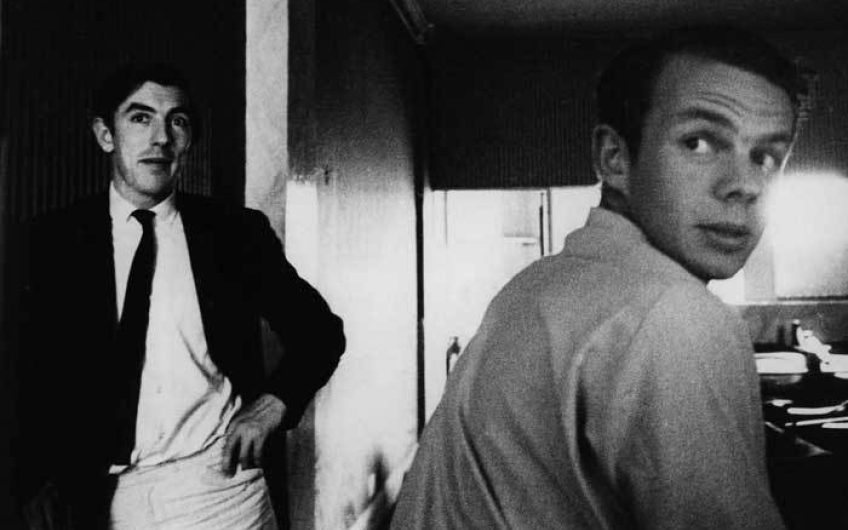 Nicholas Luard (right) with Peter Cook in 1961, working at the Establishment Club
View Full Size
1
of 1

Remember the Referendum Party, the original Brexiteers? I do.

Among the hundreds of Referendum candidates who fought the 1997 Tory-busting election that delivered Tony Blair to Downing Street was my husband, Nicholas Luard.

Sometime proprietor of Private Eye and '60s satirist along with his friend Peter Cook (pictured), Nicholas was always a man for shoving a spanner into works if the opportunity presented itself. Which, then as now, it did.

So Nicholas signed up, swallowed the Kool-Aid (sort of) and picked himself a seat. The choice was anywhere he wanted - few of the candidates had a national profile, as he did - and the seat he picked was Defence Secretary Michael Portillo's Enfield Southgate.

The choice was partly because Portillo was a friend (dog-eat-dog), but mainly because the seat was marginal enough for an outsider to tip the balance. Tories, he reasoned, were unlikely to vote for Labour (Stephen Twigg), but might do so for a Wykehamist/Cambridge grad with Private Eye connections.

The Referendum Party - as we all know but a few of us might have forgotten - was funded by financier and litigant (most famously against Private Eye) Jimmy Goldsmith and casino-owner John Aspinall (never a gambler himself, tigers preferred to people).

Both were well known to Nicholas from his short-lived gambling days at the Clermont Club – the casino for toffs and aristos with more money than sense; so not exactly a political powerhouse.

Not that I supported the proposition. I was always a natural European. Brought up as a diplomat's stepdaughter in foreign parts, I'd seen enough men with guns at borders to last a lifetime. Nicholas was certainly an Outer, though above all he liked upsetting applecarts, particularly if the barrow-boys were friends.

And anyway, I reasoned, Sir Jams was not to be trusted, Aspinall didn't like women and (forgive the lady-speak) both of them were shits.

‘No matter,’ says Nicholas. ‘We share the same ambitions. And anyway Jimmy puts up the money and provides the back-up.’

Veteran of a couple of battles to get himself elected as an Independent in Chelsea, Nicholas knew the value of back-up. He's right about the pens. Twenty years later, long after all involved, including the candidate, have left the planet, I find Referendum ballpoints (white with blue writing; made in China) lurking in corners, dry-inked, no longer fit for purpose.

On the first day of campaigning, a dozen or so assorted supporters gather, summoned by back-up, to meet their candidate at campaign headquarters - an empty shop at the lower end of the high street, on loan from a well-wisher. Among them is a volunteer in a Tyrolean hat and buttoned-up raincoat who announces himself as Joseph Goebbels. Nicholas declares him a shoo-in for the post of local agent and bestows the title of doctor. Dr. Goebbels (thick German accent; namesake no relation) immediately proves his worth with a gas canister, filling Sir Jams's white and blue Referendum balloons with helium in preparation for accosting mothers with prams on the way to the shops.

Meanwhile, Nicholas dusts down his Brigade of Guards tie, polishes the shoes to a military shine and takes the Nigel Farage option by retiring to the pub for a chat and a pint.

I've taken the May option by giving up the struggle with my Remainer conscience and setting off into the housing estate with a bundle of leaflets promoting a result I don't believe in. No one's answering doorbells on the estate - or maybe political oversell has them hiding under the table - though I notice some Referendum Party posters in windows of a row of semi-detached with gardens. Not exactly the wind of change, but enough of a breeze to send me on a recruitment trip to a clutch of antique shops in the posher part of the borough. It's the lunchtime break and the dealers have time for a chat. And no, they won't be voting Referendum, much as most may agree in principle.

Meanwhile Dr Goebbels volunteers for balloon-duty when the gates open at the nursery school just down the street. Their mothers accept the free balloons and tie them to pram handles. Blue and white balloons go bobbing up to the top of the hill and come right back down again, plastered with red stickers applied by Labour volunteers who've taken up poll position outside McDonald’s.

As soon as the booths close, all candidates are invited with agents and wives to witness the count in the school sports stadium, a vast space tall enough to serve as an airport hangar. Security checks credentials at the entrance and issues badges. A bank of televisions suspended from steel rafters in the lobby is already beaming in news from around the country. It's going to be a long hot night.

In anticipation, I repair to the café for tea and cupcakes. Nicholas, refreshed from taking the pulse of the people in the pub wanders up and down the counting-aisles with Dr Goebbels, checking the piles of votes with particular attention to spoiled papers and their comments - mostly offensive but a few enthusiastically supportive of the Referendum Party.

There are six rival independents on the ballot, including a Monster Raving Loony, all of whom are polling modestly. Referendum, to Nicholas's delight, is stacking up respectably. Midway through the count, Labour and Conservative are neck and neck. Still no sign of Portillo.

TV cameras and commentators arrive. A safe Tory seat held by a minister touted as the next Tory PM is looking wobbly – an early warning of what's already on course throughout the land.

In Enfield Southgate, now officially a marginal seat, it's becoming apparent that the difference between Twigg and Portillo is Luard. Portillo arrives at midnight, exiting the ministerial limo amid screaming sirens and leather-clad outriders. Armed police clear an undemocratic pathway for what looks like an invasion of Mafia hitmen.

The vote’s too close to call and the Returning Officer declares a recount. I return to the café for more tea and cake. Nicholas argues enthusiastically with Portillo, Twigg and the Loony over what's acceptable among the spoiled ballot-papers. The winner is announced as Stephen Twigg (these days, a Labour front-bencher). Portillo makes a graceful speech, acknowledging the fairness of the fight and departs the way he came with rather more muted fanfare.

What happened in Enfield Southgate features heavily in the news for a moment, and then moves on. Referendum polled at 1,342 – 2.9% of the vote - not bad for the party's national average. Twigg beat Portillo by 1,433 votes. Nicholas got 1,342.

In old TV clips from the count, whenever Portillo's career in politics gets a mention, Nicholas can be seen behind Twigg and Portillo, just in front of the Loony, grinning and waving.

Sic transit... or whatever goes around comes around and it'll all work out in the end - or not.

In 1997, the turnout was 70% – pretty much the same as voted in the 2016 referendum. I look forward to the EU elections on Thursday. Tea and cupcakes, anyone?

The kindness of Christopher Booker