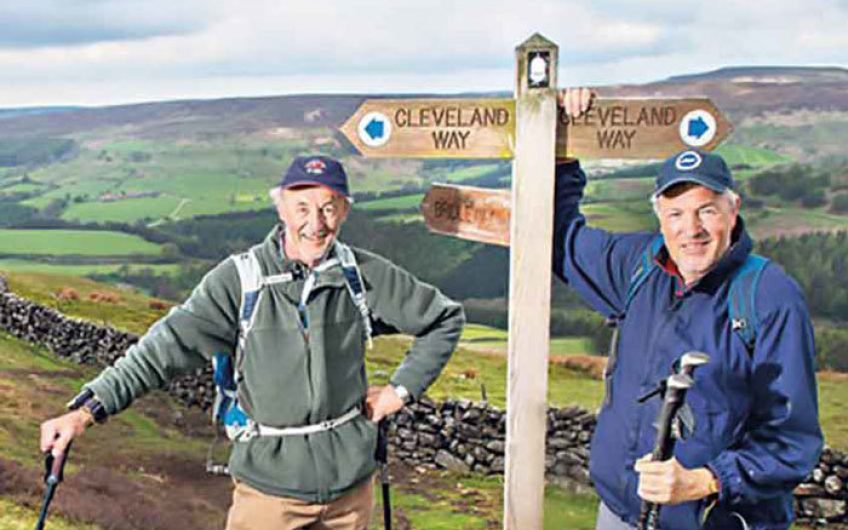 The Duke of Roxburghe has died at 64. Henry Wyndham remembers the mammoth charity walk they did together

Despite being sporty, I’ve always been physically rather idle and, at 6ft 6in, often have a bad back. I once had such terrible sciatica that I had to take an auction propped up on a special customised seat. The pain was excruciating.

I hate going to gyms but I did go once and the trainer convinced me that I was the new Steve Redgrave. I started to row as hard and fast as I could with no technique. My back was never the same again.

An endurance walk of 190 miles across the country, from St Bees Head to Robin Hood’s Bay, would never have been among my aspirations. However, in 2015, I came within one millimetre of being blinded on a grouse moor when a neighbouring gun mistakenly peppered me with 52 pellets in my face, mouth and throat, and around my eyes. The lenses of my glasses were shot out and I had 20 pellets in my chest, which penetrated three layers of clothes.

I was in shock from the impact and bled like a pig. As the Chairman of Sotheby’s, to lose my vision would have been not only a huge personal loss but a total professional one, too. The moment I realised my eyes had somehow been saved... I’m not very religious but I thought, ‘Someone up there has given me a second chance – so I need to give something back.’

After three days in an NHS ward in Durham, where they looked after me brilliantly, I retreated to my house on Colonsay. There, one night, with my face bashed up and bruised, I attracted the attention of a posh lady in a hotel bar, who obviously longed to know what had happened to me. I said, ‘I was shot rather badly on a grouse moor on Monday and I should have been blinded but I was fortunate to be wearing glasses.’

She replied, ‘Oh you were lucky, my brother was supposed to be shooting grice on Monday but it gort rained orf.’

I went to a plastic surgeon with a view to rebuilding my face, reduce my chins and turn myself into the next Brad Pitt but sadly he couldn’t really do anything because that kind of surgery was too delicate.

I told this surgeon about my desire to do something for people who have been blinded. He said, ‘Let me introduce you to an ophthalmologist called Brian Little who works for a sight-saving charity called Orbis.’

I was seduced by the statistic that, of the 105 million people in Ethiopia, 5.4 million are either partially sighted or blinded and yet 87 per cent of those 5.4 million don’t need to be. If they lived in a Western country and had access to simple operations, glasses and antibiotics, 4.7 million people would have their sight restored. In Ethiopia, the cost of a sight-restoration is as little as £10 per treatment.

I had never asked for donations before but I wrote to 1,200 people. I felt compelled to do something punishing so that people, many of them aware of my bad back, would pay up in order to inflict pain on me. I teamed up with my friend Guy Roxburghe – who also wanted to give something back by raising money for Cancer Research – and we decided to attempt Wainwright’s Coast to Coast Walk together.

One of the best ways of getting fit was walking up 500ft-high Itford Hill in Sussex each weekend for three months; three times up and down without stopping.

The fund-raising walk lasted 14 days – very physically demanding, particularly in the Lake District because the up and down is tough on the knees. We walked on average six hours a day.

Ninety per cent of our walk was absolutely beautiful. I’m afraid we didn’t camp. We both like comfort and I needed to sleep in a proper bed that was long enough for me at night – and also to take a bath after the day’s hard walking. We stayed each night in reasonable hotels and sponged off friends.

One of the most depressing things about getting old is that you’re suddenly not able to do things you used to do, but the one thing you can still do is walk. The key thing is that we used Contour Travel – they played a crucial role, shifting our luggage from A to B, helping us find accommodation, giving us all the right maps and picking up our luggage to take it to the next destinations. They will even do it for a shorter walk.

It wasn’t quite climbing Everest but it was fantastic. One thousand people donated and I raised £900,000 for Orbis. When I go to Wembley Stadium, which holds 90,000 people, it sinks in that that’s how many people benefited from this fund-raising.

Orbis’s latest project is to save 300,000 children’s eyesight in Nepal www.orbis.org.uk/en/see-my-future