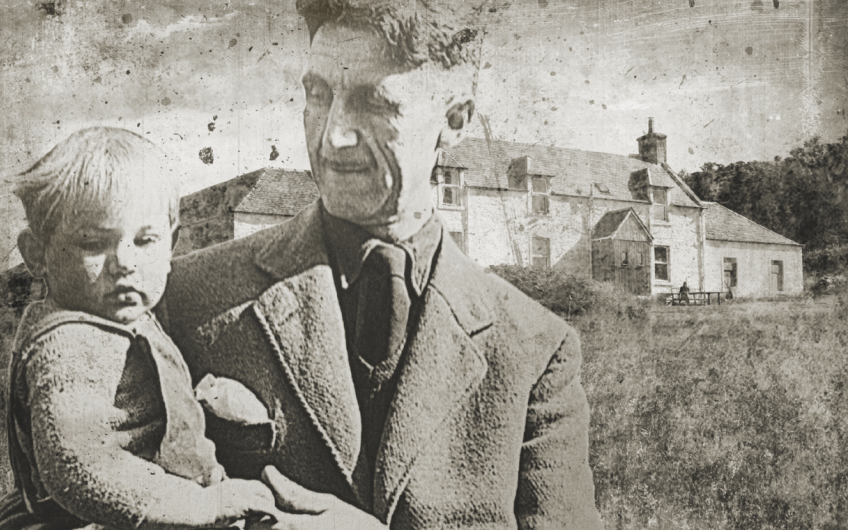 Animal Farm was published today in 1945. Annabel Sampson recalls her happy childhood on Jura, the Hebridean isle where Orwell wrote 1984, as he tried to recover from his fatal illness

It’s now 10 years since my family sold Ardfin, one of the seven estates on the island. This winter, Mum and I returned to the island for the first time since the sad day we sold our family home, Jura House. Technically, my uncle Alex owned the estate, but the whole family shared it.

Barnhill – where George Orwell lived and wrote Nineteen Eighty-Four – and Ardfin, are at polar ends of the island. But they are united by its one road. If Jura is itself hard to get to, Barnhill is the hardest point to reach. It’s at the opposite end of the island from the ferry terminal – and far from the one village, Craighouse, down twisting one-vehicle roads.

I can’t pretend my family were great Orwell fetishists, gripped by his Jura connection. But it did provide welcome background colour. Mum remembers her father, Tony Riley-Smith, diligently preparing for the year 1984 on the island. He predicted great hordes of literary pilgrims and bought a long-wheel-based Land Rover for the hotel – which he also owned, five minutes’ drive from our house – to tackle the Barnhill track, and ferry the pilgrims back and forth. There was minimal interest.

But now, seventy years on, that interest is soaring. With the presidency of Donald Trump, Nineteen Eighty-Four was a huge hit again. In January last year, when Trump was inaugurated, the book returned to Amazon’s bestseller list and featured in its ‘most ordered books in the last three years’ chart. In November last year, an Orwell statue was erected outside the BBC, his old employer.

Mum’s grandfather – my great-grandfather William Riley-Smith – bought the Ardfin estate in 1938 – by accident. He’d made the great journey from Yorkshire to see a property on Islay, only to find on arrival that it had been sold. He was tipped off that one of the estates on neighbouring Jura was available. So he bought it – without bothering to look.

Over the years, Jura’s had other claims to fame. There are the holiday visits by David Cameron, whose wife’s stepfather’s family, the Astors, own part of the island.

Then there’s the eponymous whisky. My grandfather helped re-energise the distillery in 1963, along with fellow landowner Robin Fletcher. They turned the place around after an earlier row had left the place derelict and stripped of its whisky-making apparatus, even its roof.

In a 1994 stunt, the rock band The KLF burnt a million pounds in cash in the Ardfin boathouse. They had been brought to the island by my mum’s older brother, Francis. Francis was described in the press at the time as ‘a ragged public school exile; one minute jovial, the next violently obnoxious’, which doesn’t match up with his early family nickname, ‘The Pope’.

When I was a child, we only headed towards Barnhill on day expeditions to Corryvreckan – the treacherous whirlpool that nearly killed Orwell in summer 1947.

Richard Blair, George Orwell’s adopted son who lived with him on Jura, remembers the perilous day trip. Orwell misread the tide table and attempted to cross Corryvreckan in a dinghy that capsized: ‘We got churned around and the outboard was pulled off.’

We’d have our picnic lunch – cheese scones and barley broth – overlooking the whirlpool and beyond to Scarba and Mull. There are times when the whirlpool looks deceptively insignificant; but, with the full force of the Atlantic coming in between Jura and Scarba, it can spin up into a maelstrom.

My family sold Jura House in 2010 to Greg Coffey, an Australian hedge-fund manager, known as ‘The Wizard of Oz’ for his trading prowess. He retired from the business in 2012, aged 41, with a £380 million fortune. Coffey’s offer to buy came late in the day. He jetted over for a fleeting viewing and, after a rapid inspection of the site, put the winning offer down before he even made it home. A snap decision, then – the modern equivalent of my great-grandfather all those years earlier?

Richard Blair recalled seeing an article about the sale of Jura House in The Sunday Times: the scoop being that Orwell’s cottage was part of the parcel, wrapped up in the Ardfin Estate.

Richard was quick to make the error known: ‘I wrote in a very pompous letter – that was printed – detailing the truth [that Orwell’s cottage was not part of the deal]. The correspondent was quite clearly very confused.’

Blair owns a property on the mainland opposite Jura and occasionally sails over to the island.

‘I’ve enjoyed watching the Ardfin developments,’ he says. ‘For years, it has been a construction site with very little disclosed.’

Coffey’s vision is, at last, clear: a pristine, private eighteen-hole golf course has taken shape. The immaculate, mown, green squares, set against the searing cliffs and frothing waves, are enough to make a golfer’s mouth water. The swankiest golf course has been made from the boggiest terrain.

Jura House, too, has had something of a facelift; it is now two-and-a-half times the size it was, and clad in Portuguese limestone. Our old farmstead next door – now a private hotel – has been given a smart, glass, domed ceiling, and accessorised with a smaller, twelve-hole practice course, should you fancy a round before breakfast.

So why did Orwell choose to write Nineteen Eighty-Four in Jura? Will Self – who stayed in Jura for a month in 2009 on a writer’s retreat – said, ‘Most places have a literary connection if you scratch beneath the surface. Jura’s is perhaps one of the most celebrated, but Orwell wasn’t writing about Jura, he was imagining a dystopic version of London.’

Critical essays have often tied up Jura very closely with Nineteen Eighty-Four, but I firmly believe Jura was the context, not the inspiration. Jura was merely the ‘soil’ that allowed the seed to grow.

Yes, Jura can be a primitive place; Barnhill more so than anywhere else on the island. The weather is often bleak and the deer outnumber people; so Orwell will have been lacking human comforts.

The original title he proposed – ‘The Last Man in Europe’ – may well have rung true. I expect that there will have been days on Jura when Orwell, in his tuberculosis-ridden state, will have felt like just that, ‘running on the reserve tank of his magic’, as Clive James described it.

In letters, Orwell referred to ‘a quite unendurable winter’ on Jura. The gales he hoped would assuage his tuberculosis were failing to do so. The island’s climate is little changed. Rose Fletcher, the island’s postwoman, thought last summer her wettest yet: ‘It was nonstop rain. It only stopped raining for four consecutive days in July, and three in August.’

Somehow, even through the film of rain, you’re still able to grasp the untainted natural grandeur of the island. Jura is quite impossible to resist: as Mum, Richard Blair and David Cameron have found.

Had Orwell lived longer, and had his health allowed, would he have stayed on Jura, continuing to grow his vegetables, observing the habits of the geese he kept, and tapping away at the noisy typewriter his son, Richard, remembers so clearly?

Who knows? But, having been stripped of the place ourselves, we Sampsons miss Jura hugely. The recent trip only emphasised the loss. I expect Orwell would have felt the same when he left the island for the last time in 1949.