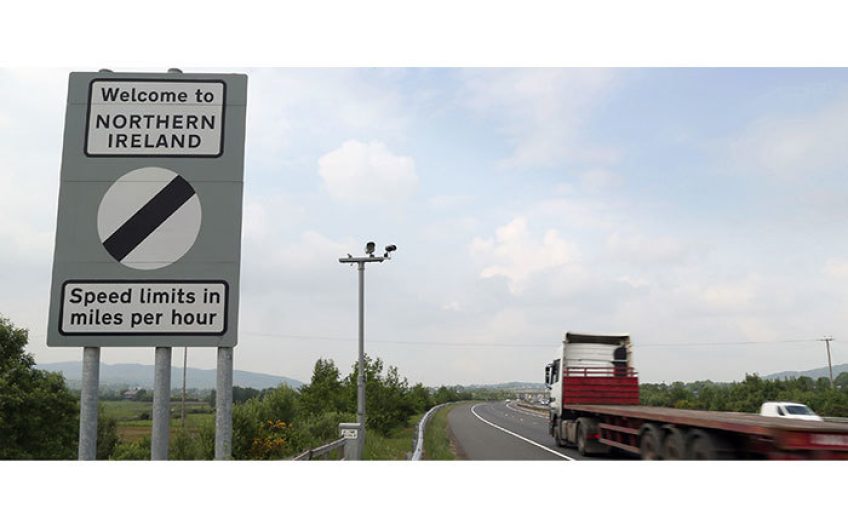 As you were: the now invisible border between Northern Ireland and the South at Newry
View Full Size
1
of 1

Dundalk, my home town in Ireland, is nicknamed ‘El Paso’, thanks to its proximity to the Ulster border, and its inhabitants are called gringos. The border itself is called bandit country. No wonder – ever since the Partition of Ireland in 1921, the border has been a hotbed of smuggling.

I was a Customs and Excise officer on the border from 2006 to 2009 – the third generation of customs officers in my family after my uncle and, before him, my Dublin-born grandfather, William Bell. He was in the old IRA and fought alongside Michael Collins in the Irish War of Independence.

The sort of smugglers my family battled for nearly a century will be delighted by Theresa May’s declaration: ‘We’re coming out of the Single Market and the Customs Union.’ These smugglers, who are often Republican paramilitaries, are set to make millions if a hard border is reintroduced.

As a child, I was very familiar with the hard border. I remember being driven to my birthplace in Newry, County Down, just across the border, to go shopping with my parents. ‘Sssshhh,’ they said, as we approached the British army watchtower at the border. ‘Don’t say anything – the people in the watchtower are listening to everything we are saying.’

When I was appointed to the Customs and Excise department in Dundalk in 2006, the hard border had been dismantled but I still dealt with some tricky customers. I had to raid illegal diesel outlets in isolated areas along the border. The smugglers bought untaxed diesel; farmers can legally buy diesel for agricultural vehicles free of tax, and most of the smugglers have farms, but it is illegal to sell it on. This untaxed, agricultural diesel is dyed green in Ireland and red in the UK. The smugglers add sulphur to remove the dye.

We once entered an illegal diesel station, whereupon the head honcho ran out the back, leaving his minions to deal with the fallout. I ran around the front to catch him but he’d managed to climb into his huge lorry parked at the back. As he drove at me at high speed, a colleague grabbed my high-vis jacket and pulled me out of harm’s way; otherwise, I’d have been flattened and killed. Had that happened, the perpetrator would have driven to safety across the border and gone into hiding until the dust settled.

When I joined the Customs in Dundalk, I was teamed up with Declan McStravick, who knew every inch of the area we patrolled, and where all the main players resided. We spent hours in our unmarked Ford Mondeo, surveilling businesses and farms. Some of the diesel-mixing tanks we found were disguised as hay bales. McStravick would pick me up at 4am to set up checkpoints, stopping cars and siphoning diesel samples. We had a white van containing the testing machine for high-sulphur diesel. A few minutes after testing the fuel, it printed out a document, showing the chemical components.

Criminal abuse of the system was rampant. A senior Revenue Commissioner and her son were sacked from the tax office after her farmer husband was found to have a diesel laundry on his land. The wife and son claimed to know nothing and I believed them. Husbands and wives have a ‘Don’t ask, don’t tell’ attitude.

Being in the Customs took a heavy toll on my social life. Many people in the border areas don’t want to be seen by the paramilitaries to be associating with law enforcers: they fear accusations of being an informer. My boss, Joe McDonnell, had his car burned out on his driveway for delving into the tax affairs of one criminal boss on the border.

The bars in town were drowning in alcohol, sourced from illegal distilleries in the Louth countryside. None of the untouchables was ever caught at these distilleries, let alone imprisoned.

Dressed in our civvies, we once visited a local pub in town, checking for counterfeit alcohol. The manager locked the storeroom and did a bunk. We then had to apply for a warrant to search the premises. In the meantime, the first pub landlord warned other landlords in town that Customs were doing a pub crawl. Some managers fled with the keys to their alcohol storerooms. In the 24 hours it took to obtain a warrant, the stock rooms were cleared of incriminating evidence.

One Saturday morning, I did a raid on Drogheda market. This big woman from the travelling community was selling cigarettes from a canvas bag. I snatched the bag; she was incensed and squared up to me. We are unarmed enforcers, with only the power of citizen arrest, but I kept my nerve and she retreated.

There is little doubt that the high command of the IRA who are today magnates of peace, such as the late Martin McGuinness, knew all about these operations. The paramilitary smugglers operated from farms and holdings that straddled both sides of the border. Petroleum, laundered diesel, pigs, cattle and grain came in one door and out the other.

Thomas ‘Slab’ Murphy is the biggest player in the smuggling racket, rumoured to be part of the Provisional IRA. He was described by Sinn Fein President and North Louth TD Gerry Adams as being ‘a good republican’ – despite Slab being sentenced to eighteen months in prison for tax evasion last year. Slab’s farm in Ballybinaby has been raided many times. But, for the residents of the county and beyond, his word is law and no one crosses him without severe retribution.

The smuggling goes back a long way – as does my family’s involvement with Customs and Excise. When the Irish Free State was established in 1922, Granddad was sent to the Donegal border near Strabane, to take up his customs duties. In the 1950s, he was transferred to the North Louth Customs and Excise as head of the department. He relocated to the town with his wife and ten children, and was put in charge of the North Louth/South Monaghan land border and Dundalk and Greenore ports – hotbeds of IRA insurgency. Customs officials in my grandfather’s department were involved in many altercations and brawls with the Republican smugglers.

As an office-bound boss, my grandfather was threatened by no one – except my grandmother. But his officers would regularly open their doors to find IRA members making threats. The officers’ military training stood them in good stead.

Paramilitary activity erupted in the Forties and Fifties, with the customs officials along the border caught up in the ensuing violence. It was dangerous to be in an isolated customs post – little more than a wooden box with a customs sign written in Irish, ‘Custaim agus Mal’.

A few years after my grandfather died in the late Fifties, my uncle took up his mantle. During his tenure, the Troubles were in full swing and the danger ever present. Customs officials had their patrol cars rammed, causing death or serious injury. They also had their cars burned out on their driveways.

During the Bobby Sands hunger strike in 1981, the Customs, in hot pursuit of a suspicious van travelling towards the border, saw the van come to an abrupt halt. Its back doors were thrown open to reveal a mounted Vickers machine gun aimed at the Customs patrol car. The customs officials swiftly withdrew.

During my uncle’s time, smuggled goods in lorries were seized and impounded in the army barracks in Dundalk, only for the criminals to arrive at night and take the impounded trucks across the fence to sell them at huge profit. Impounded goods included cigarettes, fake designer goods, laundered diesel and alcohol.

The old hard border, once patrolled by my grandfather and uncle, will be back if a hard Brexit comes about. And the old players in the smuggling racket – like Flyer Begley, Piggy Johnson, the Rat Flynn and the Mighty Quinn – will all be back, in some shape or form.

After a few years of dipping for diesel, stopping and searching cars and seizing contraband, I left the job and am now a gossip columnist on the London party circuit. The skills in both professions are related. I can easily spot a liar and, after taking abuse from hardened criminals, being told by the odd spoilt celebrity to ‘f*** off’ is strangely satisfying.

What is Heavy Metal? - Jessica Berens