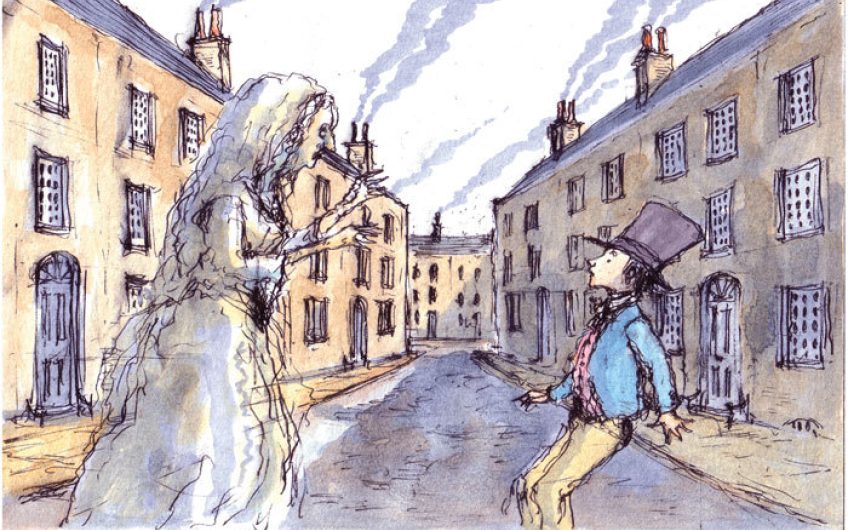 ‘But, I saw that everything within my view which ought to be white, had been white long ago, and had lost its lustre, and was faded and yellow. I saw that the bride within the bridal dress had withered like the dress, and like the flowers, and had no brightness left but the brightness of her sunken eyes. I saw that the dress had been put upon the rounded figure of a young woman, and that the figure upon which it now hung loose, had shrunk to skin and bone’ – from Great Expectations
View Full Size
1
of 1

It may come as a surprise to readers to learn that the eccentric woman who inspired Dickens’s famous character Miss Havisham lived just a block away from the offices of >span class="s1">, and used to wander along Newman Street every day up to Marylebone Church in desperate search for the Quaker who jilted her. While campaigning to save the Cleveland Street Workhouse from demolition, historian Ruth Richardson recently uncovered some fascinating secrets of nineteenth-century Marylebone. ‘I discovered there was not just one romantically disillusioned “Miss Havisham” haunting the area – but at least three and possibly a fourth,’ she explained.

As a child, Charles Dickens would pass an eccentric ‘white woman’ on his way to work at the blacking factory in Covent Garden. She lived on Berners Street, just a few doors down from his aunt. He first described her in the journal Household Words in 1853 as a ‘conceited old creature, cold and formal in manner, dressed entirely in white with a ghastly white plaiting round her head and face, inside her white bonnet.’ Dressed in a tattered bridal outfit – as if in parody – she wore for a lifetime the outfit that most brides wear just for one day as their crowning glory. ‘With white boots she picks her way through the winter dirt,’ he wrote. Half-starved and balding, her eye sockets hollow in slack and yellow skin, she shook her gnarled hands menacingly at passers-by like the boy Dickens, demanding to know where her bridegroom was hidden. ‘She went simpering mad on personal grounds alone – no doubt because a wealthy Quaker wouldn’t marry her. She is always walking up here... We observe in her mincing step and fishy eye that she intends to lead him a sharp life,’ wrote Dickens. He is likely to have adopted the unusual old English name ‘Havisham’ from a sign above a livery stable in Newman Street run by a man called George Habbijam.

Dickens’s aunt is also likely to have told him the story of a second bitter local bride – the wealthy Miss Joachim. ‘As a child her father was robbed and murdered in Regent’s Park, then she lost her reason when her mother rejected her suitor and he blew his brains out whilst sitting beside her on the sofa.’ Traumatised she became a recluse, never went out and always dressed in white. Dickens’s journal Household Words reported Miss Joachim’s death in 1850. She also lived close to his aunt.

A third crazed bride, of an older generation, lived on Oxford Street, where Dickens’s grandmother lived. ‘Having met with early disappointment in matrimony Miss Mary Lucrine vowed never to see the light of the sun. Accordingly the windows of her Oxford Street apartments were closely shut up for years, and she kept her resolution to her dying day in 1778,’ explains Richardson. Her story caught the imagination of Dickens’s favourite actor, Charles Mathews, who played her on stage, in drag, at the Adelphi in 1831, and received a great round of applause. It is likely that Dickens himself was in the audience.

On her way to Marylebone Church, ‘Miss Havisham’ would have walked past the bleak Cleveland Street workhouse where the hungry Oliver Twist pleaded for more food. At number 11 Cleveland Street, facing the grimy workhouse, she might have stopped to peer into the shop window of Mr William Sykes, who sold tallow and oil for lamps. He was living there in 1836–37 when Dickens was writing Oliver Twist, using his name for the villain Bill Sikes. She might have even seen Dickens with Bob Fagin, his older mentor at the blacking factory, exploring the local street life.

Richardson remembers growing up poor and her own parents threatening her with the workhouse in the 1950s. ‘When people living on the surrounding streets, like Newman Street, heard the clanging bell which accompanied an early morning funeral procession carrying the body of a pauper from church in Covent Garden to the Cleveland Street workhouse’s adjoining bleak burial ground, they came out to pay their last respects – and this was known as the “the nine o’clock trot”.’ As a child Dickens had probably witnessed many such processions hurrying past his home. ‘He told no one about the blacking factory or the prison and even his own children were surprised to learn the story after his death,’ says Richardson. That is why there is little known about the Cleveland Street years of his life, although he lived with his parents at 22 Cleveland Street (then 10 Norfolk Street) as a toddler between 1814 and 1816 and again as a youth from 1829 to 1831. Remarkably this building is still standing and earlier this month Richardson unveiled a blue plaque.

A few doors down from Oldie Towers, at 71 Newman Street, lived the artist Richard Dadd (1817–1886) who painted bizarre visions inspired by black magic. Whether he or ‘Miss Havisham’ ever exchanged neighbourly gossip is unrecorded. Even more deranged than the ‘white ladies’ of Marylebone, Dadd murdered his father in 1843 by cutting his throat. Soon afterwards, Dickens wrote about this in Martin Chuzzlewit.

• Dickens and the Workhouse: Oliver Twist and the London Poor by Ruth Richardson (Oxford University Press, £16.99)