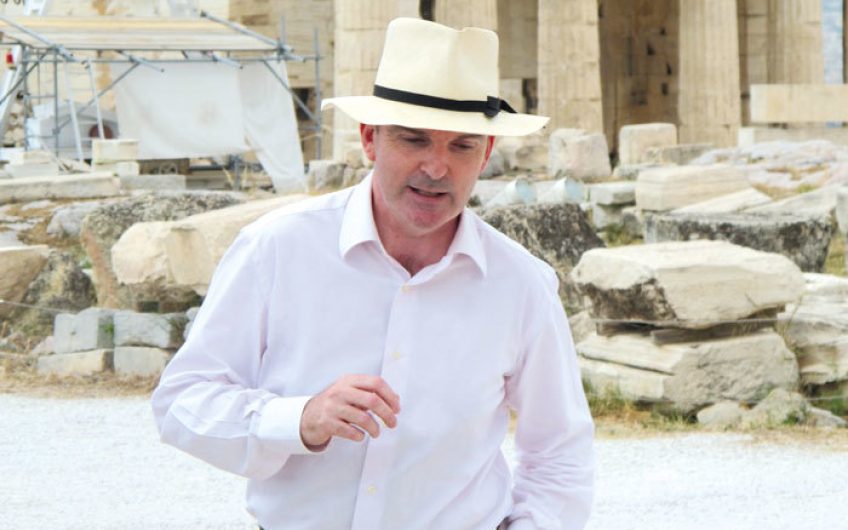 The Blue Guides, with their distinctively unshowy covers, are synonymous with the serious traveller. There are no glossy photographs and no lists of budget eateries. Practical information is kept to a minimum to allow room for dense, informative pages on history, architecture, painting and cultural curiosities. Blue Guiders do not go out of their way to rough it (leave that to the Lonely Planeteer in a rat-infested youth hostel) but will nonetheless not baulk at scrambling down sun-baked shale to get a glimpse of some scrap of antiquity bypassed by the common tourist. Not that the Blue Guider is smug exactly but, as Evelyn Waugh rightly observed, ‘The tourist is the other fellow’.

Last year saw the centenary of the first Blue Guide. It was produced by the Muirhead brothers, James and Findlay, who, since 1887, had been publishing the English editions of the celebrated German Baedeker guides and in 1915 had acquired the rights to the celebrated John Murray handbooks. In the 19th century, no one left Britain without a Baedeker or a Murray handbook in their armoury: how else to navigate the impossible foreignness of abroad and its residents? ‘Tut, tut, Miss Lucy! I hope we shall soon emancipate you from Baedeker,’ says E M Forster’s intrepid Eleanor Lavish (traveller not tourist), to Lucy Honeychurch (tourist not traveller).

London and its Environs, was published simultaneously by Hachette in French as Guide Bleu Londres et ses Environs, as were succeeding books until the 1920s. In the 100 years since, Blue Guides have covered cultural spots across the world, including Transylvania and Staten Island.

Findlay’s son Russell became chief editor, retiring in 1963, and Somerset Books acquired the guides in 2004. The most recent is the updated guide to Budapest, complete with 500 pages of information, maps and opening times to every corner of the city.

The Blue Guide’s cover no longer has that familiar cobalt blue stripe. It is now more an architectural-blueprint kind of greeny blue with a line drawing illustration. There have been some concessions to the modern consumer (more on food and shopping) but on the whole, it is as compendious as even Miss Lavish could desire.

If you are looking (and many do) for a guide to the Greek Islands, then a Blue Guide classic is Nigel McGilchrist’s volume on the Cyclades. Among serious Blue Guiders in Greece (and Italy), art historian, writer and lecturer McGilchrist is a legend. But when he was asked nearly 20 years ago to update the guide to the Greek islands, he hadn’t envisaged what a vast, enthralling task it would turn out to be. Eight years later, in 2010, when he finally submitted his manuscript, his Blue Guide publishers were unsurprisingly taken aback by a word count that ran into millions, at least two-thirds more than had been commissioned. They therefore abbreviated the original and allowed him to buy the rights to the rest of the work – which he now publishes himself under the imprint Genius Loci. They are beautifully produced, in the old-fashioned blue and white of the 1930s and 1940s (and the Greek flag), and the reader can roam over 70 islands in 20 volumes with 120 maps and 3,400 pages.

After Oxford, McGilchrist, a fresco-conservation specialist, was Director of Rome’s Anglo-Italian Institute and taught at American and Italian universities. And then he embarked on his extraordinary series of guidebooks.

Anyone who wants to do more than visit an island to lie on a sun-lounger should equip themselves with a McGilchrist guide. I took one with me to Kythera a few years ago. Panting under a baking August sun and unable to rouse my companions from the beach, I hired a car and followed McGilchrist round the island page by page, finding surprises that I would never have encountered without him.

His guides have a vivid, enthusiastic brevity that is infectious. Here is how he introduces Kythera: ‘There is nothing particularly grand or showy here, yet no visitor can fail to be struck by the island’s charm, or by the density and variety of its modest size: churches, landscapes, ruins, houses, caves, ravines, villages – there is no corner that is not rich in interest and beauty, natural or man-made.’

He actually lives on Kythera, inspired four years ago to restore a building he had first seen on his researches. After 35 years living in Italy, he had wanted to find a place that felt untouched. ‘I just felt that I was changing and Italy was changing and the windows of pleasure were closing. There were roads and building and so on. I wanted an island not completely given over to tourism.’

Kythera, on the very south-eastern tip of the Peloponnese, at the end of the ferry line, is somewhere no one visits on the way to somewhere else – and as a result (because visitors apparently like to island hop) is relatively free of mass tourism. So McGilchrist now lives there, when he is not travelling, in an old house, with vaulted rooms big enough for all his books, a bike ride away from the inland village of Mylopotamos.

McGilchrist’s guides are, he muses, ‘intended for people looking for things that are not obvious: the unsung life and history and spirit of the islands. The spirit of place.’ He mostly worked on two islands at a time, while big ones such as Rhodes and Samos he visited several times over many months. ‘It was very solitary work. Lots of getting up early, setting off with only figs and nuts for lunch and then writing up observations in a notebook that evening.’ One has to get it down quick, he says, to capture the moment and the atmosphere.

Refreshingly, he can’t be doing with ‘all this bowing to the canon’ and he is as intrigued by the mysterious fragment as the huge monument, by the obscure as well as the sensational. ‘There is something everywhere and it’s the surprisingness that delights.’ Most of all, it’s the context in which something is discovered: ‘It’s not always about the grand or important things – it’s the story that they tell. Mosaics, for example, that tell a story. In Karpathos, for example, they are right there on the beach. Looking at them there you really get the feeling of the spread of Christianity.’

Tourism has been a blight on many of the islands. The fascinating Santorini has become a favourite venue for Chinese weddings and vast cruiseships – and visitors are packed chock-a-block along the narrow streets of Ora vying for space with bridal couples taking selfies against the sunset. ‘I don’t know when it’s going to end,’ McGilchrist says, reflecting on the ‘lines and lines’ of cruise passengers who get off at the deep harbour of Patmos and make their way to the tiny monastery of St John for an obligatory stop over. ‘It’s supposed to be a place of retreat.’

But there are other islands, he says, which have remained startlingly unspoilt, ‘where little has changed for 100 years’, like Amorgos, Samothrace and (just 12 miles from Santorini) Anaphi.

McGilchrist’s Blue Guide odyssey was never much of a business proposition – ‘It was very definitely a labour of love rather than profit.’ But like the best writing, his guides speak direct to the like-minded enthusiast, to the fellow traveller, the fossicker and the curious: ‘Above all, it has made me happy to have put them out there.’

‘The Blue Guide to Budapest’ by Annabel Barber (Somerset Publications £16.95)