This is our 9th Brexit, says Simon Jenkins 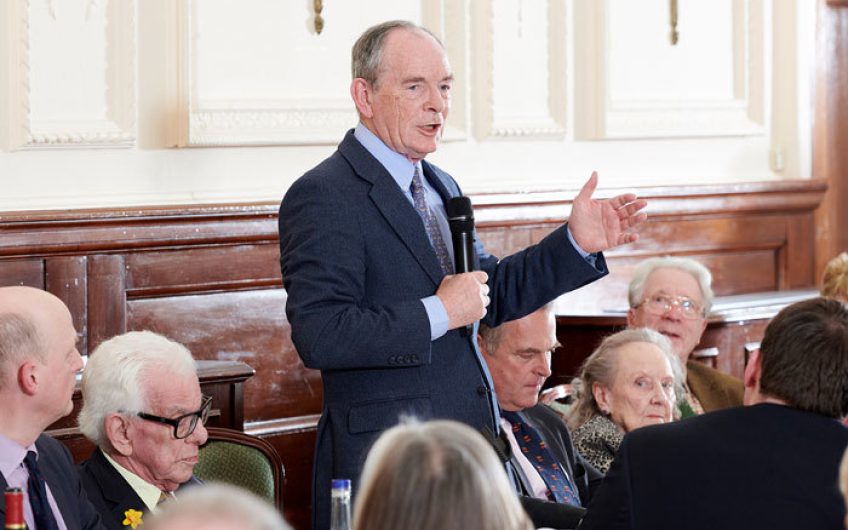 The Oldie’s Editor, Harry Mount, welcomed the readers and speakers to Simpson’s. He began with a moving toast to Edward Enfield, who died two weeks ago. Enfield, the father of comedian Harry Enfield, was recruited as a columnist by Richard Ingrams in 1992 and he soon became on Oldie favourite. He was the definitive oldie.

Barry Cryer was back with us, having recovered from fracturing his femur – or, as he put it, having ‘joined the hip-op generation’. His parrot joke was, as always, evergreen.

David Gilmour gave a gripping talk about the social history of India during the British Raj.

He recalled his gap year in 1971, when he me Vijaya Lakshmi Pandit, Nehru’s sister and Indira Gandhi’s aunt. Distressed at his hippy outfit and guitar-strumming, she compared him unfavourably with earlier British visitors to India, who would climb the neighbouring mountain before breakfast. His book The British in India is not a defence or a critique of the British Empire; neither is it a study of empire builders, like Robert Clive. It is an examination of those British who found themselves – often entirely by chance – in India during the Raj.

Simon Jenkins followed David Gilmour with his thrilling talk about his book A Short History of Europe.

As with one of his previous books, A Short History of England, he fell in love with his subject.

Covering the history of Europe at such a tense moment in its history, was not altogether planned. He signed up to the idea on the day of this country’s decision to leave the EU.

On the topic of Brexit, during his research, Jenkins found that Britain had ‘left’ Europe on no less than nine separate occasions and had rejoined eight times… wait for it! It just goes to show that the only power greater than history is geography. The constant back and forth, said Jenkins, was an inevitable result of Britain’s position on the edge of Europe, doomed to be half-in, half-out.

Finally, George Courtauld regaled us with his memoir of three weight-watchers. He and his two friends initially came together to help one of their number prepare for a possible appearance on television. To that end, they read up on the Hay, Eskimo, plant, Atkins, grapefruit, palaeolithic, and even the dreaded cabbage diet.

Unlike your common-or-garden diet book, Courtauld’s Three Men on a Diet is ‘not an instruction manual’ that only automatons can follow, but the diary of ‘three fallible fatsos’, filled with rivalry, greed, a few genuine health scares and some unorthodox dining gear: one of the three, in sheer desperation, donned a full Lycra suit and a bowler hat at meals in a desperate attempt to humiliate himself into losing weight.

Once again, we thank the wonderful Simpson’s team, who put on such a lovely spread for us, and Noble Caledonia, without whose dedicated support we could not bring you such good lunches for such reasonable prices.