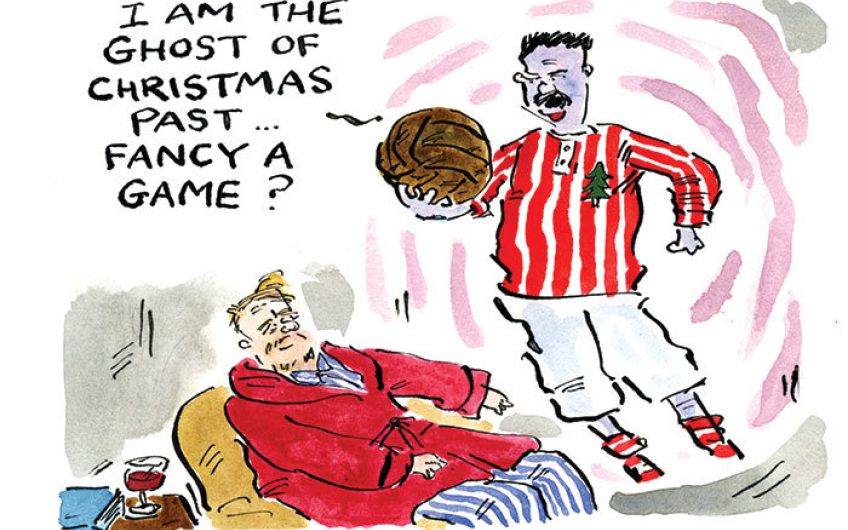 Christmas? Once every five years would be enough. However, since this is almost certainly my last, I have been letting my mind drift back over the 81 Christmases I have spent on this earth.

Boyhood Christmases (in war-time) were dominated by my mother, who was German. We were, understandably, not the most popular family in the village. We celebrated on Christmas Eve with real candles on the tree – fairy lights were unthinkable – and gifts to be distributed right away. On these occasions, my mother played the piano and sang – surprisingly well. The only present I can remember with any clarity was a beautiful leather football which I took to bed with me. There is a sense in which that football represented, and still represents, the true meaning of Christmas to me.

Teenage Christmases are a blank, apart from one at my Aunt Dolly’s in upmarket Hadley Wood when to my amazement, Aunt Dolly and I both got drunk and ended up on the floor. Enough said.

National service in Germany (BAOR) marked my first Christmas away from home. I went to Hanover, to my mother’s older sister, who did her best to make me less unhappy.

In recent years, I have discovered that Christmas in France is more enjoyable – and shorter – than here. Midnight Mass, one good lunch next day, and it’s all over. It does not drag on for two weeks, as it does in the UK. A Christmas I spent in France in 1961, after I left Oxford, led directly to my getting into the BBC.

The best Christmases of all were when I was first married and my children were small. Leaving my wife to do the preparations I would take them to London Zoo on Christmas Eve – the best day in the year to visit because the zoo remains open and one has the place almost to oneself. (My children still treasure these visits and their memories of them.) The only other people we ran into were friends of mine to whom I had recommended the practice. There was also the occasional party of what we used to call ‘orphans’ – my children were extremely pleased and relieved not to be included among them.

After I was divorced in 1978 I remember nothing except spending miserable Christmases alone or with friends who felt sorry for me and yet got annoyed when I didn’t (or couldn’t) join in the fun. Since then, I have become more resilient and actually enjoy spending Christmas on my own.

Anyway, in spite of everything, Happy Christmas!

King of the Trump impersonators