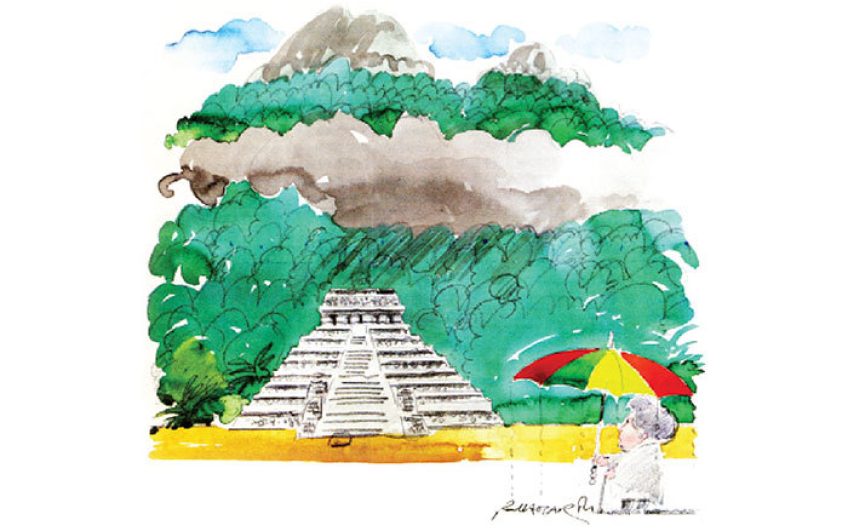 It was through a friend of a friend that I came to be secretary/PA to Dame Rebecca West for a year or so from 1969. She had not been very worried when I confessed that I had read very little of her work. Her only comment had been, ‘At least you’re honest.’ She also took it for granted that I could type, write shorthand and manage her accounts.

Dame Rebecca, or Dame Cecily Andrews, or Dame Cecily Fairfield, as she was variously known, had recently lost her husband, the merchant banker Henry Andrews. She had neither the will nor, I think, the wherewithal to continue living in Ibstone House in the Chilterns with its indoor and outdoor staff, and moved to a large, inconveniently laid out flat in Kingston House North, Princes Gate, not far from the Albert Hall. The flat was crammed with furniture from Ibstone House, a lifetime of priceless glass, china and cutlery from years of entertaining, and pictures – pictures covering every wall of every room, mostly originals and easily identifiable as Picassos, Dufys and other, older, artists. Dame Rebecca would proudly point out which were gifts from the artists and which she had ‘acquired’. I think she had been good at ‘acquiring’ objects that caught her eye. The fireplace in the drawing-room was made of outstandingly beautiful eighteenth-century hand-painted porcelain, which she told me she had seen in a bombed house during the war and paid some men £5 to take out and carry away for her.

This amazing old lady lived her life exactly as it pleased her to. I would arrive at about 10am each day and let myself in, picking up the post. She was invariably still in bed with the newspapers, a tray of tea and a pair of scissors, industriously cutting out items of interest. She would call out as soon as she heard me, going straight into a conversation about what she was interested in and leaving me to pick up the thread as best I could. Although she kept an engagement diary it didn’t mean much, since she would change her mind from hour to hour – but woe betide anyone who let her down! There was a telephone in every room, even the bathroom, and Dame Rebecca would wander from room to room, picking up the nearest telephone to call someone as the fancy took her and yelling at me to get off the line if I was in the middle of a call. While at home she would drink tea or coffee and eat biscuits without stopping, talking all the time and spitting out biscuit crumbs as she spoke. I soon got used to wiping out the mouthpiece when I used the phone.

Unless Dame Rebecca had a morning appointment she would take her time about getting up, having a bath, wandering around in her underwear and talking, talking, always talking. She walked with a curious rolling movement as both legs were swollen and her feet overlapped her shoes. Her hair had thinned with age and when anyone was expected, or she was going out, she would jam her wig on her head anyhow. I think it gave her a degree of confidence to feel it was there, although it looked no more natural than if she was wearing a hat. Her eyes were dark brown and deep set, and she saw a great deal more than many people realised until they read her books and articles. Her favourite scent was Hermès ‘Calèche’ which she used lavishly, sometimes sending passers-by reeling.

Dame Rebecca could be ruthless over what many people would not worry too much about. New curtains had been ordered for the drawing-room as she was not happy with those brought from Ibstone House. They were handmade from beautiful, gleaming, oyster-coloured silk, stiffened and lined to hang in precise folds, and so heavy that it took two men to lift each one. They had been sent back several times as Dame Rebecca found infinitesimal faults, but one day the men from the makers came to fit the poles and adjust the cords before the curtains were hung.

When the curtains were all in place – and the windows went round two sides of the drawing-room – the foreman demonstrated to Dame Rebecca how the cords worked, one to close them and one to open them, with a firm but gentle pull. Cutting the poor man short mid-explanation, she took hold of the first cord and yanked hard. Nothing happened and she yanked again. She had pulled the wrong cord and the effort she put into it pulled the pole off the bracket and the end of the curtain off the pole. Uttering one word, ‘No!!!’, Dame Rebecca walked out of the drawing-room, slamming the door. The workmen and I stood looking at each other until her voice was heard calling me from the study. She was on the telephone to the curtain company. ‘Idiots, dolts, buffoons,’ she was saying. ‘Send me someone immediately who can do a proper job. And they can take the curtains away, they’re ruined.’

Not many days went by without guests for luncheon, most of them well known. I remember the day the Muggeridges came. Both Malcolm and Dame Rebecca talked non-stop, neither listening to the other.

Although she could be kind and generous to people she liked (and who conformed to her ways), it was obvious that Dame Rebecca considered herself intellectually far superior to the majority of people around her. She had a number of friends, mostly widows like herself or sad elderly ladies who had never married, whom she managed for their own good. Some of them tried to stand up to her, but even they usually gave in for the sake of peace and quiet.

She decided eventually that she would go to New York and Mexico over Christmas 1969. I was to manage everything while she was away, and Augustina, the Spanish maid, would stay on to keep the flat clean. There was not a lot to do while Dame Rebecca was away. I arrived at the flat each morning, opened the post and, once her letters began to arrive, carried out her instructions. Augustina came each morning, vacuumed, dusted and polished like a whirling dervish. She was a little round dumpy figure dressed all in black apart from an old brown overcoat that looked like army surplus. She spoke only enough English to communicate with anyone on a very basic level and always said goodbye to me in Spanish while taking a holey pair of woollen gloves out of her coat pocket and ramming her hands into them. She never carried a bag of any sort and stuck her hands in her pockets as I closed the front door after her.

In the New Year of 1970, I succumbed to the flu epidemic and had to stay at home for a week. I telephoned the head porter at Kingston House to tell Augustina that I was ill and she need not go in every day. She did not have a key, so a porter would let her into the flat and lock up after her.

About a week after Dame Rebecca’s arrival home I arrived one morning to find her still in bed but surrounded by plastic bags full of necklaces – some valuable, and some downright tatty. She immediately demanded where a certain jade necklace was and I could only say I hadn’t seen it. ‘It’s in one of the chests of drawers in one of the spare rooms,’ she said, and then began a hunt through the spare bedrooms and the rooms in the maids’ quarters, all crammed with furniture from Ibstone House. Dame Rebecca demanded the inventory for the contents of the flat, which turned out to be at her solicitors. I had not even known there was one, let alone seen it. However, her memory for her possessions was formidable and when we checked against the inventory we found an incredible amount of things missing, from jewellery to pictures, linen, china and glass, pots and pans and other sundry items. Naturally, the police were called and I felt completely responsible for the whole thing, although Dame Rebecca said she didn’t blame me. There was absolutely no sign of forced entry into the flat: as the only people who had keys apart from Dame Rebecca were the head porter and me, we both felt we were prime suspects.

Augustina had already been ‘let go’, as Dame Rebecca had decided she couldn’t stand the sight of the small black figure around the place any longer. The police were interested to hear about her. When they went to her address they found an Aladdin’s cave. All Dame Rebecca’s possessions were there, crammed into the room in which she lived together with innumerable items from hotels where she had worked in the past, including a dozen brand-new rubber hot water bottles, hundreds of salt and pepper pots and piles of linen. Nothing she had taken had been sold. She was a compulsive kleptomaniac. I think she was eventually deported back to Spain, where she was also wanted by the police. But the mystery remains – how did she get even the small things out of the flat and past the porters, let alone large items such as pictures, when she never had so much as a shopping bag? The police found the old brown coat she always wore, suspecting at least poacher’s pockets, but there was nothing.

Dame Rebecca gradually came to realise that it was very unlikely she would produce another book. She was old and tired and everything was becoming an effort. I left her each afternoon settled in the drawing-room with a tray of tea – and biscuits! – in front of the television watching Crossroads, which fascinated her.

I was sorry to leave, despite all the ups and downs, but we parted on good terms. From time to time she would telephone me ‘just for a chat, my dear Gill’ – the ‘chat’ turning into a monologue that went on for a very long time!