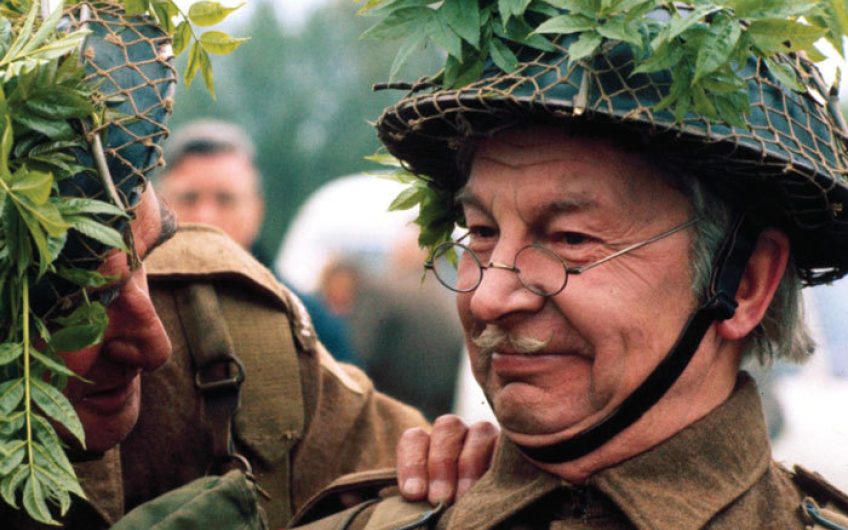 ‘What is it like being 92?’ I asked Clive Dunn when I visited him at his house on the outskirts of Boliqueime, a village in the Algarve, in September. A stupid question deserves an impish, quick-witted reply. ‘It’s like being 91,’ he said, with a grin. His wife Cilla (the actress Priscilla Morgan), to whom he has been happily married for 53 years, is 78, and their dog Daisy, an affectionate and doting golden retriever, is ten, which might be deemed late middle age in canine terms.

Daisy is totally deaf and Clive partially so. He is also virtually blind, which means that he has had to abandon the second most important vocation in his life – that of painting and drawing. The Dunns had a studio built on their property some time ago and Clive talks wistfully of the many pleasurable hours he spent there, working at his portraits, landscapes and seascapes. His youngest daughter, Jessica, inherited this talent and became a professional artist. Her paintings are intermingled with his on the studio’s walls.

I was entranced by Clive and Cilla soon after meeting them. Over dinner in an excellent fish restaurant, we swapped anecdotes and jokes, and it was when the two of them praised the actor Wilfrid Lawson for his heart-wrenching performance in The Wooden Dish, a long-forgotten play about an old man considered difficult by his family, that I knew they were fellow spirits. They talked appreciatively of Edith Evans, who provided the wedding cake when they married in Stratford-on-Avon in 1959, and of the young Albert Finney, who presented the newlyweds with a cardboard box filled with fruit and vegetables. Their nuptials were celebrated in the Juliet Room in a nearby country hotel, where they tuned into the latest episode of The Archers and Clive disposed of the occasional intrusive spider by throwing it out of the window. Then it was back to work for Cilla, who had a performance of All’s Well That Ends Well the following evening.

Clive Dunn was 48 when he accepted, after some hesitation because his close friend John Le Mesurier was hesitating too, the role of Lance Corporal Jones, the bumbling old butcher who recalls fighting the ‘fuzzy-wuzzies’, in the imperishable sitcom Dad’s Army. On hearing that John had agreed to play the absent-minded Sergeant Wilson, Clive told his agent to say yes to the offer. It was, perhaps, the wisest decision of his career, for in only a matter of months Jones, Wilson and Captain Mainwaring (pronounced, with typically English perversity, as ‘Mannering’) became household names. The idiosyncrasies of these members of the Home Guard in Walmington-on-Sea were the subject of amused conversation up and down the land, while their catchphrases – ‘Stupid boy’ spoken by the pompous Mainwaring (the incomparable Arthur Lowe) with barely contained exasperation, and Jones’s jittery ‘Don’t panic!’ – were impersonated by many of the show’s admirers.

The reason for Dad’s Army’s enduring popularity is simple: the characters created by Jimmy Perry and David Croft are recognisable human beings rather than vehicles for one-liners written with well-known comedians in mind. Clive is saddened by the fact that he wasn’t invited to speak at David Croft’s funeral service in St Martin-in-the-Fields, despite his expressed desire to do so. He observed, with the trace of a smile, that he was probably rejected as a result of a speech he had once made praising Dad’s Army for the innocence of its comedy. There were no offensive swear words and no smutty innuendoes. He ended with the rhetorical question ‘Isn’t that fucking marvellous?’ It was the choice of adjective that did for him.

Clive speaks fondly of the cast of Dad’s Army. He retains special affection for James Beck, the original Private Joe Walker, who died suddenly during the filming of the sixth series at the age of 44. ‘He was a very clever actor and a delight to work with.’ Then there was John Laurie, the grizzled and grumpy Private Frazer, who had appeared in Shakespeare at Stratford and the Old Vic. ‘He had a very dim view of actors and often said so in words that can’t be repeated.’ Arnold Ridley, who played the ancient Private Godfrey, wrote the constantly performed The Ghost Train but received very little money from it because of his failure to maintain the copyright, and this was typical of a certain other-worldly quality in his character. Both Laurie and Ridley had fought in the First World War.

But the man Clive loved most was John Le Mesurier. Easily bored, when Le Mesurier was staying with Clive and Cilla in Portugal, he announced that he couldn’t think of anything worse than sunbathing by the pool. He wanted to see and listen to eccentric individuals and, in the company of the Dunns’ daughters, went to cafés or bars in search of them. John disliked the honours system and hated the idea of actors accepting them. ‘Dear boy, how could you?’ he remarked on hearing that Clive had received an OBE.

I watched a repeat of Dad’s Army with Clive and Cilla on their widescreen television. He confessed that he couldn’t see much of what was going on. At one point I turned to look at him and noticed that he was mouthing the lines he had spoken forty years earlier. It was a touching, unforgettable, moment.

Clive first played an old man when he was nineteen, in a production of J M Barrie’s whimsical play Mary Rose for a weekly repertory company in Abergavenny. He was working as an assistant stage manager as well as playing small parts during that idyllic summer of 1939. Then, as autumn approached, with war in Europe looking ever more likely, the Gwent Players were disbanded, and he returned to London penniless. His attempts to be enlisted in the army, the navy and the air force were dismissed by a succession of stubborn recruiting officers. On the verge of despair, he applied for a job with the Auxiliary Ambulance Service and was told to start work the next morning on a salary of £3 a week. The ‘ambulances’ included Harrods delivery vans. He became adept at first aid, a skill he would employ to life-saving effect when he finally saw conflict as a private in the 4th Hussars, whose polo-playing and duck-shooting officers filled him with a disgust he still talks about. (He and Cilla have voted Labour all their lives.)

His wartime experiences, which included day-long marches in tropical heat and freezing cold, are recounted in his engaging 1986 autobiography, entitled, courtesy of another Jones catchphrase, Permission to Speak. Describing nightmarish, and sometimes surreal, events, his tone is both humorous and stoical. He was a prisoner-of-war for over four years, one of the lighter aspects of which was his chance to perform as the leading lady in Ivor Novello’s operetta Glamorous Night, written for the actress and singer Mary Ellis, who lived to be 105. (When interviewed by a reporter who congratulated her on achieving that great age, Ellis snapped back ‘I am not 105, I am 104’ – a story relished by the Dunns as we tucked into clams and sea bass.) But otherwise, wartime life – in Greece, Macedonia, Egypt, Yugoslavia and Austria, where he was imprisoned – was often grim, with near-starvation and death everyday realities. No wonder he enjoyed the sublime silliness of Lance Corporal Jones.

Clive was christened Robert by Robert Gladstone Dunn and his wife Connie, who were entertainers in concert parties and revues, much like those described by J B Priestley in his novel The Good Companions. Connie was playing Weston-super-Mare, one of the regular seaside venues, when little Robert, who was eight, appeared in front of the footlights for the first time. He learned to sing and dance at an early age, but his progress as a child entertainer was halted when it was decided he should receive a conventional education at boarding school. He remembers those schools with horror, and recalls the relief he felt when he was liberated from them. He studied acting, singing and dancing at the legendary establishment run by Miss Italia Conti, as a result of which he secured the role of Slightly in Peter Pan. He had renamed himself Clive, so that he wouldn’t be confused with his father, whose favourite song was ‘Who looks after the green-keeper’s daughter, while the green-keeper’s seeing to his greens?’.

After being demobilised in 1946 he accepted work whenever it was offered. He began to be noticed as an unusually versatile comic actor at the Players’ Theatre, under the arches at Charing Cross station. Despite the derisory pay – £6 for a single act, £8 for two – those years in music hall were to prove beneficial. His gifts were spotted by television producers, and in the 1960s he was in the sitcom Bootsie and Snudge, alongside Bill Fraser and Alfie Bass.

He played an old man, of course, as he was later to do in the children’s series Grandad.

Clive and Cilla have lived in Boliqueime for thirty years. Their house is a real homestead, unlike the ostentatious villas with which many British celebrities have littered the Algarve. They bought the cottage that forms the main part of the building from its Portuguese owner, who named her price – £4,500 – and wouldn’t budge. She got what she wanted, and the Dunns moved in, having sold their house in Barnes and acquired a flat in west London. Cilla is an imaginative gardener, and her multi-levelled garden was ablaze with colour in September. She grows vegetables for the family – their daughters Polly and Jessica live nearby. Their granddaughters, Alice and Lydia, named after Clive’s beloved aunts, who were benign presences throughout his childhood, are constant visitors.

Clive has fallen victim to some of the indignities of old age, but he is youthful in every other respect. He has a healthy laugh and a quick intelligence. I think that ‘humorous’ and ‘stoical’ come close enough to describing a man who has encountered the very worst and the very best things that life presents us with.

The puffins of Skomer - Harry Mount