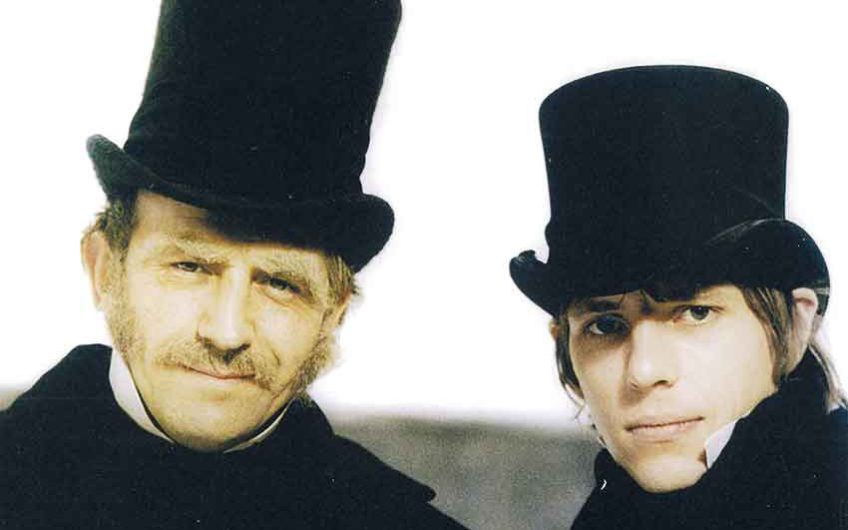 Men in black: Leonard Rossiter and Cranham on set – by Harry Secombe
View Full Size
1
of 1

When Kenneth Cranham acted in Oliver!, he loved the American production values – and was photographed by Harry Secombe

In 1967, I was given the role of Noah Claypole in the film of Oliver!.

What luck. Five days’ filming at £50 a day – and, at the same time, playing Hal in Joe Orton’s Loot at the Criterion Theatre, which the previous year had won the Evening Standard Best Play award. I was 22 at the time.

Jane Asher brought Paul McCartney to see Loot. He said most plays gave him a pain in the arse but he loved this one and wanted it to last longer.

Meetings were even arranged between Joe and Brian Epstein, the Beatles’ manager, to discuss Joe writing the script for their next film.

The late ’60s were like a surfboard that everyone, young and old, was riding, waiting to be enthralled by what the Beatles and their acolytes did next.

At Shepperton, where Oliver! was filmed, they were also making a Swinging London ’60s film, called Salt and Pepper, starring Sammy Davis Jr and Peter Lawford. After work, Sammy and Peter would cruise the King’s Road together in an open-top car. The film isn’t shown much these days. But there is a compilation of Magnum images from the ’60s taken by Eve Arnold. One of them has Sammy Davis Jr, eyes closed, lost in reverie, wearing love beads, a real gone cat with a silver-clad, mini-skirted go-go dancer in attendance. It looks far more dated today than Oliver!.

I went out to Shepperton before filming started, for a costume-fitting. On the train on the way back to London, I saw Judi Dench. I recognised her from having seen her at the Old Vic with Tommy Steele in She Stoops to Conquer.

I introduced myself and we talked all the way back to central London. I asked her how long she’d been acting.

‘Twelve years,’ she told me.

Oliver! had American funding – and they knew how to spend it. They built Victorian London at Shepperton. There were streets, markets, bridges, riversides, quicksand, pools of mud, beer halls, Fagin’s den and all its warrens.

And, in the distance, as far away as the eye could see, there was a railway bridge, with a real Victorian train chuffing across it.

The backdrop of the Who Will Buy? sequence – which people think is a real Georgian square that they recognise – was just a façade. You opened one of the doors and there was just mud behind it.

So much energy: hundreds of dancers; Oliver Reed creeping about, frightening people – and succeeding.

You blended into it all – you were wearing Victorian clothes in funereal black, with a top hat. It was like finding yourself in William Powell Frith’s masterpiece, The Derby Day. None of it was CGI. All of it was three-dimensional.

After Oliver dares to ask for a move from the orphanage, he is offloaded by Mr Bumble, played by Harry Secombe, who leads him through the street, singing Boy for Sale.

What amazed me was that the street had been built indoors, inside a soundstage. If you looked up, you could see the soles of the shoes of the men dropping artificial snow from above. A dog was set off across the ground, a blacksmith was shoeing a horse and at the end of the street was Mr Sowerberry, played by Leonard Rossiter. The first interested buyer of the boy, he is an undertaker who thinks he might be of use in the elaborate funeral processions Victorians liked.

Mrs Sowerberry, played by Hylda Baker, is not so keen on the extra cost of the boy’s upkeep. My character, Noah Claypole, the charity boy working for the Sowerberrys, is already resentful.

Noah confronts Oliver in this scene from the screenplay:

OLIVER: You leave my mother out of it. She’s dead.

NOAH: What did she die of? Shortage of breath?

OLIVER: You’d better not say anything about her to me.

NOAH: Better not? Better not? Don’t you be cheeky, Work’ouse. Your mother! She was a nice ’un! A regular right-down bad ’un, she was!

A fight ensues. Noah is knocked to the ground. He gets to his feet, grabs Oliver, shoves him into an open coffin and sits on the lid.

Noah Claypole is the first character to attack Oliver maliciously, making spiteful remarks about his dead mother. I’ve met many adults, years later, who’ve never forgiven me. One director had lost his mother at the age of eight and identified totally with the film. He was appalled to be in the company of this demon from his nightmares.

Hylda Baker was the only actor who had the foresight to book a table at the restaurant in Shepperton. We had an hour for lunch – so we sat in costume in our funeral-parlour clothes. Sammy Davis Jr and Peter Lawford came over to introduce themselves and shake our hands. I looked forward to telling the cast of Loot that evening.

Leonard Rossiter avoided Hylda – there was no sign of him at the lunch table.

I found out that he’d been in a panto of Robinson Crusoe with Hylda. Leonard was Man Friday. There was one scene ending that they hadn’t sorted out. One night, in a fit of desperate improvisation, Leonard said, ‘Oompah, oompah,’ and the Brothers Four, who were on stage with him, said, ‘Stick it up your joompah.’

When they came to the stage door the next night, on the noticeboard it said, ‘When Man Friday says, “Oompah, oompah,” Hylda Baker will say, “Stick it up your joompah.” ’

In other words, Hylda was stealing the laughs.

Harry Secombe kept his own company. He had a coterie of retired gentlemen, asking things like ‘Glass of water, Harry?’

They were like Harry, brimming with good nature. He’d become a keen photographer. I wondered if he had been influenced by Peter Sellers, the camera-mad Goon. He took the photo of me with Leonard Rossiter that appears in this article. It’s never been published before.

Hylda was put out that Harry had a canvas chair with his name printed in large black lettering and she didn’t. She let it be known that she should have such a chair. So they cobbled together a canvas chair with a large strip of pink bandage, on which ‘Hylda Baker’ had been scribbled with a Biro. It looked like something a child had made, but she accepted it.

They had a publicity department on set. One day, Carol Reed, the director, was talking to Jeremy Thorpe, who was wearing his familiar velvet-coloured coat. The flashbulbs flashed as they talked. I heard Thorpe say that when he worked in films, the floors were made of rubber.

Suddenly Hylda elbowed her way between them and struck pantomime poses of listening intently, first to one, then to the other, like a child pretending to be enthralled. Then I saw, across her back, the jumbo strip of Elastoplast. It had become twisted up and attached itself to her costume, with ‘Hylda Blaker’ scrawled in Biro, there for all to see.

Not long ago, they showed the original cut of Oliver! on the biggest screen at the NFT. Mark Lester (who played Oliver), Ron Moody (Fagin) and I did a Q&A.

Mark Lester has turned out to be an elegant, charming, professional man. I knew him at the age of nine, along with another seven stand-in Olivers, all dressed identically – one of a tribe; all little Olivers. He was very pleasant.

At the screening, I was shocked to see what a monumental piece of creative cinema the film is. What most people know is a cut down version, re-edited for television. It has a vastness and power that have been neglected.

What I’m famous for in Oliver!, though, is my run in the snow, fetching Bumble. I fall on my arse and bounce up again, to musical accompaniment. I couldn’t do it now!