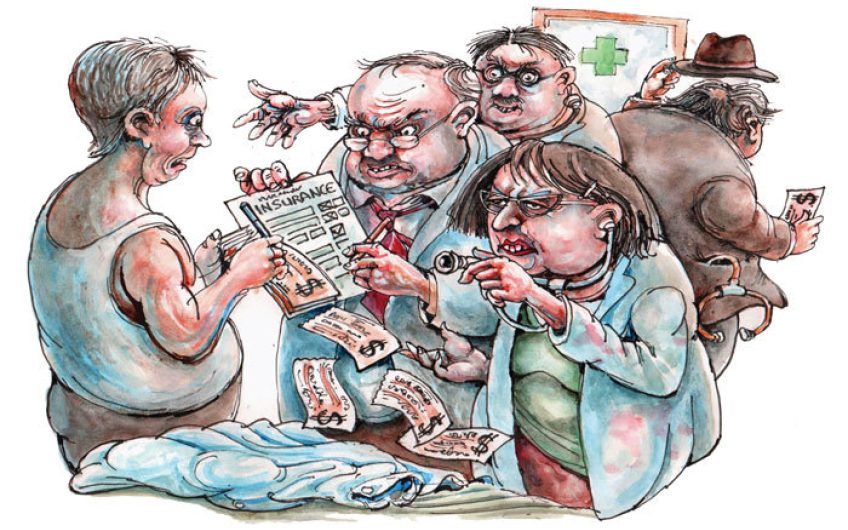 My first visit to a US doctor’s office, in the late summer of 2001, was like one of those unfunny Radio 4 sitcoms. My American wife and I had moved from London to Rhode Island and in order to complete my application for permanent resident’s status I needed a clean bill of health.

The physician to whom I was referred, a Hispanic gentleman with an uncertain command of English, ran his stethoscope over me, asked a number of rudimentary questions and ticked a series of boxes. It took me longer to pay the $500 fee and complete the paperwork than it did for him to pronounce me fit for purpose.

Some weeks later, the immigration service informed me that the ‘doctor’ who had examined me was in fact a fraudster, who had since been arrested. I must now visit another practice and pay out a second $500. My protest, that I was being charged for their mistake, went unheeded. It was apparently up to me to ensure that the quack they sent me to was the genuine article.

Physician number two was a busy man, who delegated a nurse to draw my blood and carry out other basic checks. One of the tests was for tuberculosis. She applied a patch to my arm and told me to report back three days later. When I did so, I was told that I had TB and faced an uncertain future, ending, quite possibly, in my premature death.

Alarmed, I asked the doctor what happened now. Well, he said, for a start I would probably be returned to the UK, as the United States did not permit immigrants with a notifiable disease to remain in the country. In the meantime, he said, I would have to undergo an extensive – and expensive – series of tests.

Only after these tests showed me to be healthy and well did the doctor reveal the truth behind the mistaken diagnosis. Apparently the nurse had measured the swelling beneath my TB patch with an inch ruler, not a metric gauge, thus getting its extent wildly wrong.

Time passed and I moved to New York, where my wife had found work as a college lecturer. Having obtained insurance through her employer, I registered with a practice in Brooklyn and arranged for a check-up.

The doctor, thick-set and evasive, ordered the inevitable blood work, unhooked his stethoscope and went through a brief list of questions. More boxes were ticked. It didn’t take long. On the way out I remarked that my heel was sore. ‘Stand up against that wall,’ he instructed, ‘and raise your foot.’ I did so. ‘You need to walk more,’ he said, twisting my foot around, ‘and take anti-inflammatories if it doesn’t improve.’

A month later, I got the bill. The insurance company paid for the check-up (the results of which I never discovered), but the $250 for my ‘podiatric examination’ was down to me. Outraged, I hobbled straight back to the surgery, only to find that the doc had scarpered, ahead of his creditors, and the practice had closed.

Up to this point, aged 54, I had at least been in reasonable shape. But two events now conspired against me. On holiday in France, I was run off the road by a pair of ageing boy racers, neither of whom stopped. My heart started thumping and my hands shook. I visited the local doctor, who told me I was suffering from atrial fibrillation, a condition in which the heart goes berserk, probably due to shock. Next day, I was admitted to hospital in Rennes, where, after extensive tests, I was given electro-cardioversion (a process a bit like ironing) by one of France’s top heart specialists and presented with a bill for 2,500 euros. ‘Your American insurer will pay for this,’ I was told.

Yeah, right. Back in New York, I went to my latest doctor seeking a review of my condition. I was referred to a nearby cardiologist, who arranged a series of stress tests, including one described, somewhat disturbingly, as ‘nuclear’. On the due day, I turned up and was worked over by an elderly technician from Kazakhstan, who scanned my chest before covering me with electrodes and despatching me across the hall for my atomic experience.

After a long wait, a burly doctor, who looked like an angry Ernest Borgnine, came in. He prodded my chart instead of my chest. ‘Your insurance company has rejected the nuclear test,’ he said. ‘This has been a complete waste of my time.’ Then he stomped off, scowling, leaving me sitting there until I was rescued by the babushka, who told me to get dressed. Back in reception, I explained what had happened. ‘We’ll be in touch,’ the receptionist said. They never were. But the bill came to $2,000, some two thirds of which, after a lengthy correspondence, was reluctantly paid by my insurer.

The following year, I came down with gout. I thought I would pass out or die, whichever was the less agonising. My physician was unsympathetic. She didn’t even look at my feet. All she wanted to discuss was my heart and why I hadn’t completed the scheduled tests. I explained.

‘Oh that! Try drinking less and change your diet.’

The last time I sought medical help in America was in the spring of 2012, when, again through my wife, I at last had pretty decent cover. The doctor in this case was a pleasant and efficient African-American woman, who prodded and poked at me for an hour or so before arranging for me to have the inevitable blood work done. Sadly, not long after, my wife changed jobs and my insurance ran out, so I was unable to keep my follow-up appointments, which would have set me back some $2,000.

Eventually, under spousal pressure, I organised a package that, while costing me a modest $200 a month, obliged me to pay $250 up front every time I went to the doctor’s. But even this didn’t work out. The cheque I made out went inexplicably astray (though the money certainly left my bank account), so that I was legally in default. The broker who rang to explain this told me that I should send a second cheque to cover not only the period remaining but the three months already expired. But would my insurer have paid the bills for anything that had happened to me during the missing quarter? I inquired. Er, no, came the sheepish reply.

Unfortunately, when I rang the number provided it was out of service. My second attempt resulted in my being put through to a perinatal clinic. On the third and last occasion, a regulation recorded voice informed me that there was no one available to help me at this time. ‘Please try later.’

President Obama has apologised for the shambles of his healthcare roll-out – effortlessly achieved in spite of the fact that the Administration had three years in which to perfect the necessary software. No doubt, Republicans permitting, the situation will improve and I will end up with something. Or not. The trouble is, I’m almost past caring.

But here, as we say in America, is the kicker. I turned 65 last September and should by rights be covered by Medicare, the federal scheme aimed at ensuring basic healthcare for the elderly. Alas, it transpires that though I have been paying in since 2001, I will not be eligible until I have a total of 40 ‘credits’. At present I have 28 and cannot expect to benefit until I hit 70. In that case, I told the official passing on this melancholy news, I wish to request a rebate of my twelve years worth of contributions so that I can organise my own private health insurance.

‘A rebate?’ he echoed, his voice rising, as if I were Oliver Twist asking for more.