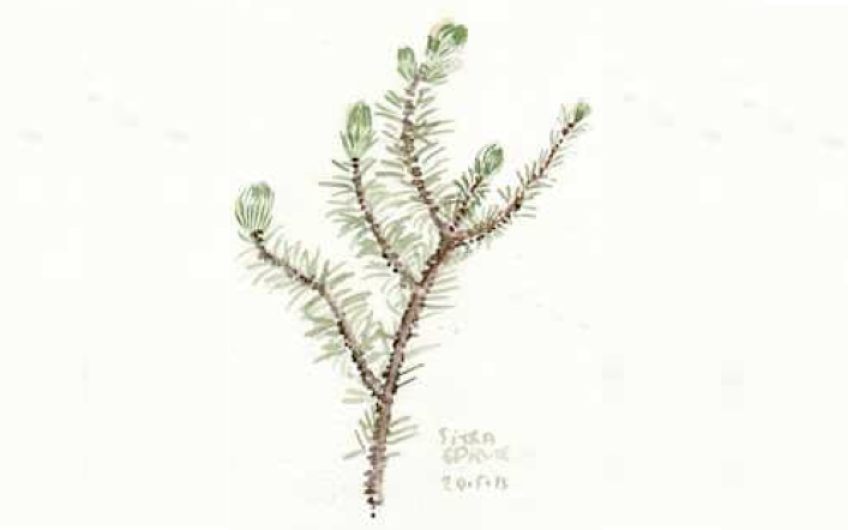 Keep a lookout for the bright green tassel-like growth that appears on all needle-bearing trees of the species Pinus as soon as the days begin to lengthen. They can be a culinary ingredient – a way to add flavour and fragrance. While all are species are edible, the young needles of a Douglas fir, Pseudotsuga menziesii, deliver particularly delicious aromas of apple and honey.

To candy young pine needles, simmer in a strong sugar syrup till the sugar begins to crystallise, then drain and leave to dry in a warm place. To prepare pine-needle-infused syrup as a sauce for ice cream or panna cotta, reheat with a pinch of cornflour slaked in a little lemon juice and stir till it thickens a little.

For a pine-needle flavouring oil (good with fish or on a potato salad), pack freshly gathered needles in a bottle, add grapeseed or sunflower oil, and leave it to take the flavour overnight.

For a medicinal tea high in vitamins A and C, prepare an infusion of pine needles and sweeten with honey. The Scandinavians used pine needles as a flavouring herb in winter, while the inner bark of the tree was milled to make flour for flatbreads when the oats and barley ran out.

For the original Norwegian gravlax – ‘buried’ salmon – marinate salmon fillets in the usual way with salt, a pinch of sugar and dill fronds, but replace the last ingredient with pine needles – a process that mirrors the traditional method of preserving salmon caught in Arctic waters before the winter freeze by burying the catch on the seashore in a pit lined with pine branches. The pine needles, along with the natural salt in the sand, allowed the flesh to remain palatable in much the same way as salt-pickled herring, ready for the fishermen’s return the following spring.