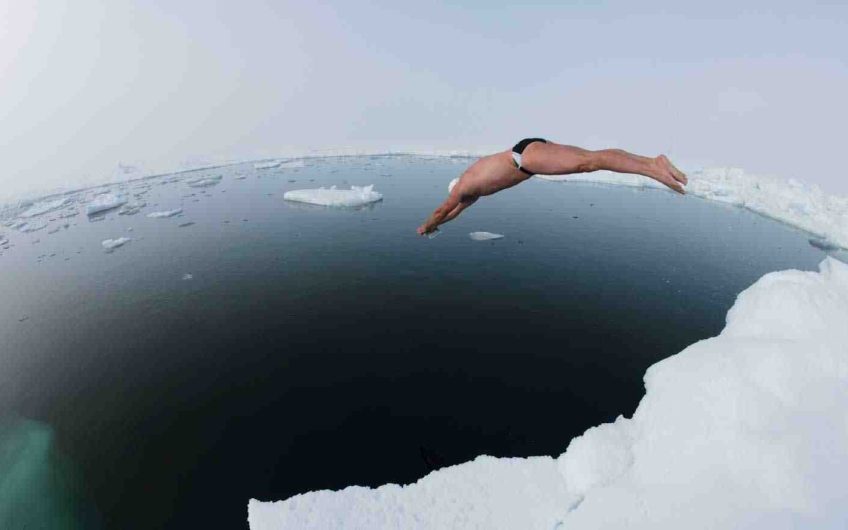 Diving at the North Pole
View Full Size
1
of 1

Lewis Pugh, the first person to swim across the North Pole, admires a new Arctic exhibition at the British Museum

No one had ever swum in water that cold before. No wonder that, when I was standing on the edge of the ice in just my Speedo trunks, my swimming cap and goggles, I was scared.

With my extreme swims, I go through five stages: fear, regret, pain, desperation and relief.

I’ve swum in the Antarctic, too, and in a glacial lake on Mount Everest, as well as swimming the length of the Thames and, two years ago, the 328-mile length of the English Channel.

But the Arctic, which stars in a new British Museum exhibition, is particularly daunting. The water is completely black – the Russians call it the Black Ocean. It’s so black that when you take a stroke, you can barely see your hand when it’s fully stretched out.

When I dived into the icy waters of the North Pole to swim a kilometre, there was instantaneous regret. The moment you hit freezing water, your blood rushes straight to your core to protect your vital organs – brain, heart and lungs. So your arms and legs get extremely cold. As I started swimming, it was very difficult to breathe and I gasped for air. I counted strokes to focus on something.

Regret can move very quickly into an extreme pain that ratchets up and up, particularly in your fingers and toes.

Then, after about 15 minutes, it gets to the stage where you’re really desperate. Even when I got out, the pain wasn’t over. The relatively warm blood in my core now rushed to the extremities to warm them up. Blood went from my heart to my frozen muscles in my arms and legs and it then went back, ice-cold, to my heart. So my body temperature was dropping long after I got out of the water.

Only after 50 minutes in a hot shower do you get to the final stage: exhausted relief.

When I swam in Antarctica, it was even worse. The water in the Ross Sea was the same temperature, –1.7°C, but the outside air was –37°C (compared with 0°C at the North Pole). The wind blasted over the top of the ice shelf ahead of me – it looked like the White Cliffs of Dover – straight on to the water I was about to swim through. I remember looking out of the cabin porthole before my swim and seeing my wife, Antoinette. A wave smacked her boat, turned into slush mid-air and hit her.

When I was swimming, I was pulling my arms out of the water into –37°C air, and it felt deathly. After the first minute, the tips of my fingers were solid white. After the fifth minute, my whole hand was solid white. That’s the only swim I’ve pulled out of. After five minutes, the pain was too great.

If I didn’t do all my preparation, and acclimatise for the swims, I’d die – as would all humans; you would go into shock, gasp for air and drown.

As well as the cold, you’ve got to think about animals. In the Arctic, polar bears are a worry. When I was training in Svalbard, the Norwegian archipelago in the Arctic, I was legally obliged to carry a rifle. I’d leave it on the beach, and swim up and down in short lengths – so I was never far from my weapon.

In Antarctica, you never forget the first time you hear a leopard seal: there’s a guttural sound as it opens its mouth like a Komodo dragon to reveal razor-sharp teeth. One moment, they will kill a penguin and rip it apart in front of you – and offer it to you as a gift. The next moment, it can grab your leg. These animals have a split personality! A scientist from the British Antarctic Survey tragically drowned after being dragged down by a leopard seal.

While swimming, you’re overwhelmed by the varied beauty of the Arctic. Take Spitsbergen (‘spiky mountains’) – it’s one of the most magnificent, dramatic places on the planet.

In the Northwest Passage, at Lancaster Sound, I was struck by the massive fjords. In the west, it’s very flat.

There’s the beauty of the sea: in Antarctica, the water is so turquoise that it looks like the Bahamas. You’d only know the difference because there are penguins darting among the icebergs.

And then there’s the sky. In summer, there’s 24 hours of sunlight. In winter, it’s complete darkness, with a bit of twilight, the moon and the polar lights.

I love working with the indigenous populations of the Arctic, who feature in the British Museum exhibition – the Inuit, the Sami and the Chukchi. After nearly 30,000 years in the Arctic, they’re so well adapted to their environment.

One Inuit boat-driver in the Northwest Passage looked worried as I swam past an iceberg. He told me his friend had once caught a Greenland shark and inside it discovered a polar bear – I was easy pickings by comparison. On another occasion, his brother had died falling through sea ice.

Given all these dangers, why don’t I wear a wetsuit or a drysuit?

The rules on long-distance swimming outfits have remained much the same since Captain Matthew Webb swam across the Channel in 1875. And if I wore a wetsuit or a drysuit, that wouldn’t convey the right message. As UN Patron of the Oceans, I’m urging world leaders to dive in, be courageous and deal with the climate emergency.

In the years I’ve been swimming in the Arctic, there have already been dramatic changes. When I did my first swim in the High Arctic, in Spitsbergen, in summer 2005, the seawater was 3°C. In 2017, in the same place at the same time, it was 10°C. In about 12 years, experts say, the Arctic will be largely free of sea ice in the summer months.

The glaciers are melting, too. In 2005, I swam by the mighty Magdalenefjord glacier in Spitsbergen. I returned in 2017 and said to the captain, ‘You’ve sailed up the wrong fjord – this isn’t it.’ I was wrong – the glacier was unrecognisable because it had retreated so far.

Greenland is experiencing some of the fastest melting in the world. In some places, the ice sheet is three kilometres deep. If that all melts, there’ll be a seven-metre rise in sea levels. In Siberia, wildfires broke out last year, from burning methane in the melting tundra. People thought the rain and snow of winter would put out the fires. They didn’t.

Protecting the environment is the defining issue of our generation. I want our leaders to witness the changes first-hand. And then to address it urgently at the United Nations Climate Change Conference in Glasgow next year.

You may think I’m crazy swimming in sub-zero waters. But if you see what I’ve seen, I’m sure I am the normal one – it’s our leaders who are crazy for not taking immediate action.