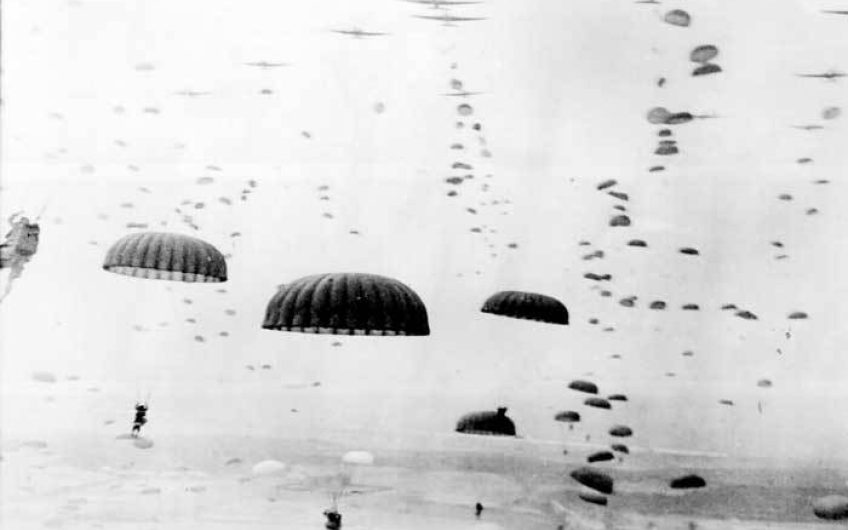 Parachutes open overhead as waves of paratroops land in Holland during operations by the 1st Allied Airborne Army. September 1944
View Full Size
1
of 1

Barry Cryer, compère extraordinaire, was in fine fettle, gracing us with not one but two parrot-themed jokes before announcing our speakers.

First to speak was Sir Tim Waterstone. His book, The Face Pressed Against a Window: A Memoir, traces the story of the Waterstone’s chain.

Opening his first store in 1981, he had an ambitious aim: to be the biggest bookselling group in Europe in 10 years. It was a rocky start. His first meetings with bank managers, when he was trying to raise funds, did not go well. At the first, he was asked to make 15 copies of his proposal. Full of enthusiasm, Sir Tim bounded down the street to make some copies. A few days later he discovered that the copies were distributed at a business seminar that afternoon as the perfect example of a company that you shouldn’t lend to. Many years later, Waterstone tracked this man down and sent him cuttings of press coverage of Waterstone’s success. He received a four-word reply, ‘win some, lose some’.

The second bank manager, having heard his plan, said to him, ‘Mr Waterwell, I can’t tell whether you’re a genius or a madman,’ but as he was retiring the following week, he lent Waterstone the money anyway.

Finally, Waterstone gave a charming account of his love of books. He was a late bloomer and struggled to read until quite late. His favourite thing to do, when he was young, was sit on his bench at his local bookshop and read, aided by the charming owner.

Waterstone then explained where he had got the idea for his chain from: the literary knowledge of the independent bookshop with the stock of the university bookshop. With this model he went from strength to strength, achieving his original aim by 1992. It wasn’t all a basket of roses. He did get bad coverage every now and again. In 1992 a particularly critical journalist described him as ‘a lock keeper on a deserted canal’. His response? She was ‘no oil painting’.

Anna Pasternak spoke next. Her book Untitled: The Real Wallis Simpson gives one of only a few positive impressions of the Duchess of Windsor.

She noted with some caution that the last person to speak about Wallis Simpson had a stroke on the first attempt. A reference to Andrew Morton, now well, who was taken ill at our May lunch last year.

It is often assumed that Simpson was the principal reason for the establishment’s dislike of Edward VIII. Not so. As early as 1927, five years before Wallis met Edward VIII, Sir Alan ‘Tommy’ Lascelles had said to Stanley Baldwin ‘the best thing that would happen would be that the Prince of Wales break his neck’. Stanley Baldwin agreed.

A great fan of Simpson, Pasternak was completely overwhelmed by how Wallis’s inner circle opened her doors to her. The image of the cold, steely schemer could not be further from the truth. She described the misery of the abdication, the thousands of letters of hatred that she would receive, prompting her to remark on how Simpson’s ‘world fell to pieces on her breakfast tray’.

On the Duke of Windsor’s death, Simpson was asked, ‘Left, or right?’. Which side of the Duke would she like to be on. She chose the left, beneath a plain tree so that the leaves could fall on resting place. As ‘no one will lay flowers on my grave’, she said.

Last to speak was Sir Antony Beevor. His subject was Arnhem: The Battle for the Bridges, 1944.

Beevor explained that Monty, annoyed by his loss of overall command of British ground forces in Europe to Eisenhower, wanted to jump ahead to Arnhem to get ahead of the Americans.

Through a combination of Monty’s ego and General ‘Boy’ Browning’s desire to command, many serious logistical challenges were overlooked. Concerns, though raised by the Americans, were completely ignored.

One of the worst outcomes of the battle was the treatment of the Poles. General Sosabowski, the commander of the Polish forces, had warned of the quick response of the Germans to no avail. Monty even laid blame for the mission’s failure at Sosabowski’s door.

Oddest of all was Monty’s determination to view the mission as a success. As they got 90 per cent of the way to Arnhem implied 90 per cent success. The Air Chief Marshall said in response that ‘you can jump of a cliff with even more chance of survival, except for the last few inches.’

Much the same, Prince Erhard of the Netherlands said that the Dutch couldn’t survive another of ‘Monty’s successes’.

On the topic of the Dutch, Beevor mentioned the undervalued role of the Dutch in the battle. Railway workers struck to slow German reinforcements, they dragged wounded soldiers into their homes and many were executed by the Germans in retaliation. More than that they punished the Dutch for their support of the allies, depriving cities such as Rotterdam, Amsterdam and The Hague of food supplies. Something which has proved a continuing point of tension between Germany and the Netherlands to this day.

As usual, our fabulous lunches are facilitated by the sponsorship of the fabulous Noble Caledonia and the ever reliable Simpson’s team.