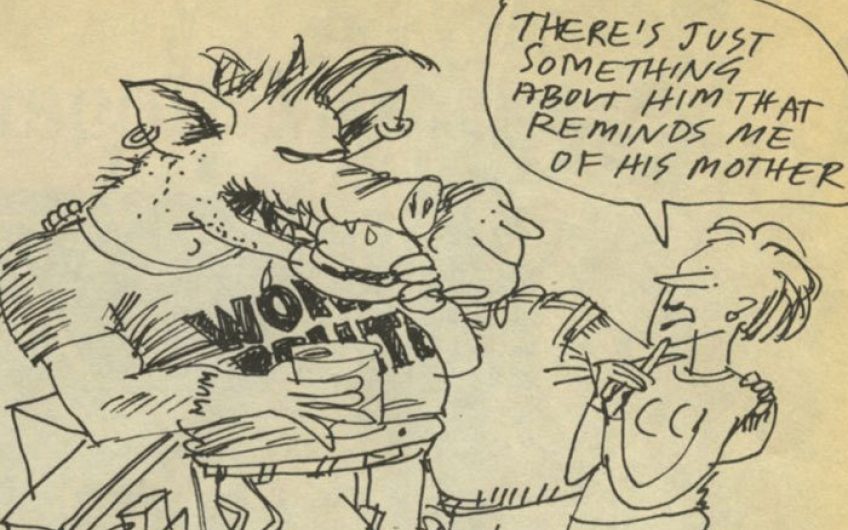 YOU MAY KNOW the scene. Teenager in muddy trainers clomps over clean floor, burgles fridge as if it were his right. Always hungry, he’s not keen on organized meals at anything so pedestrian as a table. ‘Grazing’ is the way he likes to eat, no matter the inconvenience for your household. One knife used with reckless economy for everything. Milk intended for tonight’s pudding sloshed down in a single, selfish gulp. Snacking over for an hour or so, it’s time for a little action. Drum practice, perhaps. And never so much as a by your leave.

But the worst thing about this charmless lout is that he happens to be the son of your second husband. He is the offspring of the first wife whose rules of upbringing do not tally with your own. To you, he is a living reflection of the first wife’s failings. You can understand why your beloved got rid of her. (You can understand why, sometimes, your beloved would willingly abandon this son too - but that is against the rules.)

Children must be accommodated into the whole messy business of second marriages. They become step-children

whether they like it or not. And they are to be pitied. With few exceptions, the experience of being a step-child is almost always deeply unsatisfactory. To add to this hardship, step-children know that even when their behaviour is perfect they are still resented. For step-parents are creatures with hackles automatically raised as they enter one of the uneasiest roles cast by society.

Familiarity with the problems does nothing to help with their solution. Resentment, jealousy and suspicion flourish on both sides, while feelings of unfairness, regret and irritation sear the household. No wonder the percentage of failures in second marriages is so often due to difficulties with inherited children.

I was briefly a step-parent myself, and was no good at it. Aged 22, I wanted my husband to myself, divorced entirely from

the past. But his children meant that link could never be severed. Aged two and four, they were as endearing as any two children you could hope to find, made no fuss about a new woman in their father’s life and were very little trouble. But they required some effort: once a week they would expect games, the zoo, beastly iced biscuits for tea. I was not (and still am not) a natural child-lover and was not ready for such things. Their very presence was annoying, what’s more they looked like their mother. In their innocence, they reminded. I hated that, and I hated myself for such ignoble feelings.

Such selfishness is appalling but to a

certain extent understandable. For it’s hard to imagine before marriage to someone with children just how difficult life will become. Everyone realizes that children must have access to the parent they are not living with, but how disrupting will that be? And if the children live with you, how should they behave? As their parents saw fit when they were together, or as the new partnership decrees? ‘I know Mama didn’t mind you borrowing her jerseys, but Cynthia isn’t your mother so you must ask first.’

So do you insist on your own standards, or sacrifice them for the sake of peace? ‘Well, if your mother doesn’t object to you and Larry spending Sunday in bed making all that noise over the kitchen, then there’s nothing I can say...’ Even with all the lessons accrued from step-parenting friends and mellowed by middle-aged understanding, I’m glad I’m not a step-parent today. I’ve seen the suffering of so many people, including those equipped with the very best intentions, as they encounter unforeseen disasters. One friend of mine inherited an exceptionally dead-battery of a step-son. She tried hard. She cleared up the sick on the stairs after a drunken evening without complaint. She suggested all manner of things to entertain him, played tennis with him, fed his rude and greedy friends. But she could not win him over. Finally, he confessed the trouble to me. His stepmother would never let him have a moment alone with his father. She was always there, guarding her rights. ‘She even came to my grandmother’s funeral,’ the teenager spat, ‘my mother’s mother and nothing to do with her. I thought that at least at the graveside I could have had Dad to myself . ..’ This problem had not occurred to his father and stepmother.

Another friend inherited a ‘difficult’ step-daughter. (Even ‘easy’ children turn difficult when subjected to step-parents.) My friend made every effort but was rewarded with increasing hostility and, again, the cause was one that she had failed to foresee. ‘My mother always filled the house with flowers from the garden,’ the child wailed. ‘This stupid, lazy old bag claims she’s only got time for paper ones. Even in my parents’ bedroom! I can’t bear it.’

Children who live in the old marital house cause problems that are almost unavoidable. Children hate change and the new step-parent is not unnaturally keen to cast her own stamp upon a place that was fashioned by her predecessor. Hence a combustible impasse.

There’s no point in pretending that the inherent problems of step-parents and children are not dire and often fatal. Even when a child is happy that one of their parents marries again (children suffer more than is realized from a feeling of responsibility for single parents), these feelings are clouded by hostility.

Perhaps the wisest course in contemplating a marriage that will turn you into a step-parent is to be ruthless in examination of yourself in that role. I have a friend who loves her future husband’s two teenage boys very much, but she knows she could never live with them. So the marriage will not take place till the boys have left home. When they visit she will welcome them - exercising tolerance over their eating habits, smiling at the heavy metal. But the luxury will be knowing they are visiting and that permanent presence, with all its problems, will never be a threat. Where hastier marriage is impossible to avoid, then you can only gird yourself with courage, patience, tact and strength, lock the fridge and hope for the best.