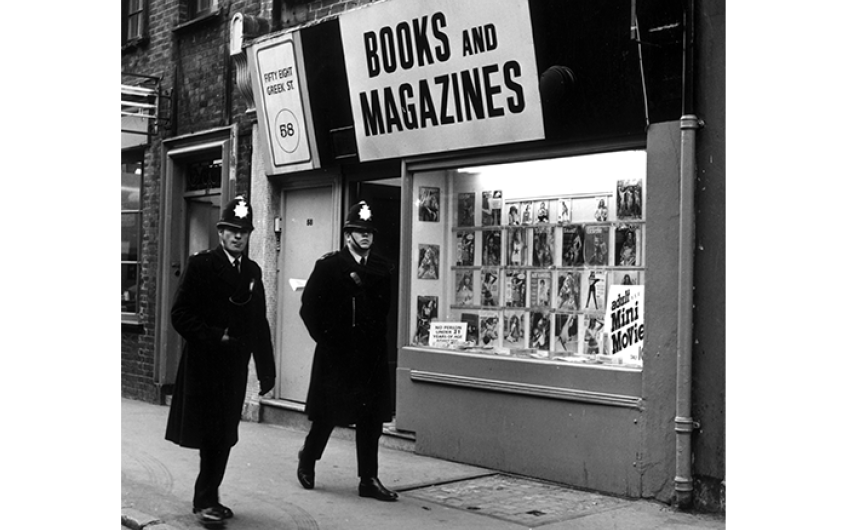 Commander Ken Drury, the head of the Flying Squad, had been putting on weight. All those lunches at the Caprice, all those dinners at the Savoy, all those tempting gateau trolleys. And all paid for by Britain’s leading pornographer, the dapper and urbane Jimmy Humphreys. What to be done? Humphreys to the rescue, this time with the gift of a rowing machine and an exercise bicycle to get the commander fit enough to pick up those fat weekly bribes he was receiving for turning a blind eye to all the illegal smut of Soho.

This was London in the late Sixties and early Seventies, when bent police officers were in their pomp. In those days, the corrupt copper felt entitled to all the dancing girls and used fivers that the criminal world could throw at him, in contrast to today’s much more secretive and – let’s be fair – very much rarer forms of police dishonesty uncovered in the wake of the Murdoch empire’s phone-hacking scandal.

Soon he was made aware by detectives that, if he wanted to continue in business, he would have to buy them ‘a drink’ on a regular basis: ‘a drink’ being anything from a tenner to, in the case of senior officers, a couple of grand a month – plus a Christmas bonus. In this, Humphreys had learned the ropes from his mentor, Bernie Silver, a previous ‘emperor of Soho’, who had made a fortune from brothels and strip joints. He taught Humphreys the golden rule with detectives: ‘get ’em young’, then you could rely on them as they moved up the promotion ladder.

Humphreys, who died a few years ago, used to recall how he would have to take detectives and their wives for meals at the Ritz or Savoy and pick up the bill. Sometimes the wives expected a little something, too. On one occasion, a detective returned the gift of a necklace – not because of a guilty conscience, but because his wife’s neck was too thick for it and he wanted a larger one. If the police were about to raid one of their bookshops, Humphreys would receive a phone call the night before with the advice ‘Be like W H Smith’ – i.e. get rid of all but a couple of porn books.

Commander Drury even felt relaxed enough to take a holiday in Cyprus with Jimmy and Rusty, something that even the most cocky of bent officers would never consider today. Alas for Drury, the Sunday People was on to his case by then and he found himself on a slippery slope that ended with a dawn raid, a blanket-over-the-head arrest, an Old Bailey trial and jail for eight years in 1977. He was perhaps the most blatant example of how corrupt the detective side of Scotland Yard had become, but lots of them were at it.

Detective chief superintendent Bill Moody was the head of the Obscene Publications Squad, or ‘the Dirty Squad’ as it was presciently known at the time. He drove a Lancia and was on the payroll of both the Met and Humphreys. Moody – whose nickname was ‘Wicked Bill’ – and his superior, the debonair Commander Wally Virgo, one of the top detectives at the Yard, pocketed £53,000 between them in the course of sixteen months. No small sum in the early Seventies. Humphreys, like the private detective Glenn Mulcaire (the chap at the centre of the current phone-hacking scandal) kept meticulous notes of his transactions and, when he was arrested on another matter, handed them all over to the anti-corruption police. Virgo and Moody were jailed for twelve years each, although Virgo was released on appeal and died a few years later. The straight-arrow officer leading the operation against corruption, assistant commissioner Gilbert Kelland, wrote later: ‘The crow of corruption had to be nailed to the bar door.’ Indeed.

Peter Scott, once Britain’s most prolific cat-burglar and the subject of the 1965 film He Who Rides a Tiger, (Tom Bell played him, Judi Dench his girlfriend, Charles Crichton directed) knew Wally Virgo well. Scott now lives in a council flat in King’s Cross, the proceeds from the odd Vermeer and Sophia Loren’s diamonds long gone. He remembers Virgo and has his own theories as to why corruption was so rife then.

‘Poor Wally,’ he says. ‘He was basically a straight-hand but when he saw that everyone else was in the pot, greed got the better of him. I felt a bit sorry for him. In those days the wages for the police weren’t that good and there was no fat pension to look forward to like there is now, so for someone like Wally to get £500 a month or whatever it was – it was just too tempting. I saw him after he was convicted. He couldn’t look me in the eye – he’d reduced himself to my level.’

Vice was not the only area to attract corrupt officers. In 1972, after a Sunday Times exposé, three corrupt members of the drugs squad found themselves in the dock in front of Mr Justice Melford Stevenson, who sent them down and delivered a famous sentencing speech: ‘You poisoned the wells of criminal justice and set about it deliberately. What is equally bad is that you have betrayed your comrades in the Metropolitan police force which enjoys the respect of the civilised world – what remains of it – and not the least grave aspect of what you have done is provide material for the crooks, cranks and do-gooders who unite to attack the police whenever the opportunity arises.’

Not that corruption was confined to drugs and vice. One busy bank robber, Bobby King, who went on to take an Open University degree in prison and become an expert on the work of Virginia Woolf, described to me years ago what a simple world it was in the seventies. ‘I can’t remember one local CID who wasn’t crooked,’ he said, explaining how every problem could be sorted by a bribe, from driving while disqualified (£25) to assaulting a policeman, possession of a firearm, assaulting the police (£2000, which included the officer explaining his own injuries to a magistrate – ‘I could have fell in the scuffle’). The etiquette was that, on being arrested, the criminal would ask the detective if ‘something could be done’.

Charlie Richardson, the gangster who ended up getting 25 years at the Old Bailey for violence, fraud and extortion in 1967, said in his autobiography, My Manor, that ‘the most lucrative, powerful and extensive protection racket ever to exist was administered by the Metropolitan police. It was a sort of taxation on crime... sometimes we would pay people to be “found” committing small crimes so that our friendly local protection racketeer in blue could have someone to arrest and look like he had been busy.’

There were, of course, some white knights in this sorry affair. Sir Robert Mark, the Met commissioner who eventually cleaned up the Yard, described the CID over which he took charge as ‘the most routinely corrupt organisation in London’. He initially encountered enormous resistance in his efforts to purge it and is remembered for his pithy aperçu that ‘a good police force arrests more criminals than it employs’. During his commissionership, fifty officers were prosecuted and 478 left early.

Of course, there has been corruption before and since. The old music-hall song ‘If You Want to Know the Time, Ask a Policeman’ was based on a belief prevalent at the time that officers stole the watches off drunken toffs. Anyone in a position of power over others can be tempted by easy pickings, and dishonest cops, like dishonest politicians – and, God forbid, dishonest journalists – will be forever with us. But the days of rowing machines, hols with pornographers and of such routine untouchability have subsided, like one of Ken Drury’s soufflés.