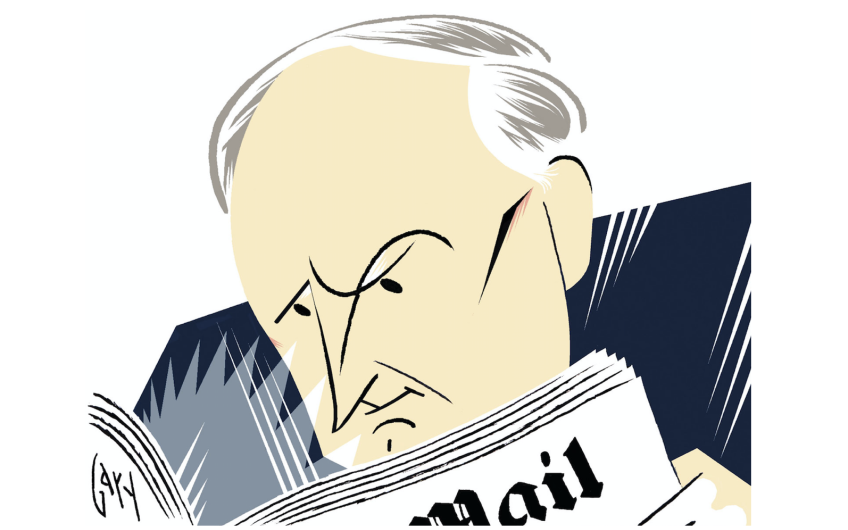 Paul Dacre doesn’t do interviews. I know of just three in the  25 years of his editorship of the Daily Mail. When the Mail is required to argue its case on TV, a loyal deputy is served up to take the heat. Dacre insists that the paper speaks for itself, and so it does.

His complete authority rests on his distinctive and energetic professionalism, and Brexit presents him with a dramatic climax to a remarkable career. He is now 69, and has had heart trouble. Like him or not, and there are plenty in Westminster who don’t, he is Britain’s most formidable newspaperman. And its most relentless.

You learn about Dacre in fragments from colleagues, who insist on anonymity: no names, they say, no pack drill. All are struck by his energy. He is in the office in Kensington at the start of the day, and usually stays until the last page has gone at 10.30pm. There is an entrenched belief in the trade that, within those long hours, he conducts a reign of terror.

True, he does shout when he thinks that reporters and sub-editors are not concentrating, and he randomly refers to them as ‘c**ts’ (his conferences are known as the ‘vagina monologues’). ‘It’s theatrical,’ says a colleague; ‘he loses control when he feels like losing control.’ But they get used to it, and Dacre rewards loyalty and hard work with decent pay and job security. His justification is that shouting creates energy, and energy creates great headlines.

One of the most memorable appeared on 4th November 2016. The Daily Mail’s front page pictured three plump, bewigged High Court judges over a big bold headline: ‘Enemies of the People’; and added for good measure: ‘out of touch judges who defied 17.4m Brexit voters and could trigger a constitutional crisis’.

Dacre was with the group of sub-editors on the paper’s backbench, searching for the most damning headline for the Court of Appeal judges’ decision that Parliament ought to have a say about the terms of Brexit: ‘Enemies’ was agreed as a good start, but of what? Brexit? Justice? Not strong enough. What about ‘the People’ then? That was tough.

Dacre, who delights in provocative headlines, let it go to press. When the controversy over ‘Enemies of the People’ exploded, colleagues sensed that even he was wondering whether it might have been over the top, but it was true to the Mail’s paranoia which had already made an appearance in a leading article on  13th October in which Remainers were categorised as creatures of the political establishments of London and Brussels, which plot ‘to subvert the will of the British people’.

A significant player in this story  is Paul Dacre’s father, Peter.  A Yorkshireman, he joined the Sunday Express in its halcyon days, writing the gossip column as Ephraim Hardcastle; travelling to New York as an Express correspondent; getting to know Lord Beaverbrook himself. Peter Dacre bought his work home, and the dinner-table talk was a school of journalism, especially for Paul, who later claimed that he had wanted to be a newspaper editor from the day he was born. Children of journalists learn about the language, characters, and heroics of the trade, and if they respond, and follow their father (or mother), they already have a sense of the romance and obligations of journalism. (I know this because it happened to me.)

Having worked as a copy boy on the Daily Express, he returned to it after graduating from Leeds University, where he studied English and edited the student newspaper. In his late twenties he was sent by the Express to New York. A conventional student Lefty at Leeds, he was soon converted to the allure of the free market. In contrast, he now saw Britain as an ossified, statist society, dominated by inefficient, state-run industries and corrupt Labour councillors.

Returning to London, he was poached by the Mail, and let loose on its evening paper, the Evening Standard, before being elevated to the editorship. There is no computer on his desk at the Mail, where he rewrites copy and alters headlines; he also selects the candidate for the main feature, and only rarely is there any deviation from the policies and prejudices of Paul Dacre. He makes wry comments about modern culture, and rude remarks about politicians, such as Peter Mandelson, and those handing out foreign aid. And he hates the state-sponsored BBC. If you are someone like Philip Green, and the Mail decides to monster you, it will get you. It is generally slow to make corrections, but quick to argue fiercely for a press free of a hint of government control.

He may be the last of the old school of Fleet Street editors (‘before they start getting the money men in’, as they say in the newsroom). The paper makes money for Lord Rothermere, the proprietor; so money men are not required – yet. It makes money for Dacre, too. His salary is over £2m, including bonuses. His estates in Sussex and Scotland have received a useful £460,000 in EU agricultural subsidies since 2011, but he will get by if Brexit should end them. Rothermere’s best gift to him is a free hand, as Dacre acknowledged in last night's resignation statement. Because he knew that Rupert Murdoch would not do the same, Dacre turned down an offer of the editorship of the Times.

Twice in 2016, Dacre won a stunning jackpot; seventy per cent of his readers helped forge a small majority for Brexit, which lent legitimacy to his campaigns against the iniquities of the EU. With Brexit came Theresa May. Dacre did not jump on that bandwagon, so much as drive it. He saw many of the virtues of Arnos Grove in the steady middle-class conservatism of her campaign, and judged her capable of delivering the hard exit he demands.

He is a monarchist, and a moralist, happy to distinguish right from wrong. He thinks the Iraq War was wrong, and torture, too. Individualism is right, and collectivism wrong. Anthony Barnett, from the impeccably liberal Open Democracy lobby, suggests that Dacre is a believer in Late Great British nationalism. He calls this the newest of ‘isms’ – Dacreism. It asserts that British decline was associated with EU membership and belongs in the past, and that the economic problems can be solved by the application of will. Barnett claims that if you want to know the Government’s policy, just read the Mail. (However, nervous true believers on the Mail are beginning to wonder whether Mrs May is wavering.)

Mail’s leading article of 13th October 2016 was headlined ‘Who will Speak for England?’ For a start, Paul Dacre will - and he will maintain a senior role at Associated Newspapers when he stands down as editor in November. And should his health begin to fail him, there is no chance that he would go out with a whimper. Brexiteers would look for a champion in the press who is no less driven. There isn’t one.