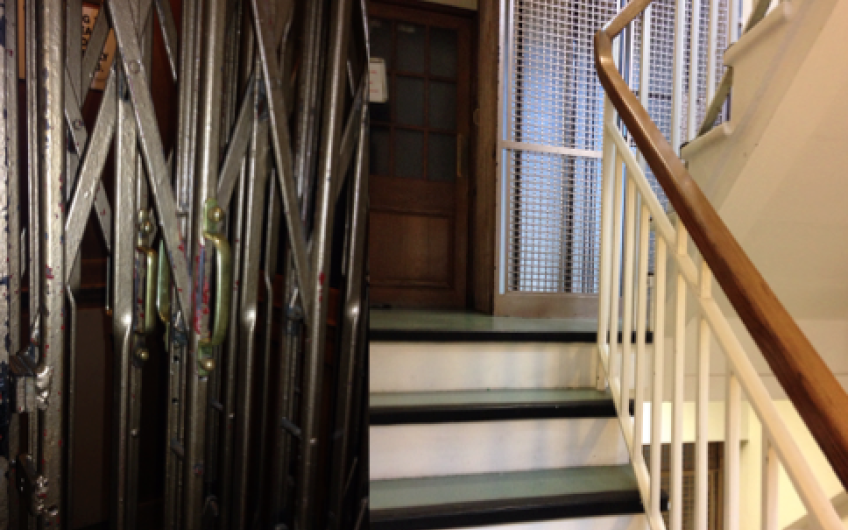 I first started subbing for The Oldie in about 2011. I had taken voluntary redundancy from the Evening Standard to go freelance, and I decided it was somewhere I really wanted to work. The Oldie has only ever had one full-time sub; I got her name and pestered her for months asking to be her holiday cover and eventually she gave in. A few months later, she had to have two months off because of illness, and that was when I did my first long-term stint on the magazine.

At that time The Oldie was still in its Newman Street office, which consisted of one gloriously packed and untidy room with a kitchen at the back and a ramshackle roof terrace with cracked plastic windowboxes full of dying plants. Best of all, it had one of those concertina-doored clanking lifts that have all but disappeared from office life. The hall and stairs were covered in pea-green lino (the lift and floor, pictured above), the sight of which, as I let myself in every morning, would give me a surge of happiness. I felt like someone out of a Muriel Spark novel set in the Seventies.

Crucially, it was the actual copy-editing that I loved. After years in newspapers, where there is always a lot of dross along with the better, more serious stuff, there wasn’t a single article that I wouldn’t have read voluntarily for pure pleasure. Even better was the fact that I no longer needed to know how to spell Cara Delevingne’s name, or who Harry Styles was. Having been used to daily deadlines, It took me some time to get used to being on a monthly, and I would dawdle horribly for the first couple of weeks and then get into a right old deadline-induced panic at the end.

I’ve been The Oldie’s full-time sub for three years now and loved almost every minute of it. I’d never go back to newspapers. It is no surprise to me to find that magazines like ours are the only growth area in print journalism. It is after all the place where you still find exemplary writing on interesting subjects, week after week, or month after month – not just in The Oldie, but in the Spectator, the New Statesman and Prospect, not to mention the Literary Review and the London Review of Books. It has for me, been the perfect last stage of a life on the journalistic shop floor.