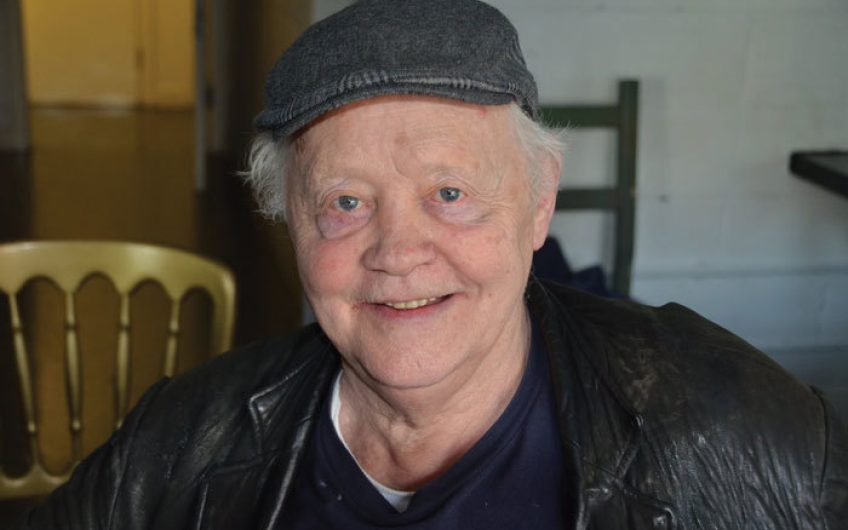 Dudley Sutton – actor, raconteur, rebel, writer, poet – was born in 1933. He served in the RAF, was thrown out of RADA and then worked with Joan Little-wood. His long and varied career has included parts in Lovejoy, Dixon of Dock Green, The Sweeney, Smiley’s People, East-Enders, Holby City and plays by Samuel Beckett, Sam Shepard, Alan Plater and Howard Brenton. He was in Ken Russell’s The Devils, Fellini’s Casanova and took the title role in the first production of Joe Orton’s Entertaining Mr Sloane. He has performed one-man shows at the Edinburgh Festival and Glastonbury, and recently played Billy in Michael Morpurgo’s Billy the Kid and the Fool in Lear.

Dudley Sutton has never been employed in a BBC costume drama despite the fact that he has been in the business since 1957. Do you know why? Because I’ve got a flat nose which makes you working class in the BBC’s view and in the industry’s view generally. It prevents me from playing literate roles. I’ve always wanted to be in Midsomer Murders. It’s full of solicitors, doctors, vicars and generals, people with wonderful dialogue. You know what they sent me? Old man sitting in front of afternoon television dribbling into his cardigan.

Are you as rebellious as ever?

It becomes more particular – you aim at specific targets rather than the whole world. My targets are health and safety, and how to protect the English language. The language is the expression of the attitude. The attitude is one of shame. People come to you and say ‘Do you mind if I ask you how old you are?’ You say ‘no’. It’s as if they want to say ‘Will you show me your arse?’ It’s some weird idea that it’s shameful to be old, something that is sick and smells rather bad instead of a source of pride – that one is a receptacle of years and years of being in the world. Why should I be ashamed of it and why should you be coy about it?

Is there anything you’ve given up because of your age?

If you do something that inhibits your growth, and most addictions inhibit your growth, eventually there comes a time when either it kills you or you wind up in the nut-house or you decide ‘Forget this, I’d sooner live.’ So you

find ways and means to stop it. Then you flourish again. I really do believe

I’m just starting out every day. When

a love affair. I wake up and I’m in love because I’ve got this wonderful show

As you get older, do you get wiser?

If knowing that you know nothing is wisdom, yes. Or maybe that’s just a smart remark. Of course you do know things.

Bone in Hangover Square with Celia Imrie and Anne Lambton, Billy the Kid, Henry V in a tiny theatre in Hoxton years ago. I liked being in EastEnders. When I was working with Shane Richie we got on very well. It was like playing really hard mean tennis, but I didn’t like the stuff around it.

I was in Cornwall and these two girls started to scream and I said ‘Now come along. I’m seventy-seven, this is silly.’

What’s a positive good change in your lifetime in the world at large?

How are you with modern technology?

I love my laptop, my iPhone and my Bose.

Who were the main influences on you?

The first was a man called John Engelhart, a classics scholar from Oxford who was the reluctant headmaster of a small prep school in Devon. The wonderful thing about that institution was that it didn’t matter if you were no good at sport, you could stay in the library and read. His influence opened up my mind to literature and music, to art, drama, poetry. Another great influence was Joan Littlewood. It was a love/hate relationship, as all good teaching relationships are, I think.

Can you describe your basic philosophy?

Here’s a quote from Brendan Behan: ‘Every cripple has his own way of walking.’ Tolerance and understanding of other people are what’s important.

I’m getting awfully tired of that Dawkins bloke. I wish he’d shut up for five minutes. There is magic in the world, Mr Dawkins. There is spirituality in life.

Do you think more about death now?

I do at the moment because people are trying to kick me out of my flat. Why do people kick people out of their homes? So they can make more money. My children were born in that flat. I’ve lived there for 42 years. Somebody comes along because they’ve got a few million, they can get me moved. Capitalism – there’s something that’s damaged society relentlessly since Margaret Thatcher – the legalisation of greed. Cameron – now there’s a man who has absolutely no experience of anything except how to smirk. He’s got that Eton smirk, that Eton giggle. It’s squalid.

Do you have any fear of death?

No. You don’t want to choke on your own phlegm or be eaten up by cancer, but the actual business of death has no fear for me. You just get tired and go to sleep. You go back into the chemical make-up of the universe. My granddaughter was born in my flat and I saw the birth. I suddenly had this extraordinary understanding that my genetic job was done. The family would go on down the generations. You could see it. It’s a wonderful feeling.

What is the downside of being older?

Limitations on energy. Things run down.

Do you live with anyone?

Actually I love being alone and live on my own because I never managed to get on with somebody well enough to live with them for any length of time. I’ve never got past the notion of being in love turning into loving. You get a hell of a lot of sex until you get bored with each other, then you start rowing, then you split up, then you go crazy until you find something else. I’m too immature to live with anybody. So that’s a bit of wisdom. Know what you can’t do.

How would you finish the sentence life is a…?