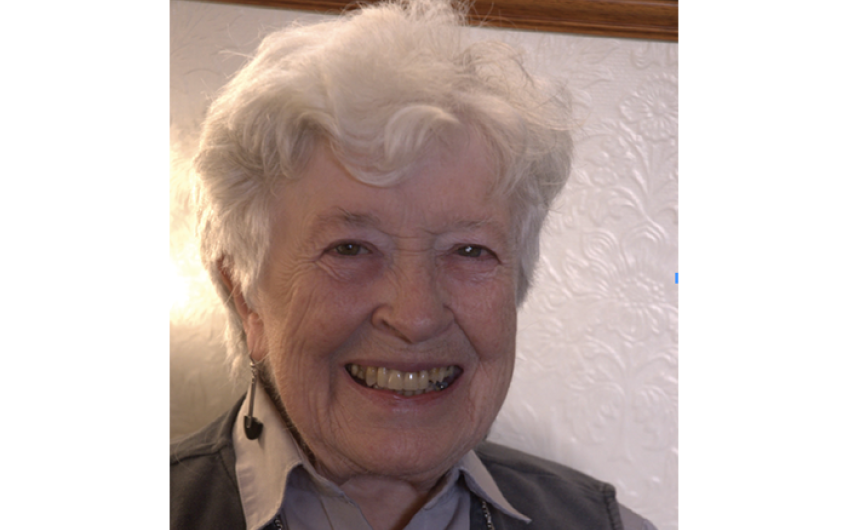 The Reverend Canon Kate Tristram was born near Stourbridge in 1931. After studying history at Oxford she did an MA in theology, eventually becoming Head of Theology at St Hilda’s College, Durham. In 1978 she moved to Holy Island as warden of a retreat, Marygate House. In 1983 she became Deaconess of the Parish Church of St Mary the Virgin, Holy Island, and in 1994 she was ordained as an Anglican priest. In 2000 she enrolled at Edinburgh University and was awarded an MSc in Medieval Language and Text. In her late seventies she wrote two books, The Story of Holy Island (Canterbury Press) and Columbanus: The Earliest Voice of Christian Ireland (Columba Press) She lives on her own on Holy Island.

Were you always a committed Christian?

No. It started in the sixth form. I listened to a series of radio plays about the life of Christ – Dorothy Sayers’s The Man Born to be King. My family wasn’t church-going and it was an eye-opener. I thought with amazement how much I didn’t know. I read whatever I could get hold of and went on a church crawl. At college I met people, went on reading, became an active church member and was confirmed in the third year. I felt enlightened – life had taken on an extra dimension. I wanted other people to know the Christian tradition and faith. I wanted to be ordained so I could work in a parish. If I’d been a man I would have been ordained at 23 when I finished my theology degree. In 1994 I was among the first women to be ordained.

Was it unfair that it took so long?

I always seek to understand historical circumstances. It happened at the right time, but to delay it any longer would have been unfair. The first vicar I worked with on Holy Island invited me to become a deaconess, the only thing women could do at the time in the C of E.

We were still lay but could take some services. In 1987 the church decided women could become deacons and be considered clergy, and for the first time we wore dog collars, voted with the synod and conducted marriages. But to give communion you had to be ordained. Being brought up agnostic, I have never been one of your 100 per cent true Christians. I still have doubts. That’s a good thing – it keeps you re-examining things.

Are you not certain there’s a God?

Certainty’s not given to us in this life but you can be convinced without being certain. You have to take people like Richard Dawkins seriously – they might be right. You should examine the basis of your faith all through life. As you gather new experience in old age, as in early life, you need to re-evaluate your faith in the light of it.

What are the bad things about getting older?

I experienced a bad thing last September – a knee replacement due to age-related arthritis. But I am very healthy. I’ve never smoked and hardly ever drink. My hearing is good. Since having my cataracts done I have good long-distance sight, but can’t see a thing close to without my glasses.

And the good things?

You don’t worry so much. It’s a kind of freedom. Like all younger people I worried about what people thought of me, if I was going to be successful, what I should do in life. I also enjoy that aspect of getting older which is having a long memory.

Do you regret never having had a family?No. I never wanted to be married or have children. I didn’t want to be a mother or a wife. I wanted to be just me doing what I wanted to do in life.

Do we get wiser as we get older?

There’s a quote from a famous Christian, ‘As I get older I get more and more sure about less and less.’ Perhaps it’s wisdom not to know whether I’m wiser or not.

Do you think more about death?

Yes. It makes me feel very serious. We believe in judgment. After death we will have to face the truth about how we lived, which might be difficult. I don’t think God sits on a golden throne; I think we will be judging ourselves. Death doesn’t frighten me. It’s going to be much greater, more glorious and demanding than anything I’ve ever experienced – judgment and beyond – whatever God asks us to do. Perhaps these ideas sound strange – I don’t think so, but others may.

Do you have a sense of God – an image?

I don’t have a visual image of God. But I do have a sense of him. This is personal and I don’t know whether one should put it in, but I’ll tell you anyway. One Christmas Eve I’d been to see my mother in a care home. She had Alzheimer’s – she was in a worse state than she’d ever been in, and, as it happened, she died a day or two later. When I got home I was more miserable than I have ever been and felt that I didn’t want to live. But I thought I can’t put an end to my life. I thought I’ll ring one of my friends and then I thought no, it’s Christmas Eve, I won’t spoil anyone’s party. I just felt totally empty. And then – what can I say? I was aware that God was there. What do I mean by God? I didn’t see anything. I didn’t hear anything. But it was recognisably the personality of Jesus as in the gospels. The strange thing was that he was laughing. I remember feeling intense fury for a moment – what are you laughing at when my mother is dying? And then something from him took over – it was as if confidence, hope and joy communicated itself to me. When I came round from this experience, which couldn’t have lasted more than two or three minutes, I had a broad smile on my face.

Why is this wonderful experience so private?

But you don’t care what people think any more…

(Laughs). You do care when things are very precious – and that’s one of the most precious moments of my life.

What quality in human beings do you appreciate most?

The desire to search for truth whatever your area of study or circumstances – when nothing will satisfy you unless you have got as near to the truth of things as you can.

You are writing a third book?

Yes. It’s on the hermits of the Farne Islands. People know about Cuthbert but there were hermits there right up until Henry VIII dissolved the monasteries. I will go to the islands but you can only go to them in the summer. I haven’t got a publisher because I want to take it at my own pace.

Your own pace? The publishers couldn’t keep up with you! You wrote your first two books in 12 months in your late seventies.

Do you use a computer?

I write on a word processor. I don’t use the internet. I don’t like the thought of it, or of email – fancy filling the lovely clean air with all those nasty messages. I could never twitter – birds twitter, not people. I’ve got a laptop but I only use it for the parish magazine, which I have been editing for nine years. I have a co-editor who designs it, and I try to persuade people to write for it.

How would you finish the sentence ‘Life is a…’?

A challenge or opportunity.