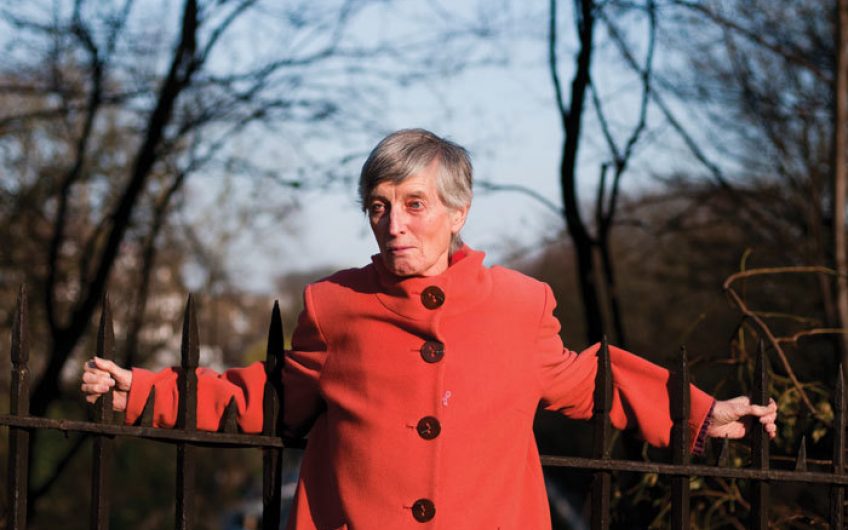 Seventy-seven-year-old Wendy Savage, the consultant obstetrician and gynaecologist, is famous for her lifelong campaigning for women’s reproductive rights. She was Senior Lecturer in Obstetrics and Gynaecology and Honorary Consultant at the London Hospital Medical College in the 1970s. In 1985 she was elected as a Fellow of the Royal College of Obstetricians and Gynaecologists during a period of suspension from practice on false charges of incompetence. She wrote about the experience in A Savage

Reinstated in 1986 as Honorary Consultant at the London, now Royal London, Hospital she became an Honorary Visiting Professor at Middlesex University in November 1991, a position she still holds. She was an elected member of the General Medical Council from 1989 to 2005.

Professor Savage has written and co-authored several books and many papers on women’s health and childbirth. She has lived and worked in five countries on three continents and currently lives alone in Islington, North London.

How does getting older affect you?

I don’t feel particularly old although when I tried to play squash with my fifteen-year-old grandson recently I did think perhaps I was getting old – but there isn’t anything I can’t do that I want to do.

What are the advantages of getting older?

You’re more philosophical. You don’t get so upset because most things have happened to you and you’ve coped with them, so you have strategies for dealing with them.

Does that mean we get wiser with age?

Not necessarily – some people get incredibly foolish. But hopefully you learn from experience and don’t make the same mistakes, so in that sense you are wiser.

Are you happier as a result?

There’s such an emphasis on happiness these days, but I suppose I’ve always been pretty happy except when something’s gone wrong – and that’s not terribly different now from how it was before. I’ve often been too busy to think about whether I was happy. And I’m as busy as ever. Before I retired people kept saying once you retire you won’t know how you ever found time to work and I thought what a stupid thing to say – but now I see what they meant! For the first five years I did a lot of work on the GMC for disciplinary panels. I’m still involved in Doctors for a Woman’s Choice in Abortion and am co-chair of Keep Our NHS Public.

But do you have more time to relax?

Yes, I wake at seven and listen to Radio 3. I should do twenty minutes of exercises but I get up and start emails, and that lasts two hours. Then I do my exercises. I used to get home at 10 o’clock at night and now I sit down to Channel 4 news at seven.

What has happened in your lifetime that shows the greatest progress?

The welfare state and the NHS – Freedom From Fear was the name of the founding booklet, and none of us who’ve grown up with the NHS have ever had to worry about whether we could call the doctor. The Health and Social Care Bill will turn the NHS into a market and lead to the fragmentation of our health service. The private health corporations, mainly from the USA, are circling like vultures – they would destroy our NHS.

What are the best inventions in your lifetime?

Computers. And the internet’s wonderful. My daughter gave me a mobile in 2002 saying I really had to be in the 21st century. When my son got an iPhone I thought it was a nice thing, so I got one.

In 1985 some of your colleagues accused you of incompetence. You had the support of many senior colleagues in the medical profession and the case became a cause célèbre before you were entirely exonerated of all accusations. In a nutshell, what motivated your accusers?

I think some of my male colleagues couldn’t bear having a strong woman with opinions in their department. But I’ve always found it hard to understand how a group of men could gang up to ruin one of their colleagues’ career just because they disagreed with the way she approached our profession.

There are far more women now in obstetrics and gynaecology. But I know of one woman, a committed Christian, who has had a very difficult time with her male colleagues, so it can still happen.

Do you think more about death as you get older?

No, and I don’t fear death, I don’t believe there’s an afterlife. I do fear having a stroke and being forced to live when I don’t want to. We should have the choice to be able to say ‘If x happens, give me something so I go to sleep and never wake up.’ I must do a living will, but it always seems to be at the bottom of the pile of things to do.

How do you keep fit?

When I retired I took up fell walking and can do four-hour walks even though I had spinal stenosis, which I suppose was age-related. For a while I couldn’t walk without pain, then two years ago I had an operation. I’m fine now. People keep telling me to sell my house because it’s on five storeys and one day I won’t be able to cope. I could sell it tomorrow because it’s in a desirable place, but meanwhile it’s good exercise going up and down the stairs all the time.

Do you find we are treated differently as we get older?

Definitely. Some people walk past you as if you’re not there. You’re talked about as a little old lady, as if you don’t have a mind of your own anymore. You’re seen as past it, particularly as a woman – all that stuff at the BBC about women not being news readers because they get a few wrinkles! There’s far too much emphasis on appearance and not on what people know and how they put it across.

What would you like to do that you’ve never had time for?

I’ve got seven grandchildren aged 18 months to 25, and one great-grandchild. I’d like to spend more time with them.

How would you complete the phrase life is a…?