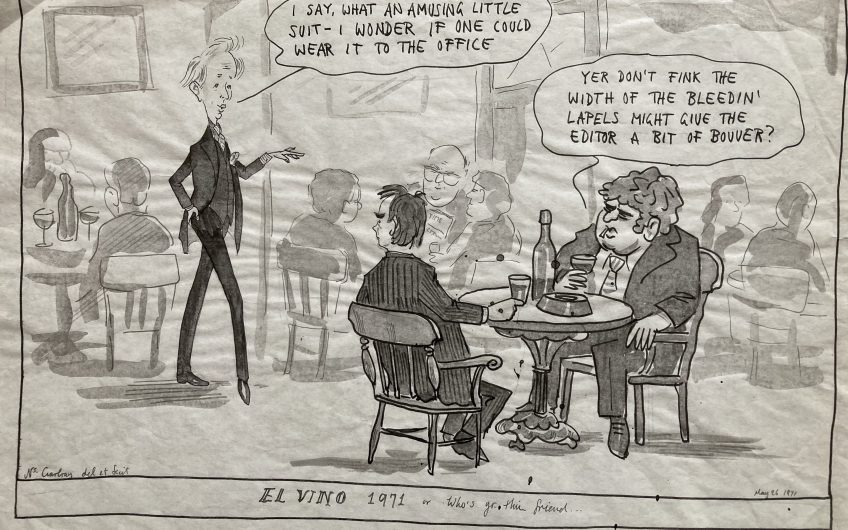 The Godfather. Some memories of a Grand Innocent

It is probable that when I first met Perry Worsthorne I was wearing a dress, though thankfully I have no memory of the event. It would have been at my christening in early 1953 and Perry was one of my godparents and indeed as the person who introduced my parents to each other could be considered as one of the authors of my being.

My father, Colin Welch, and Perry had formed an unlikely but enduring friendship at Stowe before the war. Though both became intellectual conservatives, they could not have been more different. Perry the elegantly well-connected high Tory stepson of the governor of the Bank of England and my father the precociously bright low Tory son of an eccentric Cambridgeshire squire who apparently used to cut his toe nails at the table.

I have thought about this friendship a lot over the years and can only conclude that it was based on a shared affection for the Bohemian, whether high or low, a great sense of humour, and an ability to recognise the absurdity of their own circumstances at certain times. They did also share through death or divorce, disruption and no doubt sadness when they were little boys. Whatever the case may be and despite many ups and downs Colin and Perry remained friends until my father's death some 15 years ago.

As the godson, I was slightly responsible for a fairly major down in this friendship. When I was a young teenager, there was an annual godfathers' dinner. Perry and a couple of other godfathers kindly invited their godchildren, including Perry’s daughter Dominique, to a dinner normally held in relatively groovy establishments like The Spot or 235 Kings Road. I thought this a delightfully sophisticated event and pontificated happily to the oldies about teenage issues as I saw them.

Some discussion of my very light, but no doubt exaggerated pot-smoking activities must have come up, because a couple of weeks later Perry wrote a piece about the conversation in The Sunday Telegraph.

It was a liberal high Tory article as I recall, raising thoughtful questions about the young and their activities in what was then the swinging sixties. This would have been enough to set my father off in the first place, but worse I was slightly outed as a pot head. I was not named but was described as a godson which as my father noted would have been known to some of the staff at Stowe where I had also ended up.

A stiff letter was sent to Perry, and a period of froideur ensued. One sentence lingers in my mind "If you hear that Nicholas is smoking marijuana, I would appreciate it if you informed me before telling the three readers of the Sunday Telegraph.” As the deputy editor of the high circulation, low Tory Daily Telegraph my father was always irritated by as he saw it, subsidising the low-circulation, high Tory Sunday Telegraph.

In fact there were no bad repercussions for me and indeed my kudos amongst the fast set at Stowe was much enhanced as whispers began to circulate as to the actual identity of the ‘stoner ‘godson.

Shortly before my 21st birthday, my already distinguished godfather added to his street cred as far as I was concerned by becoming the second person to say fuck on UK television. This did not go down well with his proprietor at the Sunday Telegraph, but I was obviously very happy to have him at my party. He arrived, tall, dapper and elegant with his first wife Claudie, short, very French, very funny and very direct

“My dear boy,” he began sonorously, ” very many congratulations on achieving your majority. What an auspicious occasion this is, as you now embark on the great adventure that is life. May I take this opportunity to wish you Godspeed and to…”

At this point Claudie interrupted. “Ave you got ‘is cheque?”

“Really, Claudie this is hardly the point.” Said Perry.

“It is absolutely ze point. Give ‘im ‘is cheque, you old meany.”

A cheque did appear, though written at the time or taken from a pocket I can’t remember. Typically it was from Drummonds, a suitably smart but slightly left field private bank – I think Perry would have thought Coutts a bit flash

He was essentially a club man and whilst my father was a pub man I have some sympathy with Perry’s position and indeed at one stage he even volunteered to put me up for the Garrick despite my vulgar activities in advertising. I’m sure he would have done so, but I did not pursue the matter.

In his later years my father decided for some reason that he should finally join a club. Perry and my family lobbied heavily for the Garrick.

“No, no I don’t think so, too many friends too much fun, I shall be in the bar all the time.” He said.

He joined the Travellers instead, in which we had a number of mournful family dinners as Monsignor Gilbey tottered to and fro.

Following the death of his first wife Claudie which was a great loss, Perry married Lucinda Lambton and their wedding was a memorable riot. A fine Cajun band from Derbyshire (the unlikely home of UK Cajun music) had been engaged, undoubtedly by Lucinda, so we danced until we dropped and the children begged for us to go home. The clue is that Perry always went somehow to the different. Claudie was different, my father was different and Lucinda is different.

I will always remember Perry and his family with huge affection, many smiles and much laughter. He was one of the last links to my father and mother, a man of immense charm, style and wit, considerable indiscretion and above all grand innocence.