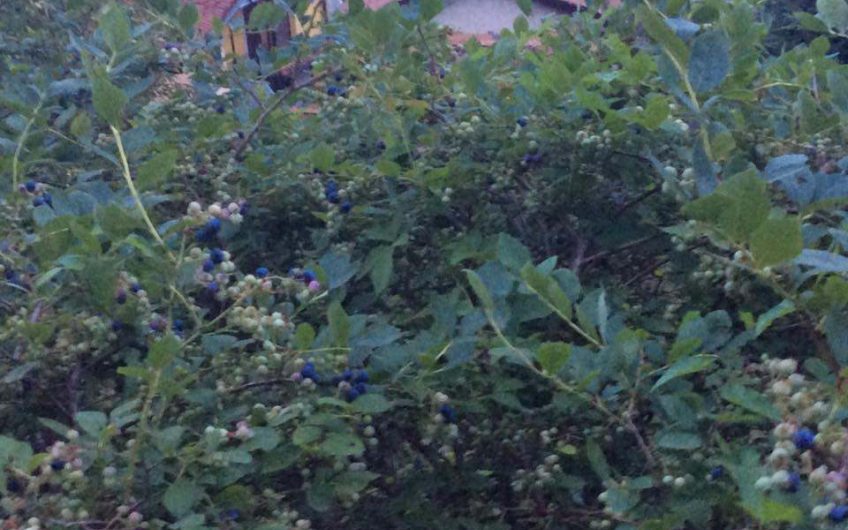 The man picks up an aubergine and studies it intently. He turns it over in his hand and with his thumbs, gently presses the dark purple, outer skin. He lifts it towards the light and down to his nose to smell it. He nods, hands it to the woman across the boxes of vegetables and she puts it into a bag for him.

We are at the fruit and vegetable stall in the Stresa Friday market. All the produce is Italian in origin and not flown from the other side of the world. It’s a matter of nationalistic pride, but the benefit to the fight against global warming is welcome. The stall is run by Cristina, a slim, middle-aged woman, with neat brown hair and glasses. Her bookish demeanour contrasts with her sister-in-law, who is wearing a low-cut, cleavage outing top and tight jeans with spangles and sparkles. Her big eyes are adorned with bright blue eye shadow and her long frizzed hair is dyed silver-white.

Cristina and her sister-in-law always help us pick out the best produce. When we get home, we lay out our spoils on the kitchen table. The basil gives off a heady scent when it is taken out the paper bag. The carrots smell earthy with a flavour from some forgotten recess of childhood, before fruit and vegetables were packaged into sterility by long flights and plastic wrapping. When I bite into the plump peach, the juice runs down my arm. Sweet oranges evoke memories of taking fruit from the tree of an orchard on my uncle’s South African citrus farm. We spent so many years eating flavourless and odourless fruit from supermarkets in London. To eat the best of them in the warm sun is like being reborn.

For lunch we have cheese and salami bought that morning from the stall run by a cheerful couple in their seventies. When they threw back their heads and laughed uproariously at the way I pronounced the cheeses, it was hard not to notice they only had about five discoloured teeth between them. Their cheese is sensational; creamy mozzarella, crumbly parmesan with a salty tang, pecorina with walnuts or pears and the soft cheese ‘bastardo’, called that because it is made with mixed milks.

One thing we don’t have to buy at the market is blueberries because we have bushes of them on the terraces. As the hot humid haze of July reaches its zenith, dissipating winter’s arthritic aches with its intense, sauna-like warmth, our blueberries burst into fruit. When we came to look at the house and Gianni, the previous owner, pointed to them, we thought he meant myrtle trees. We looked up the translation of ‘mirtilli’ one day and discovered we had bypassed a goldmine of blueberries our first summer.

Gianni stopped his Vespa outside the gate one day on his way down from his allotment backing onto our garden. He wanted to know if the blueberries were ripe. We told him they were under a siege of overgrown grass, which needed to be cut by a strimmer. When ours broke, we tried using a scythe we found in the garage, but hours of toiling away with no noticeable difference did not have the charm of a Thomas Hardy novel.

Gianni went off and came back with a petrol strimmer tied to his back. We thought he had brought it to lend to us, but he set off up the terraces and for two hours, dripping in sweat, cut the grass, including the waist-high weeds preventing access to the blueberries. We offered to pay him, but he brushed us aside and asked if he could have a few blueberries instead. He appeared later that day with a huge plastic vat and spent an hour plucking the fruit. When I went to pick some the next morning, all the plump, juicy, blue-black ones had gone.

Gianni appeared at our gate a few days later with his plastic vat and said he needed more blueberries to make jam and disappeared up the terraces to pick the new ones that had ripened. He returned to our house that afternoon with his nephew and wife. Gianni said he had brought his nephew’s Canadian wife to explain in English how to make the blueberry jam. Out the blue, he asked if we wanted to buy his petrol grass strimmer for €450. We thanked him but declined. We couldn’t afford it and weren’t keen to have a combustible tank of petrol strapped to our back in the hot sun.

We bumped into Gianni’s nephew and his wife in Stresa the next day. ‘We were very embarrassed by Gianni.’ said the nephew’s wife. ‘He pretended he wanted to show you how to make jam, but he just wanted to sell you his strimmer. We didn’t know he was going to do that. We’re sorry. It made us uncomfortable.’

‘Si, mi dispiace,’said her husband, nodding earnestly. We tried not to laugh.

When the next batch of blueberries ripened, I rose at eight o’clock ready to grab them before Gianni. But he had already plundered the bushes. I wanted to tell him to stop taking our blueberries, but we were worried he would gossip to everyone in the village about how stingy the English were. As soon as the next crop appeared a few days later, I was up at the crack of dawn rushing up the slopes with my bowl to get there before Gianni. He was nowhere in sight. I collected a mountain of berries, waving away mosquitos and ducking away from bumble bees, diving towards the fruit like buzzing yellow and black missiles.

Holding my bowl of blueberries, I looked across at the mountains and was treated to a glorious panorama of pink, red and orange streaked across the sky, as the golden ball of the sun rose over the peaks. I heard the melodic sound of a blackbird and saw him pecking the lawn below. Another blackbird flew down to join him. As he was coming into land, out of nowhere Meschia the Persian cat leapt into the air and caught the bird mid-flight. I dropped my bowl of blueberries, shouted at the cat and chased after her, but she ran off with her prey. Later I saw the bird on the ground under the apple tree, perfectly intact, but dead. I hated it blackbirds were killed by the cat. I loved waking up in the early mornings to hear the dawn chorus of blackbirds serenading the morning air. They are the jazz musicians of the bird world. They don’t have just one bird song – they constantly improvise and change their tunes.

Later that day I was walking up the steps to the tower room, when I heard the sound of leaves rustling. I glanced over to the blueberry bushes which appeared to be moving. The branches were shaking and for a moment I thought a deer had left the forest and come into our garden. Then a voice said ‘Buongiorno’ and Gianni’s face popped out from behind the foliage. ‘Buongiorno,’ I replied and smiled to myself because I knew he would have slim pickings. He gave up after that.

For the rest of the season, we had plenty of blueberries. I froze the berries, made cakes with them, whipped up tarts and ice cream. I gave a bowl of blueberries and some of my berry cake to a French family staying in our holiday flat. They offered us a piece of the tart they made from the fruit I gave them. I took a piece of blueberry cheesecake to ninety-year old Annalisa. I knocked on her kitchen door, and she shouted: ‘Chi è la?’ ‘L’inglese’ I replied.

We walked past Gianni’s vegetable allotment behind the house one day and peered through the iron gate.

‘Hang on a minute,’ my husband said. ‘Aren’t those blueberry bushes?’

‘There’s at least eight of them.’ I replied. ‘Why was he nicking all our blueberries?’

The kindness of Christopher Booker