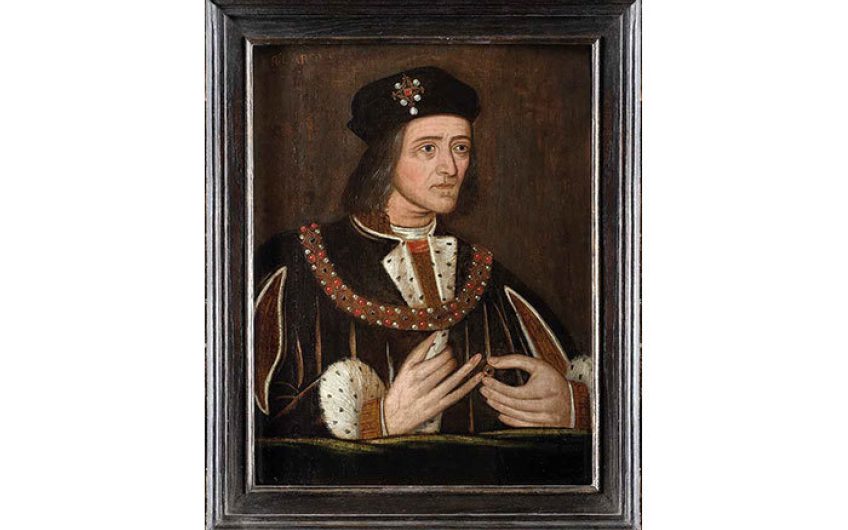 Now what did you think of? Let me guess: a tall, thick-set, lightly bearded man in a fine doublet and hose, arms akimbo, one jewelled hand resting by his dagger, stockinged legs set wide apart in the classic Tudor power pose beloved of today’s Tory ministers – all topped off with a feathered flat hat, in which more jewels are set.

That is how Hans Holbein painted Henry, as a Renaissance superman looking younger than his early forties, around the time of his marriage to Anne Boleyn. It is not necessarily how Henry looked, but how he wanted to be seen. Lucky for us that he liked Holbein’s portrait enough to encourage and distribute copies. The original – part of a mural of Henry’s dynasty – went up in flames in Whitehall Palace in 1698.

The Tudors were not the first to recognise the power of the reproduced image in an age before photography. Ever since a Lydian governor called Tissaphernes had coins minted with his rather forbidding profile on them in the fifth century BC, powerful people have seen the benefits of a familiar face.

But in England, the mass-produced royal portrait really took off under the Tudors, who wanted to show not who they were, but also where they came from.

At Anne Boleyn’s old home, Hever Castle, the current owners, the Guthrie family, have been recreating a classic Tudor portrait corridor, under the watchful and publicity-guaranteeing eye of Dr David Starkey.

The final piece in their royal jigsaw has just been revealed: a portrait of Richard III, painted – like all surviving pictures of the man who lost out to Henry VIII’s dad – posthumously. The portrait at Hever (never publicly displayed before) was done around the time Shakespeare wrote Richard III (written in around 1593), sealing him for all time as history’s wickedest uncle. It is reminiscent of the familiar National Gallery painting which inspired Josephine Tey’s classic historical-detective novel The Daughter of Time (1951), though the Hever Richard’s face is more wan, the hands fiddling with the signet ring more peculiarly elongated.

The publicists of the new acquisition demonstrate the lasting importance of images like these when they link the portrayal to the famous discovery of Richard’s bones in a Leicester car park, and conclude that it provides evidence that the king was an ‘evil, scheming hunchback’.

We could discuss the adjectives, but the noun is plain wrong. Scoliosis, the twisted spine from which Richard suffered, is different from kyphosis, which produces the Olivier-style hunchback. The Hever portrait looks as if it shows Richard with unequal shoulders, but I’ve seen worse.

The view of the king’s character that I glean from the portrait diverges sharply, as most renditions do, from Shakespeare’s energetic, almost ebullient picture of evil incarnate. The more official Tudor view, if that’s what we’re witnessing in such images, seems to have settled instead on portraying Richard as prematurely aged (he was only 32 when he died) and a bit pathetic, ripe for toppling.

At the time this Richard was painted, the monarch was Elizabeth I, who brought royal portraiture and its dissemination to its zenith.

Unlike her father, Henry VIII, Elizabeth did not have an official portrait painter, though the miniaturist Nicholas Hilliard came closest to filling the role.

Instead, she relied on courtiers to commission portraits, which is why you can see the ‘Rainbow’ and ‘Ermine’ portraits at the Cecils’ Hatfield House and the ‘Hardwick’ at, you guessed it, Hardwick Hall.

Art historians are sure that the man in the street would have known what Elizabeth wanted you to think she looked like, too. Portraits survive with much lower production values, evidence of a thriving market in depictions of the Virgin Queen.

Monarchs carried on having themselves painted, and getting painters to lie on their behalf, right up to the age of photography. Oliver Cromwell may have ended his days as king in all but name, but he was very exceptional in asking Samuel Cooper to depict him ‘pimples, warts and everything’. The identity of the traditional recipient of that advice, Sir Peter Lely, has been challenged: certainly Cooper’s Cromwell is a lot more warty than Lely’s. George IV was returned to older habits when he got David Wilkie to depict him in full Highland flummery, looking positively svelte for a man who was so fat he could hardly walk.

Reality has of course intruded, and the present Queen displayed her usual good sense in allowing her profile on stamps and coins to be aged (something her namesake never allowed).

But if all records of her reign are lost in some catastrophe, will future art historians conclude that Lucian Freud’s weird, green-tinged, five o’clock-shadowed Elizabeth II was commissioned by a mortal enemy?