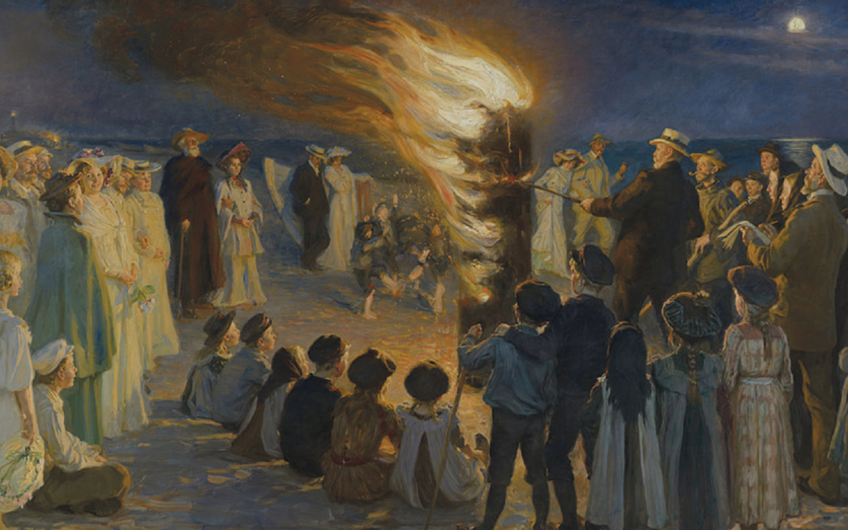 Niels Jensen represented my first experience of the happy-go-lucky Danes. Admittedly, it took place in the confines of an all-male boarding school. But, then, Scandinavia was as remote a location as the rest of England – so none of us ever asked Niels, who was in my year, why on earth he had swapped the land of blond free love for Victorian sadism and over-indulgent tradition. Instead of withdrawing into an introspective vortex of parent-blaming, it was wholly Danish of Niels to see his absurd plight as a cause for yet more giggling. His accent was thoroughly pukka and, on leaving school, he joined the Irish Guards after a spell at Sandhurst. On his first day, one of his men approached him with a serious complaint. ‘Sorr, I was told this was the Irish Army – not the British Army. I’ve joined the wrong side.’ Niels was able to give him immeasurable comfort: ‘Don’t worry, old man. I’m Danish. So I’m even more confused.’

A fortnight before my flight to Aalborg, I bumped into Niels, on a return from Hong Kong, his most recently adopted country. He was unable to offer any detailed advice about his homeland, other than to pronounce the beer Tuborg with the only Danish accent I’ve ever heard him use. He was, however, keen to stress the motherland was ‘absolutely ripping’.

His national pride, unabetted by years abroad, was replicated everywhere we went in North Denmark. Lars, our cheerful guide, was only too keen to tell us that the citizens of Aalborg belonged to the happiest city in Europe. Married as I am to a Yorkshire lass, I am immune to such unabashed self-promotion. The further north one goes, the worse it gets. In Iceland, self-aggrandisement and an abandonment of the facts are the national condition. In twenty years, they’ll be telling their children Iceland won Euro 2016, instead of reaching the quarter-finals. That said, I quickly grasped the two least popular expressions in Denmark are hygge and The Killing. Any allusion to the doctrinal opposites of faux-cosiness and homicide don’t marry well with their self-image of sunny frolicking. As we crossed the bridge from the airport into Aalborg, which I had to assure my wife was not the one in the eponymous Scandidrama, the driver conceded that Denmark is Norfolk-ly flat; its highest peak is just 171 metres. This very lack of a hilly horizon must have inspired Jørn Utzon, Aalborg’s most famous son, to design the city’s Utzon Centre. This archive and exhibition and conference venue is the northern cousin of Utzon’s Sydney Opera House – which he was commissioned to build by a left-wing government in 1957, before he was sacked by a short-sighted, right-wing government, terrified of rising costs.

Next year is the centenary of Utzon’s birth, and Aalborg is hoping for attention. Although this small city has some pretty 17th- and 18th-century streets, the modern waterfront wins first prize. The Utzon Centre, opened in 2008, spawned the adjacent Musikkens Hus concert hall, as well as some apartment blocks. In typical Danish style, the university rents these out to students for £300 a month, while, half a mile down the fjord, apartments in waterside properties are exchanging hands for £1.5 million. This perfect long weekend then extended to the very top of North Jutland and, hence, Denmark. On the 70-mile journey north, the flat countryside is broken up by ochre houses with red roofs, but sadly no sight of the country’s six million pigs, which created the best pork butty I have ever had, in a café opposite the Skagens Museum in Skagen. Everywhere we went in Denmark, the food was excellent – not greatly different from modern British, but delivered with greater conviction and love. Although wine is no more expensive than in Britain, beer is best. Both the museums in Aalborg had top restaurants, which few British museums could rival. We arrived at Denmark’s sandy riviera on a blustery day. At its tip, at Grenen, a three-mile sand bar splices the North and Kattegat seas, creating the tremendous wave clashes which inspired the 19th-century artists’ colony at Skagen.

In the 1870s, Denmark’s finest artists came and stayed at Skagen, some never to leave this deserted extremity. They set up shop in Brøndums Hotel, where they exchanged paintings and portraits in a wonderful, oak-panelled dining room – moved in its entirety to the nearby museum after the war, thus avoiding total destruction in a subsequent fire. The hotel is still busy, barely changed since Karen Blixen stayed. It hosts a succession of panelled dining rooms; there’s no TV or Muzak; bathrooms for some bedrooms are down the corridor, and tea (with love cake) is served promptly at four o’clock. Only then did I appreciate that hygge might be a reality.

Michael Ancher, one of the artist stars of the later 19th century, married the hotel proprietor’s daughter, Anna, who was born the night Hans Christian Andersen stayed. She turned out to be a better artist than her husband. Both the Anchers and the writer Holger Drachmann built one-storey houses near the hotel, still open to the public. They are complete with all their furniture and books. It feels like they left yesterday. From the outside, the recent extension to the 1908 museum leads one to believe a feast of modernity is in store, but, inside, is a collection almost wholly provided by the Skagen artists. Attracted by the light and the opportunity for sexual freedom, their preferred subjects were the fishermen who risked their lives just yards from the beach. They also painted the dunes and, to a large extent, each other drinking in the dining room at Brøndums or strolling down the beach. It’s the most extraordinary collection of seaside art imaginable: huge canvases cover every inch of the walls.

Skagen was delightfully empty in November, but the museum and Anchers’ House were open. In summer, it’s rammed. Spring, when migrating birds reach Grenen, is the best time to visit. The manager of the Brøndums hotel told me how, twenty odd years ago, an elderly German guest mentioned that the tree outside the hotel had been taken down. The old boy produced a photograph taken during the war, when he manned the concrete gun emplacement, a structure still on the beach. He enjoyed a perfect war among unhostile locals. In May 1945, he walked back to eastern Germany. Memories of Skagen sustained him, and he was determined that it would be the first place to visit abroad in peace.

He had kept his promise to himself. I too will be returning as soon as I can.