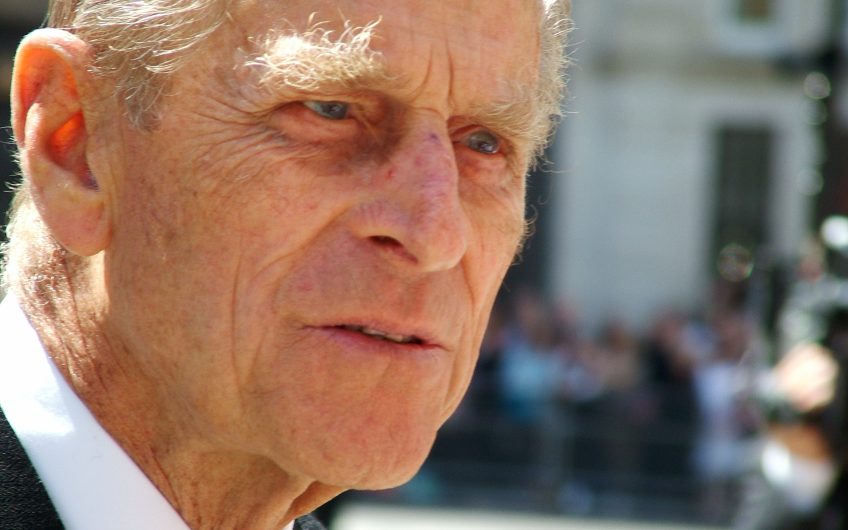 48 hours after surviving the car crash in which his Land Rover was overturned and he was badly shaken – and the driver and the passenger of the other vehicle involved escaped with minor injuries and a broken wrist – Prince Philip was photographed on a public road, behind the wheel of a new Land Rover, driving without a seatbelt.

I don’t condone the prince’s behaviour – it’s plain stupid to drive without a seatbelt – but I do admire his indomitable spirit and his ‘up yours’ attitude to the world. Because, more than forty years ago, I became involved in one of his pet charities (the National Playing Fields Association), I know him a bit, and I like his style. I make no claims to be a close friend of his, but I have written his biography – so I know his story.

He is a remarkable man, who endured a chequered childhood (his parents split up when he was ten), served in the Royal Navy with distinction during the Second World War (mentioned in dispatches), and, from 1947, over seven decades, delivered the goods unfailingly as the Queen’s consort and, in her words, her ‘constant strength and guide’.

In my book, he is a good man and, as the saying goes, you can’t keep a good man down. The Duke of Edinburgh is 99 today and, while he’s alive, he wants to go on living. Anyone who has read his book on the art of carriage driving – thirty years on, and off, the box seat – will know that he believes in the old horse-riding adage that says, ‘When you take a tumble, the sooner you get back in the saddle the better.’

Clearly His Royal Highness, reportedly dazed and distressed after the car crash last Thursday afternoon, was eager to get behind the wheel again and prove to himself, if to no one else, that he has not lost his nerve or his ability to drive. He has been a keen motorist for eighty years. It’s not easy to change the habits of a lifetime.

And it’s not easy growing old. Three years ago, he retired from public duties and his life since has become increasingly circumscribed. Given his great age, many of his closest friends and associates have died. (One of his favourites, the Duchess of Abercorn, passed away just before Christmas 2018, aged only 72.)

He used to manage the Sandringham Estate, where he spends much of his time, but last year he handed over the reins to Prince Charles – who is already making ‘changes’ there and the father may not approve of all the ‘improvements’ the son has in mind.

And now everyone – from members of the Norfolk constabulary to the tabloid press – is advising the duke to do ‘the right thing’ and give up the keys to his independence: the keys to his car, the last means he has left to go where he wants when he wants, and on his tod, if that’s what he chooses.

The Duke of Edinburgh is not quite the man he is portrayed to be. For example, he reads poetry. And to borrow a phrase from Dylan Thomas’s famous poem about death, Do not go gentle into that good night, I think we can forgive him ‘raging against the dying of the light.’ The duke dodged death last week on the A419. Defiantly, doggedly, perhaps angrily even, he’s doing what he has done all his life. Being true to himself and carrying on.

Reportedly, after the traffic accident, when he was pulled from the wreckage of his Land Rover, he said, ‘I’ve been such a fool,' and immediately enquired if anyone else had been hurt. Since then, apparently, he and the driver of the other vehicle involved have exchanged good wishes through a police liaison officer. It seems that the passenger whose wrist was broken in the accident, is unhappy that she hasn’t heard personally from the duke. In time, I am sure she will.

Whatever the public image of him may be, Prince Philip is a considerate person. Over the years, I have heard numerous accounts of small, unpublicised acts of kindness shown by him. He is good at sending thoughtful notes to people – letters of condolence, commiseration, or support - and I have no doubt he very much regrets the injuries caused to those involved in Thursday’s collision.

He is considerate, but he can also be pig-headed. He will be ready to show concern, but he may not want to admit culpability. And he certainly won’t be wanting to do anything at the insistence of the press and media. After seventy years in the public eye, he has retired from public life and he is relishing his freedom and his independence.

As the Queen’s consort, from 1947 to 2017, he did everything that was required of him. He turned up at the right time on the right day in the right place, wearing the correct uniform. His place was two steps behind Her Majesty and he knew it. He did his duty and more – and endured press coverage that frequently infuriated him.

Now he has retired. This is his time to be himself and, given the nature of the man, he will not take kindly to advice from others. He can be perverse, he can be stubborn and, while he is excellent company, he can also be quite frightening. Taking him on is not a task anyone would relish.

I imagine the only person who could successfully persuade the duke to give up driving altogether is the Queen – and I doubt that she would press him to do anything that was wholly against his wishes. Besides, just because he is very old and has been involved in one pile-up, does not necessarily mean that he is unfit to drive.

What the pictures of the prince back behind the wheel on Saturday show is that he wants to live the rest of his life his way and is determined to do just that. Having a security officer with you everywhere you go irritates him and, if it isn’t absolutely essential, he doesn’t want it. He does not want protection officers fussing around and he is quite capable of telling them to f--- off.

But he’s no fool, either. He is proud of being a pragmatist and realist; so I am surprised if he drives on public roads without a seat belt. (The Queen sometimes drives without a seat belt, too, and rides without wearing a hard hat.) He knows it is an offence to do so and he knows that you are safer with a seat belt than without one.

That said, perhaps he was doing it on purpose, giving his own one-finger salute to the world. I am reminded of a happy photograph taken many years ago of the prince having dinner with Frank Sinatra. As the Duke of Edinburgh approaches the final curtain, it seems the Queen’s husband is determined to make his anthem, ‘I did it my way.’

Anne Robinson and Norman Scott salute the return of the Oldie literary lunches after two years!