Prue Leith's drinking habit and her recipe for explosive marmalade 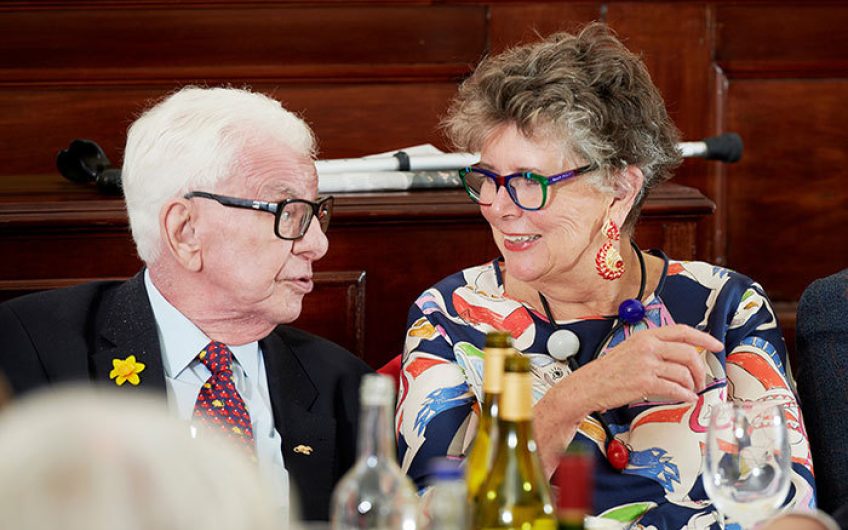 This week, Prue Leith, Matthew Sturgis and Hugo Vickers joined us at to our April lunch. Before the speakers had their way, Oldie editor Harry Mount put our minds at ease, declaring the lunch a ‘Brexit-free zone’, to the relieved cheers of the guests.

Prue Leith leapt at the chance to speak first, explaining that it ‘means that, once I’m done, I can get stuck into the wine first’.

When she first started writing at the Daily Mail, she told us, she got into a spot of bother with her recipe. While filing a recipe for Oxford marmalade, requiring two tablespoons of black treacle, she got the measurements wrong. She didn’t cross the ’t’ of tbs. In their confusion, hundreds of baffled readers rang her offices, having poured 2lbs of treacle into the mix.

A few days later, a ’squashy’, wiry package landed on her desk. In the days of IRA bomb threats, it was no joke. A bomb disposal man gingerly opened the envelope. The mystery envelope consisted of some marmalade toffee, two teeth, a brace wire and a sizeable orthodontist bill.

Matthew Sturgis spoke to us about Oscar: A Life. He told us about the daunting task of writing a book about Oscar Wilde. After all, so much literature has been dedicated to him. Recent books cover topics as diverse as his sex life, his library and his four-week holiday in Worthing.

Sturgis gave us an enthralling account of Oscar Wilde’s ambition. On the verge of university, a young Wilde discussed his future with his friends. Some were going to be lawyers; others landowners. He wanted to be a writer. But more importantly he wanted to be famous. At a time when the notion of celebrity was non-existent, it was a revolutionary stance. And he succeeded, becoming the talk of the town within only two years of getting to London.

Last to speak was Hugo Vickers, who spoke about The Quest for Queen Mary by James Pope-Hennessy, which he edited.

In 1959, Pope-Hennessy wrote a highly regarded biography of Queen Mary. The Quest for is a collection of his hilariously indiscreet notes from the interviews with the royals and friends of the royals who knew Queen Mary.

Vickers paid tribute to Pope-Hennessy’s exquisite style and his liberal and effective use of litotes: ‘the affirmation of the positive by the denial of the negative. For example, to express the greed of Edward VII, one might say, ‘the King was not known to toy with his food’.

Pope-Hennessy’s great fear was the red pen of the royal censor. Fortunately, with the help of Sir Alan ‘Tommy’ Lascelles, he was able to write with almost shocking frankness about the royal family. Describing Queen Mary’s enormously fat mother, the Duchess of Teck, as ‘a personage of unusual girth’ and quoting Lord Clarendon on the problem of finding her a husband, 'No German prince would embark on so vast an undertaking.’

Vickers then outlined the frustrating challenge of getting the fully unexpurgated book into print, thanks to Pope-Hennessy’s 50-year embargo on the juicy bits and the reluctance of publishers to engage with it.

Once again, we thank the wonderful Noble Caledonia, without whose dedicated support and sponsorship we could not bring you such wonderful lunches for such reasonable prices.

Return to Innisfree - John Stoker on The Quiet Man