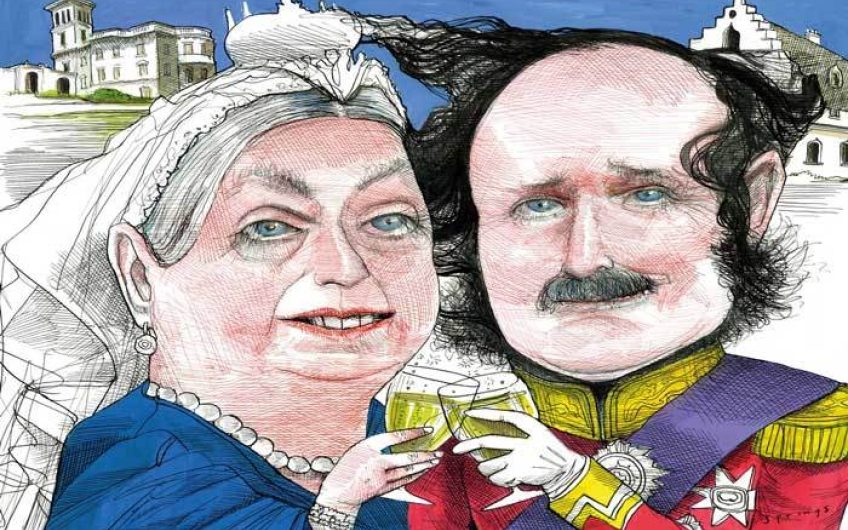 The births of Princess Victoria in May 1819 and Prince Albert of Saxe-Coburg and Gotha three months later were marked with little fanfare. Yet they would grow up to form one of the most remarkable couples the world has known, with a profound influence on the 19th century and beyond.

This year, institutions across the country will celebrate the bicentenary of their births. For our part, English Heritage will be marking the anniversary with an exhibition of birthday presents exchanged between the Royal couple at their private family home, Osborne on the Isle of Wight, where they nearly always spent their birthdays.

From Albert’s gift of candelabra – made in Birmingham using the latest glass-cutting technology – for Victoria’s 29th birthday, to the neoclassical statue of herself she gave Albert for his 30th, the presents they chose illustrate Queen Victoria and Prince Albert’s shared enthusiasm for art and technology, their love of family and devoted relationship.The couple delighted in commissioning paintings and sculpture throughout their married lives, many as birthday gifts.

Acknowledged to have understood and appreciated sculpture more than any of their predecessors since Charles I, they formed a collection that had few rivals in England at the time and remains of international significance. This gift-giving was undertaken with great ceremony and recorded in a series of watercolours of ‘birthday tables’, where great arrays of presents were displayed; they were an art form in themselves.

Osborne and its collections, particularly the birthday gifts, shine a unique light on the lives of Victoria and Albert, its inhabitants and creators.

After their wedding in 1840, their early married life was spent mainly at Windsor Castle and Buckingham Palace, but the latter needed major rebuilding and the former was too big, too draughty and too cold. In both, they were hemmed in by ministers, courtiers and servants. As a young married couple, passionately in love and with a growing family, they yearned for somewhere smaller, more private and more comfortable.

It had to be close enough to London for the Queen to conduct the business of State, but three technological advances enabled them to widen their search: the railway; steam-powered ships; and the telegraph. Helped by the Prime Minister, Sir Robert Peel, enquiries led them to Osborne House which they bought in 1845 for £28,000 (the equivalent of more than £2 million today).

Victoria liked the Isle of Wight. She and Albert were able to travel to the island by train and steamship from London in less than four hours. It was perfect.

Prince Albert worked with a friend and artistic adviser, Ludwig Grüner, and a builder he greatly admired, Thomas Cubitt, to create a contemporary royal residence that could be both family home and state-of-the-art palace. Albert was involved in every detail. Victoria loved the fact that he was so absorbed in it.

The building was completed in 1851 to a very modern design, combining the latest in fire-proofing and construction techniques, including running water to even the upstairs bathrooms. Albert was also able to feed his passion for garden design and farm improvement.

Osborne was a working estate with 2,000 acres of agricultural land. To the south of the house, he created Barton Manor, a model farm using the latest farming methods and steam-powered technology. He also designed and built cottages for estate tenants, a church at Whippingham, and lodges at the main entrances.

With its extensive grounds and coastal location, Osborne offered the privacy and space Victoria and Albert had been longing for. They could entertain informally, host private theatricals and watch demonstrations by scientists and inventors. The Queen could enjoy sketching, carriage rides and bathing in the sea. She and Albert spent time with their children in the nursery, on the beach or at the Swiss Cottage, where Albert created a miniature world for them based on his own childhood in Coburg. The beach area and the Swiss Cottage have recently been restored to the way they looked in those days.

Osborne was also a place of work for Queen Victoria. She spent several hours each day looking through official papers. Privy Council meetings were regularly held in the Council Room. Every serving Prime Minister from Sir Robert Peel to Lord Salisbury visited the Queen there, as did foreign royalty, diplomats, and representatives from the empire.

On 14th December 1861, Osborne’s role as a retreat was reaffirmed when, at the age of 42, Albert died. The widowed Queen was overwhelmed by grief and immediately fled to Osborne. Victoria now changed her annual routine, staying at her island home mostly in the winter and spring. Christmas was spent there, but she would never again celebrate her birthday or Albert’s on the Isle of Wight.

On 18th December 1900, she came as usual to Osborne for what was to be her last Christmas. She died there five weeks later on 22nd January 1901. Her son, King Edward VII, chose not to keep Osborne, and gave it to the nation on his coronation day in 1902. In 1904, it became a Royal Naval College for young officers – effectively a naval prep school. The future King George VI was a cadet there from 1909 to 1911, coincidentally overlapping with my own father. Sadly, I have no idea if they ever met.

In 1904, part of the ground floor of the house was opened to the public. Later, large parts of the rest of the house became a convalescent home for officers.

Today, Osborne occupies a unique position in the built heritage of this country. Unlike Hampton Court or the Tower of London, it is not a ‘historic royal palace’. Perhaps the term ‘historic royal family home’ fits it best. English Heritage looks after it for the nation, with great care and affection. We try to replicate the extraordinary atmosphere of that brief but wonderful period in its history – of a passionately devoted couple, with a thriving family combining work, fun, and the exploration of art and science that characterised their era.

Members of today’s Royal Family visit occasionally, most recently the Duchess of Cornwall, the Earl and Countess of Wessex and the Princess Royal.

The tradition of Osborne myrtle marks another connection from past to present. Since Queen Victoria’s eldest daughter Princess Vicky, successive royal brides’ bouquets have featured a sprig from the myrtle bush grown from a nosegay given to Victoria by Albert’s grandmother in 1845.

You can see the plant still thriving on the Italianate terrace at Osborne, carefully tended by a team of English Heritage gardeners and volunteers.

The hundreds of thousands of visitors we welcome to Osborne each year – as well as the popularity of the television drama Victoria, and the recent film Victoria and Abdul – all testify to the enduring fascination with the lives of Queen Victoria and Prince Albert.

There is no better window on to their lives than Osborne. I hope readers will join with me on 24th May (and again on 26th August) in wishing Queen Victoria and Prince Albert a very happy 200th birthday. And do come and see our exhibition there this summer.