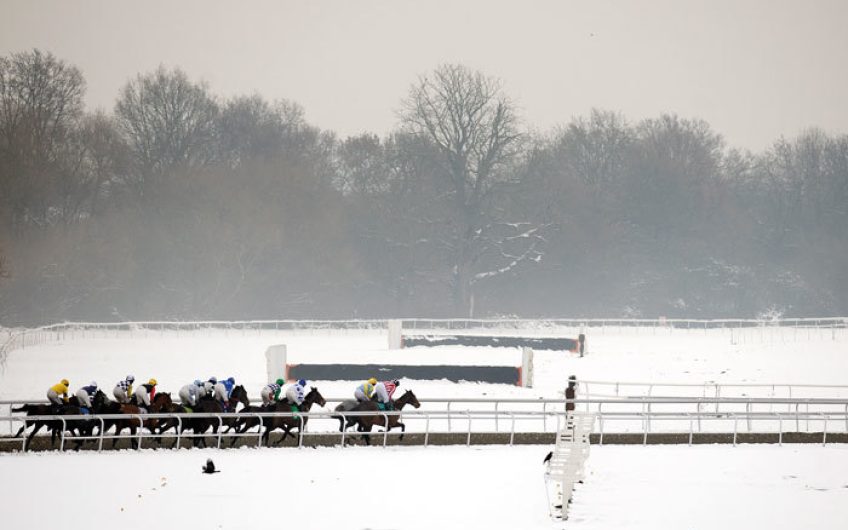 Ordinary citizens assess climate change by serious things such as melting glaciers and rising sea levels. Jump jockeys have a much more important measurement: how often racing is abandoned on Boxing Day, one of the great dates in the steeplechase calendar. Back when I was riding in the Sixties it seemed to be off all the time.

In the eight years between 1961 and 1968, there were at least three meetings lost every Boxing Day for frost, snow, flooding or, in 1967, for foot and mouth disease. The biggest Boxing Day race of all, the King George VI Chase at Kempton, was missed on five occasions. In 1962, the weather closed in on 22nd December with no more racing in England until Newbury on 8th March, just four days before the Cheltenham Festival. There were 21 runners in Newbury’s Novice Chase but only five got round.

Wonder why? For two full months, we had completely Alpine weather: deep snow, clear skies and sub-zero temperatures. In 1962, I was meant to be studying history at Oxford but, every morning, would drive up to Derek Ancil’s yard at Middleton Stoney and ride out with a little band, including Champion Jockey Stan Mellor. He would later win the 1964 King George VI on ground so frozen that I could blame no one else when I skidded and fell off an old rogue of a horse called Pallissy that Boxing Day – in the race before the big one.

Beneath the snow, the ground was sheet ice. Those mornings were an equestrian Russian roulette. The only area where we could exercise was a

200m ring on which the soiled straw from the horses’ stables had been laid to give us a secure footing. Well, it was semi-secure if you could keep on it, but riding a corned-up thoroughbred, confined to trotting exercise, is like being on a motorbike that leaps clean off the road if you touch the throttle, or

even if you don’t. Those early-1960s mornings remain with me still. Mind you, so do the afternoons. I can’t remember what happened to my history lectures; well, of course I can – I shamefully ignored them. But I will never forget the afternoons. In January and February 1963, the frost was so hard that we used to go to Woodstock and play ice hockey on the lakes at Blenheim Palace.

We only played on the lake nearest to the entry gates; the second one beckoned – empty, and exciting, but of unknown depth beyond the elegant bridge, part of Capability Brown’s masterpiece of a landscape. One afternoon, the temptation was too great. I shot under the bridge and did a solo and increasingly nervous, thin-ice circuit in front of the great pile where Winston Churchill was born. It would be nice to think I bore a carefree resemblance to painter Henry Raeburn’s iconic The Skating Minister on Edinburgh’s Duddingston Loch. In fact, my safe return under the bridge could not come soon enough.

Real jockeys are made of sterner stuff. On Boxing Day 2016, the excellent Tom Scudamore had spun up the M5, M4 and M3 to reach Kempton and win the King George on the wondrously powerful Thistlecrack – a repeat victory this December is their primary target.

On Boxing Day 1956, Tom’s grandfather, 1959 Grand National winner Michael Scudamore, needed a tractor to get out of his snowbound Herefordshire farmhouse, only to

find the King George was postponed to the next afternoon. He ended up spending the night in the Turkish Baths in Jermyn Street.

Back then, there were few finer – and certainly hardly any cheaper – places to stay in the West End. For jockeys, it was standard practice to have a far-from-teetotal night in London and finish it by going to the Turkish Baths. After a few trips to the steam room to sweat off excess poundage, cooling off in the cold pool, you would get wrapped up in towels and given a cubicle to doze in. You were woken with a cup of tea at whatever early hour you wanted. Michael Scudamore’s night in the Turkish Baths on Boxing Day 1956 clearly did the trick. The following afternoon, at the postponed King George, riding Rose Park, he set off in front and the devil took the hindmost. In second place was a horse immortalised for having not won the Grand National nine months earlier – Devon Loch.

Michael was one of my heroes. Fellow jockey (and later Champion Trainer) David Nicholson and I would join his Hereford train at Moreton-in-Marsh en route for London and then go on down to race at Wye, Folkestone, Plumpton, Lingfield or Fontwell. On the way back, we would stop in London and visit Wheelers fish bar in Soho before getting the train home.

Michael was a shorter, squarer

and, in his unassuming way, more uncompromising figure than his

for that matter, Tom’s father, eight-times Champion Jockey Peter Scudamore. Michael didn’t say much but, in a

race, no one matched the balance

and strength with which he could

coax even the heaviest-footed horse

However, he missed out on the best Boxing Day of all. It was in 1967, when the foot and mouth epidemic stopped all racing for six weeks from the end of November. Somehow, Stan Mellor (Champion Jockey from 1960 to 1962), David Nicholson and I ended up riding down in Cagnes-sur-Mer on the French Riviera. Six-footer David was such a giant alongside the diminutive French jockeys that the local paper dubbed him ‘Le plus grand jockey du monde’. This pleased ‘The Duke’ greatly and any suggestion that the reference was to height rather than eminence was dismissed as mistranslation.

The dangers in Cagnes came in more subtle forms than the mental torture back home – where you might wolf down Christmas dinner on a frozen day, before a sudden thaw led to afternoon panic and a slog round the roads in a sweatsuit.

– the Cagnes-sur-Mer racecourse, midway between Nice and Antibes –

has a stunning setting beside the Mediterranean with the snow-topped Alpes-Maritimes as a backdrop.

Chief among those interested in befriending us was a little French jockey called Robert. He didn’t seem to get many rides but took us under his wing. On Boxing Day evening, he showed

us an almost deserted Monte Carlo, where the bored hookers were almost begging for company.

When we thought about it, Robert seemed a bit too good to be true. In 1973, he was revealed as the jockeys’ linkman with the Mafia in the scandal of the Prix Bride Abattue – a big jumps race at Auteuil in the Bois de Boulogne. The bribery was so extreme that the race settled into two distinct sections with all the well-backed horses in a group a long way behind the leading pack, who were all outsiders. There were murders, suicides and jail sentences before it

Down in Cagnes, the apple of corruption was obviously being offered

to us, but our French was so bad and

our stay so short that the serpent never actually slithered down the tree. Hopefully, it’s not just the climate