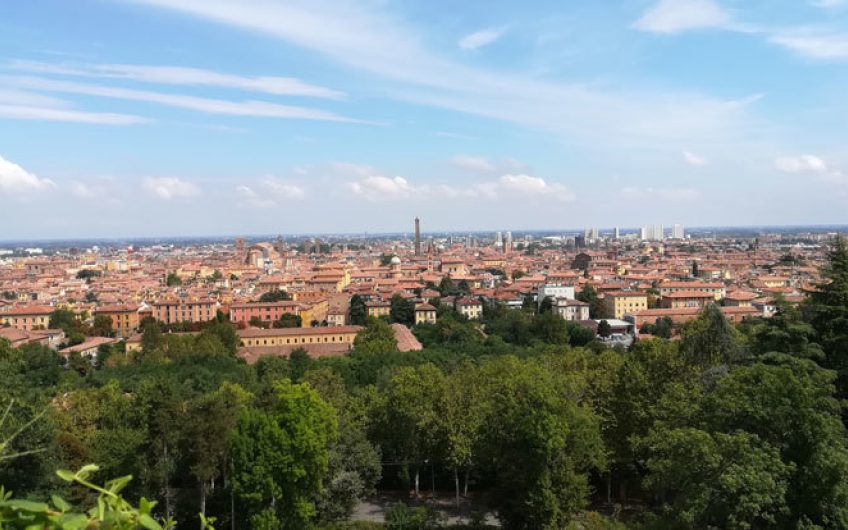 This is my first time here in Bologna – so I can't exactly compare it to anything I've seen before. But people's faces clearly tell you that something strange and unusual is happening here.

When my girlfriend and I saw a Bolognese friend of hers yesterday, just a few hours before the zona rossa was extended to the whole country, she, a doctor, was quick to brush off the hysteria of some people. Still, she couldn't hide how upset she was at just how empty the cafes were; how sterile the city atmosphere was.

We were having coffee amidst pigeons now emboldened by the scattered crowds to jump on tables and snatch what cake and coffee they could. At one point in the tussle with them, a lone passer-by with a lively look on his face came over to warn us that they were the very creatures carrying the plague. We thanked him with a smile, and he went on his way. We carried on the fight, armed with a water pistol given us by a waitress, and thankfully kept the creatures at bay until we left.

A few hours later, when we were sitting almost entirely alone in a huge empty restaurant near the centre, the order came in from Rome that we were soon to be officially in lockdown. We finished our food and, on leaving for a drink closer to the centre, we were confronted by the reality of it all: empty squares, the screeching of shutters being pulled down over shopfronts, the sound of young people and students now more audible in the streets that they can now rightfully call their own. They were drinking and laughing, and it was good to hear that at least someone was having a good time of it.

That was last night. Today is D-Day and it was just a couple of hours ago that we left our flat to brave the streets, full of trepidation and expectation. It's hard to shake the feeling that we wouldn’t see the alarm on the streets if we weren’t looking for it. The first thing we saw as we came out our door into a courtyard was a solitary figure standing outside a door leading to one of the flats in the complex. As we passed him, our eyes were drawn to the door on which we saw a printout with a red cross on it and the words "forbidden to enter" in Italian. Had this been here before and we just hadn't noticed or has the plague really come to our building? We are still not sure about this one.

The next thing we saw as we turned the corner onto the main street was an old lady standing on the pavement, absolutely paralysed by fear as we walked past. We smiled as if that could be enough to convince her we were not looking to infect her. Twenty or so yards behind her was an ambulance pulled up on the side of the street clearly paying a visit to somebody.

We are now sitting in a cafe drinking espresso, debating where to go for lunch before we head off to the airport this afternoon. It's relaxed here. People are talking and having a good time, albeit while sitting at some distance from each other. The people at the next table are actually laughing about some joke, would you believe? The biggest problem here in Italy is surely restraining naturally sociable, friendly and outdoorsy people from doing what they normally do. In England, telling people to stay inside may be easier to do.

In all, thanks, Bologna - it's just a shame we didn't get to see any of your museums. There'll be another time, I'm sure. Good luck to everyone. And now it's time to face quarantine back home in Britain!

Come and learn the secrets of London