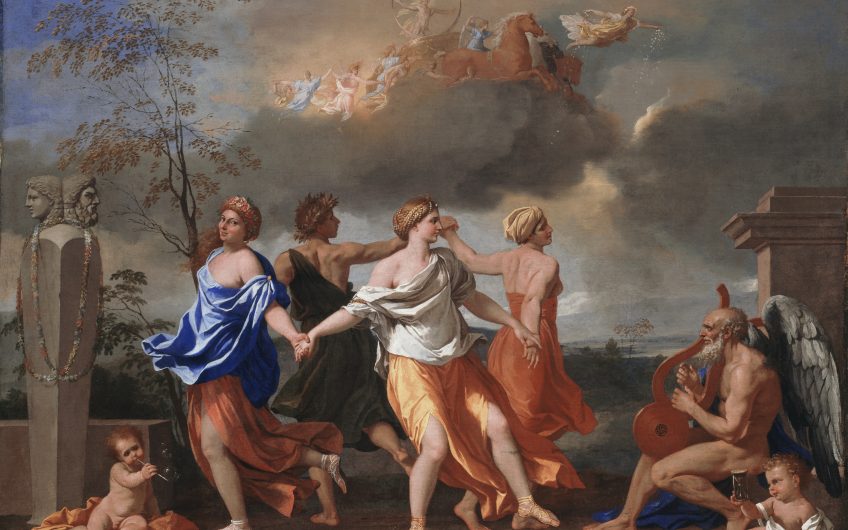 As Poussin's great painting goes on show at the National Gallery, Christopher Matthew remembers interviewing Powell about his masterpiece – and admiring his lavishly collaged boiler room

Few people can have devoted more time, care and enthusiasm to decorating a boiler room than Anthony Powell. So proud was he of the one in the basement of his Regency house, the Chantry, in deepest Somerset that he took me down there to see it. One of the most elaborate collages I have ever encountered covered not only the walls and the ceiling, but even the water pipes.

‘There’s Jilly Cooper. Vidia Naipaul. John Betjeman. Cyril Connolly. Harold Acton … It started off in a series of short bursts, but then I decided it wouldn’t do me harm to stretch my legs. I’m always coming down and adding somebody.’

Washing my hands before lunch, I felt as though I were participating in one of those games in which contestants are required to look at a number of objects on a tray, and then try to recall as many as possible. Lunch was already on the table and by the time I arrived, my score had shrunk to a pathetic two – Sophia Loren and Nancy Cunard.

Reading Powell’s memoirs many years later, I was struck by his description of the care with which he chose good wines for his more distinguished guests. ‘Vin exceedingly ordinaire, I’m afraid,’ he drawled as he tipped rosé from a jug, while his wife, Lady Violet, a sister of the Earl of Longford, served chicken casserole. As a hack – albeit from the Observer Magazine, there to puff the eleventh of his ‘Dance to the Music of Time’ novels – I probably ranked as a tradesman.

Several of Powell’s ancestors gazed at each other from heavy frames in the drawing-room. The place of honour was occupied by a handsome young man in dazzling uniform. ‘He’s very handsome,’ I said. ‘A young Duke of Wellington,’ he said. ‘He’s one of Violet’s relatives.’

It wasn’t until after lunch that we got down to the interview. Powell lay back on a chaise-longue and talked. About writing. ‘I type out thirty words, then I turn the thirty into fifty, the fifty into eighty and so on, going back over it again and again. It’s appallingly hard work. It would be idle to pretend it isn’t.’

About parties. ‘In the late Twenties there was a boat called the Friendship which was moored down by the Thames where a lot of them took place. They consisted of a curiously incoherent group of people. I mean, at one end of the scale there’d be quite smart types. Diana-Cooperish sort of figures and so on. And then there’d always be a lot of these girls who were living on the margin – you know, they’d do a little modelling; at the same they weren’t quite tarts, but they were being half kept. And then it would tail off into the queer, almost criminal world – lesbians dressed as admirals, you know, that sort of thing.’

About writing for money. ‘Ian Fleming did. I remember him telling me years ago that he was going to write a bestseller, and he did. But on the whole I don’t think it’s any good worrying about the money if one’s going to write.’

About having know-how and inside information: ‘The thing is, writing is this odd, indefinable thing called art, and it takes an artist to make sense of the material available. I mean, if you want someone to write about sex you’d do better to ask some hack writer rather than someone who’s had it, if you see what I mean.’

He appeared genuinely interested in apparently trivial items of information. ‘Oh really? How fascinating that you should live in Prince of Wales Drive. Almost everyone one meets seems to have lived there at one time or another. Which Mansions are you?’

It was only as I drove off that I realised he had barely mentioned his own novels, let alone the one I had come to interview him about. He had totally disarmed me, and left me worryingly short-changed.

The next day I telephoned him to say I didn’t think either of us had done ourselves justice as far as his new book was concerned. ‘Oh do you think so?’ he said. ‘Come down again as soon as you like and we’ll fill in the gaps.’ Which I did. The conversation was similarly entertaining, but the wine was just as ordinaire.