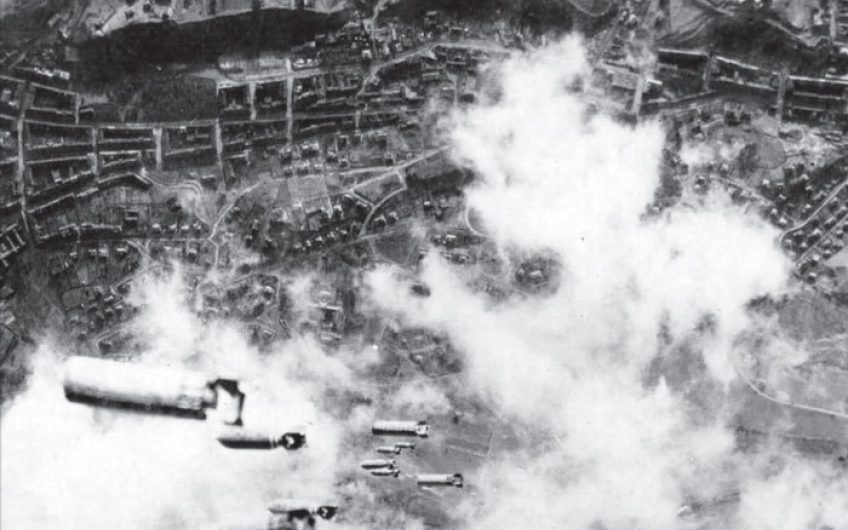 Seventy-five years ago, nearly 800 British and American bombers took off on their mission to Dresden. In 18 hours, the magnificent buildings of the ‘Florence of the Elbe’ were turned to rubble and reduced to ashes by a firestorm of unimaginable brutality. Some 25,000 people – most Dresdners, but also many refugees fleeing the advancing Soviet forces – died in the inferno.

Sinclair McKay’s timely account, Dresden: The Fire and the Darkness, charts the story of the city and the people who lived through the ordeal.

Who to blame? The question hangs over the book like a sword of Damocles without a solid answer. The narrative is almost too balanced in its lack of an answer. The ‘dehousing’ policy of Lord Cherwell and Bomber Harris suggests Bomber Command. The lack of purpose-built air-raid shelters suggests the blame should lie with local officials. And – an unexpected approach – the view of some Dresdners that Germany brought it on itself – ‘Germany started a fire that travelled round the world only to hit Germany’ – suggests countrywide complicity.

The question from the Allied perspective comes down to ends and means. Do the means justify the ends?

But what were the ends. Bomber Command was convinced that it would prompt a rebellion against the Nazis and cause panic and confusion, undermining the civil authority’s abillty to house the now homeless refugees. The United States Army Air Force who principally bombed by day – and at strategic targets – aimed to cripple infrastructure. Neither of these aims was achieved in any meaningful sense.

Dresden’s authorities, like Hamburg’s before it (Hamburg was similarly bombed in 1943 in Operation Gomorrah), worked with remarkable efficiency. In spite of the total absence of any of the city’s Golden Pheasants – high ranking Nazi officials, so named for their gold braid uniforms – the dehoused were found temporary digs and the trains were soon up and running – if not through the city, certainly around it. So no moral justification there…

The quandary is well summarised by one of the young scientists at Bomber Command, a Freeman Dyson, who throughout the war found himself retreating from moral backstop to moral backstop. Non-violence against Hitler didn’t work, but ‘I am still opposed to bombing’. But bombing is still necessary to end the war, just not against cities. But it would help to win the war! By 1945, he ‘could no longer find any excuses’.

The risk with Dresden, is to look at it as a one-off. Because it is twinned with Coventry it is easy to forget that Dresden was just one of many cities – Hamburg, Essen, Pforzheim – a quarter of whose population died in the space of a few hours – that got this treatment. Britain and Germany did not suffer bombing to the same extent.

Perhaps most telling is the planned – but never executed – Operation Thunderclap. The plan was to target governmental, cultural and civic symbols in Berlin. There is an astonishing line in the text that explains that it aimed to cause ‘as nearly as possible a 100% risk of death to the individual’ in the areas applied. Not only did it seek to kill but it also sought to break the sense of identity of the city.

As McKay observes, the plan implies that Nazism was at the heart of the German people and could be rooted out only by absolute annihilation.

McKay is rightly keen to show that this was not the case. He shows how the people resisted the regime. Shopkeepers gave members of Dresden’s rapidly diminishing Jewish population extra rations. And the choirmaster of Dresden’s world-renowned Kreuzchor, Rudolf Mauersberger, when his charges were ordered to tour Germany in their Hitler Youth uniforms, brought their regular clothes, so that they could travel as choristers rather than Nazis.

This is where McKay’s careful construction of Dresden’s character comes into its own. The cosmopolitan artistic influences, the inquisitive scientists, the love of opera, flambuoyant circus and Baroque architecture speak of a people and a culture comparable to any of Europe’s ancient capitals.

It’s very easy for social history to be claggy. At points the excess and repetition of detail weighs down the narrative. Adding to this frustration are occasional phrases like ‘latticed with instability’ that I found grating, though mercifully infrequent.

The social approach comes into its own during the description of the bombing. A painfully telling example of this is when a young boy, stranded with a friend’s family, starts to panic as he sees the inferno that engulfs the part of the city where his family lives.

Ending on a note of remembrance, McKay draws attention to the recovery of the city, and a reminder of the horrors of war. But we must not forget that it was the Allies who ‘opened the gates of hell’. Let’s try and remember it the next time we hear talk of airstrikes in the Commons…