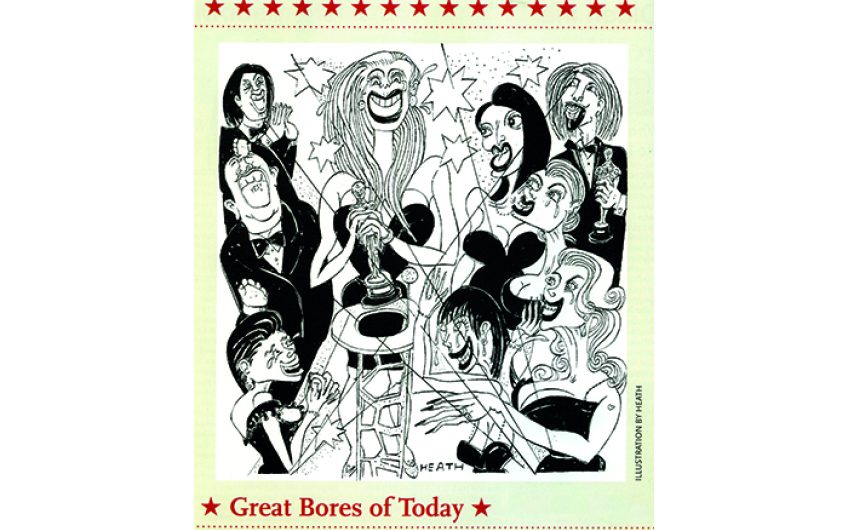 No longer confined by COVID, they’re back – and they’re coming to get you. A bore-spotter’s guide by James Pembroke

All bores are boring but not all boring people are bores.

There are plenty of innocent folk who like nothing more than to share their anxieties about the village fête with you – and they’ll do it for 20 minutes you’ll never get back.

Yet these are just ‘sweetie bores’, as Jennifer Paterson, one of the Fat Ladies and The Oldie’s erstwhile food writer, dubbed them. Their reliance on platitudinous observations has been immortalised in Robert Thompson’s Oldie cartoon, set in a typical suburban sitting room. The mandatory grotesque wife with her packed suitcase is screeching at her diminutive husband, who is pulling back the curtain to look up at the sky.

Wife: ‘I’m leaving you because you’re so BORING!’

Husband: ‘At least you’ve got a nice day for it.’

Now that we are allowed to socialise again in the confines of a rammed sitting room, here’s a quick reminder of the horror that is the boorish bore – those men (and 95 per cent of them are men) who pin you to a wall. Like me, you too will be so excited by the prospect of having a glass of warm Chilean Sauvignon Blanc indoors that you will have forgotten just what damage these people can inflict on an otherwise enchanted evening. We all know one. What are their shameless traits?

A boring job shouldn’t act as an early-warning system. Among 120 alumni attending a recent university reunion, it was widely agreed that Aidan the actuary was by far the most entertaining and simpatico of all of us. Why? Because while all the bores were laying down hints about their wealth and success, Aidan was having none of it. He was proud to be on £16,000 a year and had long since realised life was best enjoyed by those who treated it as an ill-conceived farce. So a complete absence of self-deprecation is a giveaway.

The bore’s natural habitat is the dinner party; at a drinks party, they have learned, their prey can scarper. ‘Just going to get a refill,’ we cry, having bolted a jug-like glass in under three seconds.

Up there with childbirth is women’s other great sacrifice: that of indulging the bore at dinner while we men abandon them to their fate. A dear old friend told me once, ‘As a woman, you’ve just got to sit there and take it. One’s only hope is to let them talk about their favourite subject. I recently asked the man next to me about the origins of his signet ring. That way, there’s a chance they might appear animated.’

There lies the rub: bores have no sense of timing or delivery. If you were to ask Gyles Brandreth to read Yellow Pages, you would quickly find yourself enraptured by the names and attributes of plumbers in Dorking. Yet, in spite of their obvious failings as after-dinner speakers, bores like nothing more than holding a table in the vice of their favourite yarn. Cave raconteur!

Many of us are in our anecdotage and we can be forgiven if we inflict stories on small numbers. But bores have a complete lack of sensitivity to the make-up of their audience. They arrogantly think one story fits all and can brook no interruption. They are garrulous to the nth degree.

But never give up. You must interrupt. Heckle away and, lo, other bore-escapers will help you drown the bore out.

Bores love the soundtrack of their own voice. That’s why they avoid the foundation of all conversation: they never ask a question. How difficult is that? What loss of self-esteem would they suffer if they agreed to use even the royals’ alleged favourite gambit: ‘Have you come far?’

For me, the most dangerous arrival on the bore scene has been the woke generation. Whether or not you’re sympathetic with some of their denunciations, they are in a class of their own. Their drone-like mentality and lack of original thought scares them into accepting any discussion of their faith. They are as blind to reason as flat-Earthers and Baconians, hellbent on denying the genius of the Stratford bard.

This lack of spark and originality afflicts all bores, from raconteur to latter-day JCR presidents – strangers to the twin pillars of good conversation: cynicism and sarcasm.

Be careful out there. There have been no bores for two years – now they’ll all turn up at once.