Joy of The Mousetrap by Madeline Smith 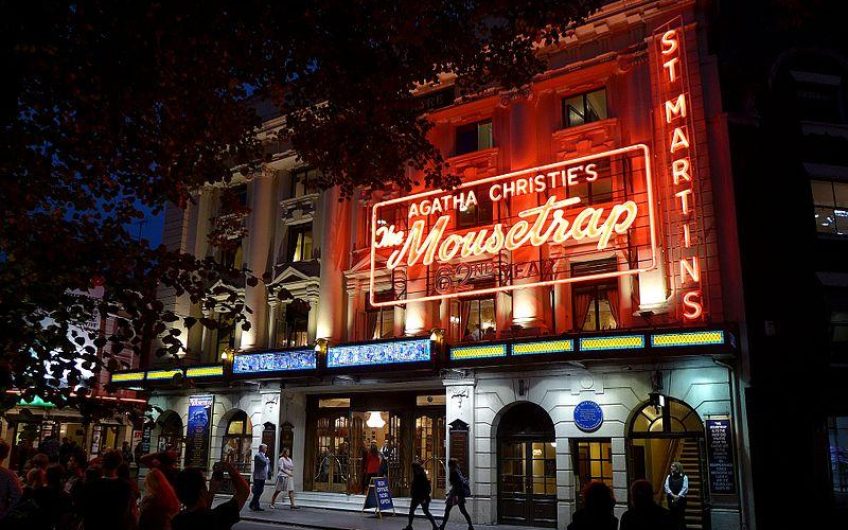 Agatha Christie’s The Mousetrap, which opened today in 1952, is very old. Nearly as old as I am.

After a COVID-induced break, it’s returning, thank God, to St Martin’s Theatre in the West End.

Its return takes me back to a chill November day in 1989. That’s when I auditioned for the part of ingénue

Mousetrap is Cluedo on Stage.

Ill-assorted, unpleasant characters are thrown together in a creepy guesthouse. United together against their will by a snowfall, their emotional lives are laid bare to the audience, and there ensues murder most foul. My character, Molly, is an innocent, with a husband scarcely more knowing than herself. Together they mismanage Monkwell Manor, the grim guesthouse.

My Mousetrap stage husband Giles Ralston was played by a handsome American, David Evans, fresh out of drama school.

One night I noticed that David looked most peculiar. His face was beetroot and looked as though it was boiling over. In our key scene together, I was busy accusing him of scuttling off to London , evidenced by my finding a copy of The London Evening Standard in his pocket. As I threw down the newspaper onto the table, shouting, 'I KNOW you are lying!', a weeping David cradled himself into the plaster mantelpiece and started declaiming speeches from Hamlet, crying out for his imaginary lost love, Helena Bonham Carter, who had once played Ophelia.

Paul was very evidently raving, poor chap. With no choice, I left him whimpering on stage, and dashed into the wings, softly crying 'HELP!'

The company manager should have responded by bringing down the curtain on proceedings. Instead, he flapped his long arms, said 'Don't bother me now!' and disappeared into Dressing Room Number One. There, Pamela Lane, former first wife of playwright John Osborne, was always waiting with a chilled bottle of Chardonnay. Her character had met an untimely end; so her second half was spent joyfuĺly inebriated.

Now in despair I called my elderly friend, the late Paul Imbusch, from his second-floor room. Paul was always bad-tempered before the show but, by now, his foul mood had dissipated and he was game to have fun. He relished his role as the Mousetrap’s red herring, Mr Paravacini. Our verbal spats were loud but apologies came in the shape of cream cakes and port – good for the throat, of course.

On that night, Paul and I invented some extraordinary dialogue, until the curtain was, thank God, finally brought down.

David, meanwhile, had said goodnight to a very surprised stage-door lady, picked up his car and driven to Wormwood Scrubs Prison, where he left the vehicle and wandered the streets.

He was found, incarcerated, given electric shock treatment, and returned to The Mousetrap exactly one month later, as though nothing had happened.

The tedious, under-written part of The Major was played by Nicholas Smith, well-known for his role as Mr Rumbold in Are You Being Served?

Nicholas had a very big belly and a passion for taking his clothes off. He wandered among the dressing rooms between the shows on matinee days in only his underpants. He was a lovely chap but, virtually nude, was not a pretty sight.

When he came to my tiny, third-floor dressing room, Paul told him to 'Stop playing with Madeline while you are in a state of undress!'

Cheryl Kennedy is a beautiful and very gifted actress. Her performance as complex Miss Casewell was subtle and understated. Off-stage, she is a devoted wife and mother with a gloriously waspish mother-in-law, the late actress Kathleen Byron.

Cheryl and I had adjoining doll’s-house-sized dressing rooms. The poor chap with all the lines, who played the policeman, was at the end of our corridor.

They both used to scurry home the moment it was curtain-down. But I am an oddity, and loved to stay awhile and just imbibe the atmosphere of the quiet theatre. I also enjoyed the peace without all the jolly chat. A great way to wind down.

One day, I was very, very bad. I locked poor Cheryl in her dressing room. Not for long, I promise, and afterwards we embraced and laughed a lot. Still on my shelves today is a brilliant book, Women at War, which Cheryl gave me on our last day together in The Mousetrap.

Yes, it was a very good year.