Return to Innisfree - John Stoker on The Quiet Man 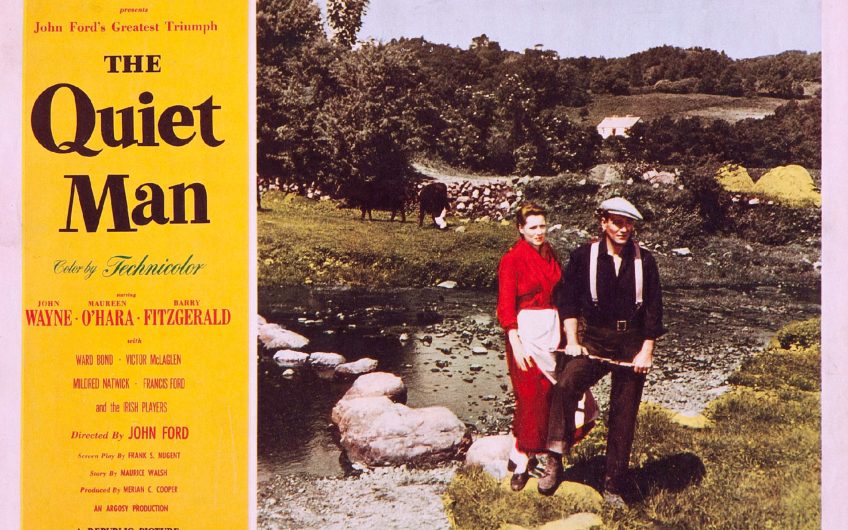 When I was six years old, my big treat on a Saturday night in Sunderland was to be taken to the cinema by my grandmother and her two friends.

The ladies viewed a wide variety of films but they particularly enjoyed those staring John Wayne and being thrifty with their cash they always waited till his latest offering arrived at a small cinema called The Roker. So on a summer night in 1952 we settled down to view The Quiet Man, the story of an ex-prize-fighter returning from America to his Irish roots in the town of Innisfree where he finds a feisty Coleen and has to literally fight for her affections and her dowry.

The movie had everything: there was comedy, action and romance with a cast of characters beautifully played by seasoned actors. My grandmother and her friends loved it and as we left the cinema she said “That film made me feel warm!” Many decades later, director Martin Scorsese would describe it in exactly the same way. The Quiet Man was one of the biggest money-spinners of the fifties but it had taken director John Ford many years to bring his most personal project to fruition.

Ford was born into an Irish family in Maine and followed his brother Francis to Hollywood in the hopes of finding a job in the movie industry. That job turned into a career and he became a much admired director. He was mainly known for westerns many of which were filmed in Monument Valley and his vision of the west rapidly became ours. But he had another vision that he wanted to share with us: it was his vision of Ireland. I knew nothing about the country and the ladies with me knew little more so John Ford had a blank canvas to paint on.

Ford had bought the screen rights to a story by Irish writer Maurice Walsh for a mere $10 and set about trying to sell it to a Hollywood studio, but there were no takers. No one wanted “a silly little Irish story” and he had nearly given up. But by 1950 John Wayne, whose career had been sparked by Ford giving him a key role in Stagecoach, asked if he could offer the project to Herbert Yates, the head of Republic Pictures. The studio’s major output was westerns and John Ford was the most famous director working in the genre. Yates didn’t like The Quiet Man but was willing to set it up if Ford would make a successful western for him. Ford shot Rio Grande with John Wayne in the lead and the box office was happy.

But Herbert Yates had no confidence in The Quiet Man and only hoped that he could claw some of the $1,750,000 budget back so he made demands. He wanted Ford to use the Trucolor system which the company owned. Trucolor was a misnomer if ever there was one and Ford demanded to shoot in the much superior but more expensive Technicolor. Ford won that battle but the war wasn’t over. Yates then demanded that the project was not to go a cent over the agreed budget and the running time was not to exceed a second over two hours.

Ford had little respect for studio executives and regarded them as an irritation. “Haven’t you got an office to go to?” he had once told a producer who had had the temerity to visit his set. On another occasion he had been told that he was a day behind schedule so he tore two pages out of the script and announced that he was back on time. Yates would stay in Hollywood for the duration of the Irish shoot but was still determined to keep an eye on Ford.

In the summer of 1951 Hollywood descended on the village of Cong in County Mayo and John Wayne, Maureen O’Hara, Victor McLaglen and Barry Fitzgerald mingled with the locals and filming began. There were a few problems: John Wayne had difficulty riding with a hunting saddle and a western replacement had to be sent from America. The Catholic Church was used for interior shots while the exteriors were provided by the nearby Church of Ireland whose Protestant parishioners were not happy to see a font containing holy water outside their place of worship. Ford didn’t see the problem with “the Catholics who flunked Latin” but he went to see their bishop to straighten matters out.

Herbert Yates was still getting daily reports and viewed some of the footage sent back to the studio complaining that it was “all green.” He was also not happy with the title and beginning to doubt if he would ever see his money back.

When the cast returned to the States shooting began on interiors at the Republic studios after which Ford began to assemble the movie. Yates still demanded a running time of two hours, but after a tough editing process it still ran nine minutes over. Yates warned Ford that if he didn’t cut it to the required length he would do it himself in the firm belief that no cinema would want a movie that long. The director returned to the cutting room.

A few weeks later Yates organised a viewing for a group of exhibitors having been assured by Ford that the movie was now down to two hours. But as the film rolled on Yates couldn’t see that any cuts had been made. Finally it reached the two hour deadline and the screen went blank as the final fight between Wayne and McLaglen began. The viewing theatre was in uproar: the audience just wanted to know how it ended. Yates turned to Ford for an explanation and the director merely told him that he couldn’t reduce the running time any further so he just decided to end it there. The exhibitors yelled their annoyance and Ford signalled for the projector to start up again. The missing footage hit the screen and the audience loved it. Yates was forced to agree. Some of the audience came out humming the music which a Republic executive thought was a good sign.

Victor Young had devised a score which featured many Irish themes which delighted Ford who was asked why there was so much music in his movies. “I’d rather hear good music than bad dialogue,” was his quick reply.

Herbert Yates couldn’t believe his luck when The Quiet Man picked up Academy Awards for best photography and best director. It was Ford’s fourth Oscar. The movie was a worldwide hit and in Sunderland the three ladies were so impressed that two weeks later they took me to another local cinema, The Marina, and we enjoyed it all over again.

Perhaps the greatest tribute to the movie is not its addition to the Library of Congress film collection but the village of Cong itself which now boasts not only a Quiet Man museum and a statue of John Wayne carrying Maureen O’Hara but guided tours of the locations. Eager tourists flock there every year. Seventy years ago the exterior of a local shop was transformed into Pat Cohan’s bar for the movie and during the filming visitors would attempt to buy drinks. Now the transformation is complete and tourists can at last satisfy their thirst as it really is a pub boasting a copy of the original sign. John Ford’s vision of Ireland has become a reality. He would have loved it.

Oldie news hot off the press: A trip to bank on