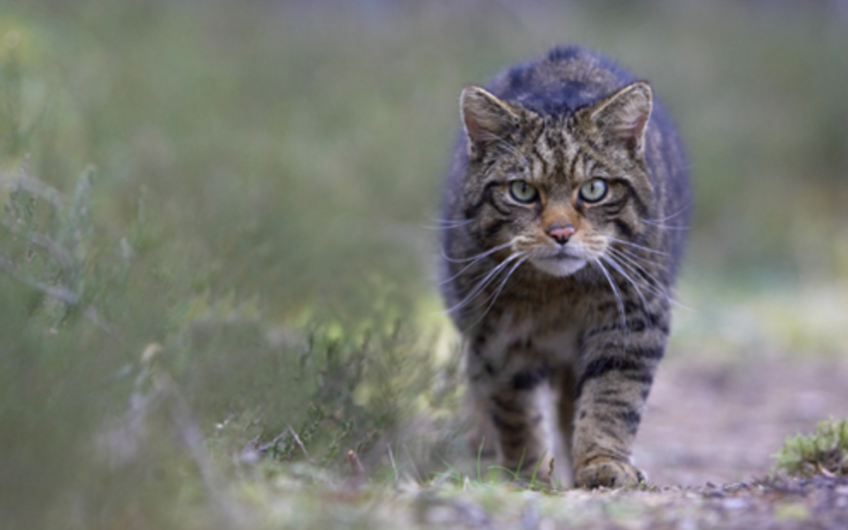 My father was passionate about the countryside. When I was a child, we would fish together, standing knee-deep in the river, theoretically looking for the rising trout upstream, but mostly, in my memory, studying what was going on around us on the banks and under the water. I learned a lot without knowing I was learning: the life cycle of the mayfly, the breeding habits of garden robins, where to find slow worms and how to keep wood lice in a jar. On hot summer evenings, we’d camp out near badger setts to witness the near miracle of watching a group of cubs rough and tumble in the moonlight.

Since those days I’ve been on wonderful safaris in Africa but I’ve always wondered why we didn’t have them in Britain. Our wildlife might be smaller but it’s just as fascinating. So I was very curious when I climbed into Charlie Burrell’s open-sided Austrian army troop carrier, for a West Sussex safari.

Charlie and his wife Issy own Knepp Castle, where, until 2000, they struggled to make their 3,500 acres pay in conventional ways: every inch of their heavy clay soil was ploughed up and intensively planted with maize, wheat, peas, beans, barley, oats and short-term grass lays for cattle; insecticides, fungicides and herbicides were liberally applied.

They were spending a fortune and not making much back and they were miserable: it wasn’t that the Burrells were bad farmers (their herds were consistently in the top ten in the country) but that their soil was totally unsuitable to this kind of agriculture. They wondered what to do and found the unlikely answer on a trip to the Oostvaardersplassen in Holland. There the Dutch have reclaimed 6,000 acres of land, literally from the seabed. The results have been astounding. Spoonbills, vultures, bearded tits, bitterns and white-tailed eagles have made it their home and it has led to the birth of the European ‘rewilding movement'.

Rewilders would like to see the mass restoration of eco systems on land and sea and up to fifteen ‘lost’ species – such as the beaver, common crane, eagle owl, pine marten, wild boar, lynx and grey whale – returned to the British Isles. We are all very familiar with the woes of farming: so why not use economically marginal land to bring back threatened biodiversity and support disappearing species?

The Burrells were convinced and, from 2000, they began to withdraw from farming and let the land return to – well, what exactly? Charlie takes up the story: ‘If you do nothing, and have no grazing animals, eventually it will all become woodland. With help from the Dutch, we’ve worked out that land needs grazing, browsing, rootling and trampling – the activities that animals get up to and that our ecology has evolved with. This creates a mixed landscape: woods, pasture, open grassland, thorny scrub. This is where life thrives the most – in the margins.’

Study of the cave paintings in southern France helped identify the animals that would have roamed centuries ago. Some are extinct, like the auroch, but old English Longhorn cattle have stepped into their ancient hooves. The Exmoor pony – a rusty colour – is the most strikingly similar to the small horses seen in the paintings. Tamworth pigs stand in for wild boars. Fallow deer and red deer complete Knepp’s Big Five.

We bumped along rutted tracks, passing thick overgrown hedges where so many nightingales have started nesting that Knepp now boasts two per cent of the UK’s entire population. We drove through a dense grove of sallow, where the elusive Purple Emperor butterflies now breed in profusion, pausing to watch the caterpillars munching away at the leaves. We climbed a beautifully made wooden platform which circled an ancient oak and looked over a complex landscape of scrub and grassland, dotted with clumps of dog-rose, hawthorn, blackthorn and brambles.

We drove past the lake where in the summer you can see Daubentons and pipistrelle bats swoop across the water as night descends. From another platform, we watched a herd of Exmoor ponies canter into view. We saw a herd of Longhorn cattle quietly grazing. The silence was broken by the grunting and squealing of a couple of russet-coloured Tamworth pigs, who started cheerfully rootling in the grass, looking for roots and worms and in the process, churning up the earth, providing opportunity for annuals, while the clods of turf they’re tossing aside will soon be colonised by beetles and ants.

Finally, we went looking for the deer – big herds of red deer, fallow deer and some roe. Magnificent fallow bucks, with huge palmated antlers stood silently under trees. Elsewhere we found a red stag deer with a thirty-point antler, guarding his harem.

A few days before going to Knepp I’d read that The Oxford Junior Dictionary had removed, among others, the following words from its pages: acorn, adder, ash, beech, bluebell, buttercup, conker, dandelion, fern, hazel, heron, otter, willow. They’ve replaced them with such urgent new entries as attachment, broadband and celebrity. The editors claim that they are responding to the times, but I find this profoundly depressing: children are being pushed yet further away from the magic that is under our noses.

Knepp runs safaris all through the year – bats, insects, butterflies, moths, nightingales, deer, plant life. They have wonderful experts to tell you all about it. You can go for the day, for the evening or you can camp overnight in a fabulous bell tent or shepherd’s hut. I cannot think of a nicer or better trip to take your grandchildren (over 12) on – or just yourself.