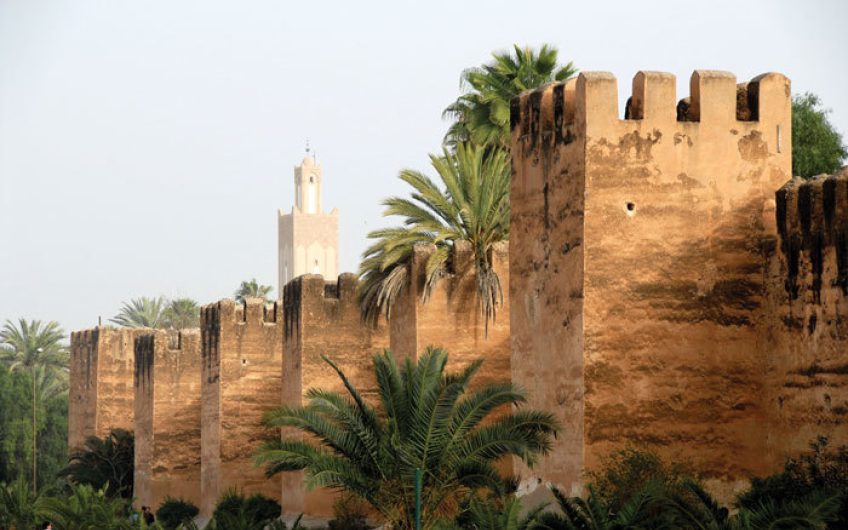 Taroudant, a sleepy Moroccan town built on the plains beneath the High Atlas, may only be one hour south-west of Agadir, but it’s 30 years behind in urban development. Here people dress in traditional djellabas and the donkeys and camels carry goods rather than tourists. Life revolves around a souk where live chickens scrabble at the butcher’s feet, cagefuls of tortoises and chameleons are sold as garden pets, strange roots promise miraculous cures and men, behind cramped stalls, look out over piles of vegetables, coloured spices, leather goods and household items.

How many countries can you name that offer skiing and swimming, gentle plains and dramatic mountains? Morocco has the otherness of Africa with the remnants of French colonialism – their language, pastries and baguettes.

In Morocco, style and comfort are easily achievable on a budget. We enlisted the help of Prestige Holidays, who offer tantalising choices of hotels and tours to fit your price and time range. This is travelling made easy: all we had to do was make the flight.

Our first stop was Taroudant’s Palais Salaam hotel, a former pasha’s palace remodelled by the French and built into the city’s walls. By far the nicest rooms, with high ceilings and thick tiled walls, are in the old section and there can be few greater pleasures than swimming in a pool overhung by palms, magnolia, bougainvillea, plumbago and jacaranda. Although the Palais Salaam is popular with groups, there are still enough places to hide from bumptious French tourists.

The hotel is let down by its pretty ordinary food, but there are many excellent small places in town. For an exceptional treat, order a couscous in advance from Riad Miriam, an unpretentious guesthouse hidden away down some tiny alleys just a few hundred metres from Place Assarag, the town’s bustling main square. Imagine aubergines stuffed with roasted vegetables, thick fish soup, crisp Moroccan salad and, to finish, the lightest couscous imaginable garnished with tender lamb, carrots and herbs.

Those with a head for heights must take the Tizn’Test pass to Marrakech. This road snakes up and over the High Atlas and, for the first 20 kilometres, the verges are full of wild lavender, euphorbia and buttercup. These ebb away with altitude and at the top only the hardiest plants survive. On the northern side, the distant mountains are snow-capped and every twenty miles the fertile plains are punctuated by fortified towns built on high rocky outcrops. Near Idni, the spectacular Tin Mal Mosque, built in the 12th century, is a great stark reminder of Morocco’s former glory days.

Until recently, Marrakech was an exotic and unusual location beloved by artists and grand hippies. Now eight daily flights arrive from England alone and the streets are full of tourists anxiously studying maps and guidebooks. Winston Churchill might have loved the Mamounia Hotel, but the Medina (the Old Town) is now the place to stay. Top choice are the riads, the term given to grand two-storeyed courtyard buildings epitomizing the best of Islamic architecture and providing astonishingly effective protection against the extremes of the summer heat and the chaotic noise of the streets. Left to decay by Marrakechis, who prefer life in the spacious suburbs, many riads are now being refurbished as delightful small hotels.

Of the 400 or so that have been transformed this way, one of the finest is Riad Kniza, which has been in the Bouskri family for many generations. Beautifully restored, this little jewel is a testament to Moroccan talent. Determined to use local materials and ancient crafts, the Bouskris can share responsibility for the resurgence in both skill and interest in local techniques.

Breakfast is taken on the roof looking over the rooftops of the city towards the towering Koutabia minaret, built in the 12th century by Yacoub el Mansour, one of the sultans who transformed Marrakech from a trading city at the end of the Sahara’s camel routes into the capital of the western Islamic world, which stretched from Tunisia to Toledo. In the distance the snow-covered Atlas Mountains are visible through shimmering heat.

Prestige’s guide, Omer, first came to Marrakech aged nine, when his father made the annual trip from his Berber village to the city by donkey and bus to exchange honey and dates for tea and medicine. Weaving in and out of the souk’s countless alleyways, Omer explained the complicated and long-established guild system, which still keeps the ironworkers, leather workers, weavers, dyers – and even the mobile phone sellers – all working in harmony. We explored an ancient caravanserai used by the camel drivers until the 1950s and wandered around the old spice market, a little square reserved, during the holy month of Ramadan, exclusively for women to entertain each other.

Heading back, we passed through the old Jewish quarter with its balconies that look for all the world as if they’ve been taken from the Albycin in Granada – which, in a way, they have been, since they were built by Jews thrown out of Spain by Ferdinand and Isabella. Omer knocked on a tiny door and it opened into a synagogue. A proud rabbi appeared explaining that his flock still numbers over 200.

Waiting in line for the flight home, we exchanged stories with fellow travellers. A French group had quad-biked in the Atlas Mountains. Eight Mancunians had done the ‘Oasis Tour’ in a minibus and breathlessly relayed stories of flash floods and dangerous river crossings. The Worcester Water Colour Club achieved their finest work in the souk and one couple never left the poolside, preferring the company of books to the world outside. Seven days is enough to get a glimpse of a country, but a lifetime of holidays, one suspects, would still leave room for more of Morocco.