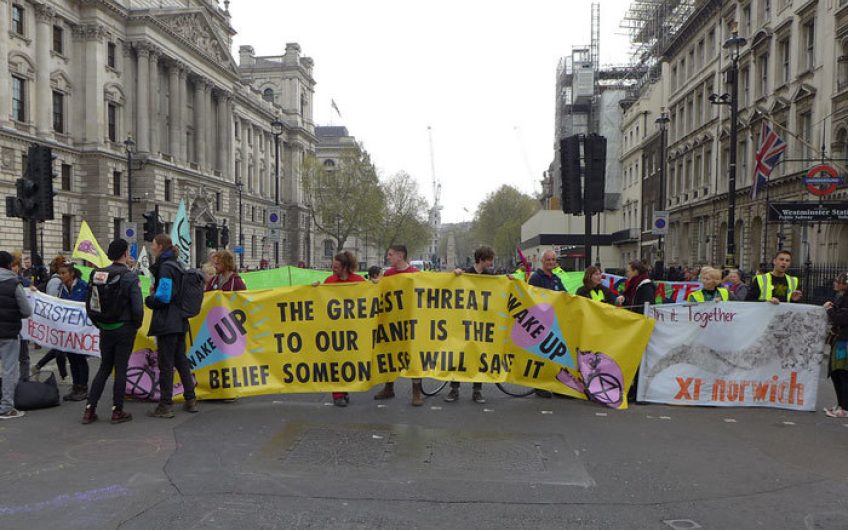 "Exctinction Rebellion Demonstration" by ChiralJon is licensed under CC BY 2.0
View Full Size
1
of 1

Ferdie Rous, 24, is all for green issues. He just can't stand the yoga enthusiasts who are bringing London to a halt to promote their cause

And they’re back! The trust-fund hippies who live with their parents in the five-bedroom semi-detached are back, clogging up London with their silly clothes, their ill-functioning protest vehicles, their bizarrely coloured hair and – worst of all – a painfully deflating sense of purpose and righteousness.

Extinction Rebellion are on the warpath, again, and we Londoners are just going to have to grumpily weather the storm.

The week of occupation in April was exasperating. But at least it was novel. It’s not every day that you get to see a pink boat parked on Oxford Circus. Was the boat a coded message about rising sea levels or just something fun to put the speakers and the DJ in? I don’t know and, at this point, I am far beyond caring.

I spoke to a few of these self-professed rebels during the earlier occupation and what I noticed was that behind the façade and the broad message of ‘planet = good, cars = bad’, most don’t really know what they’re talking about. You can’t really be shocked, but it is really another refrain of ‘Something must be done’. Not particularly inspiring, fairly unoriginal and very confused. Moral highground has more weight than anything else these days.

Newsflash. As I write, word has arrived in the office of Extinction Rebellion’s yoga class on Westminster Bridge. An odd phenomenon? The chances of finding inner peace on a crowded bridge in London in October, while being filmed, are slim at best. So, like the rest of this appalling stunt, it is for show! These would-be yogis are literally broadcasting themselves to the world in a show of hysterical self-indulgence.

But it isn’t the views, the demands or even the members of the movement, that makes me want to slam my face over and over again into a brick wall. It is the self-righteousness of it all!

Now I’m just bored of it: the debates, the celebrity grandstanding (especially that little hiccup with Elton John paying off Prince Harry's environmental debt – not sure that’s how it works, Elton!) and my peers – and occasionally my colleagues – all trying to outwoke each other. This only lasts until they all realise that I find their beloved Thunberg more than a little tedious and just a touch messianic and they all round on me for having the temerity to disagree with them.

But notice that this has nothing to do with my opinion of climate change but who is spouting it: teenagers who’d be better served by actually going to school, royals who should know better than trying to take the moral high ground, and celebrities desperate to find any way to be relevant. The crowd that make up the protestors is diverse, most notably in terms of age. But the old excuse their presence by saying that they are so sorry that their generation destroyed the world for the young. It's pathetic and cringingly sycophantic to millennials, who have no need to be told how special they are.

I am actually totally on board with us making an effort for the environment. I just don’t think that having a very public strop about it, while partying into the night, is a particularly effective way of achieving anything, let alone ‘change’.