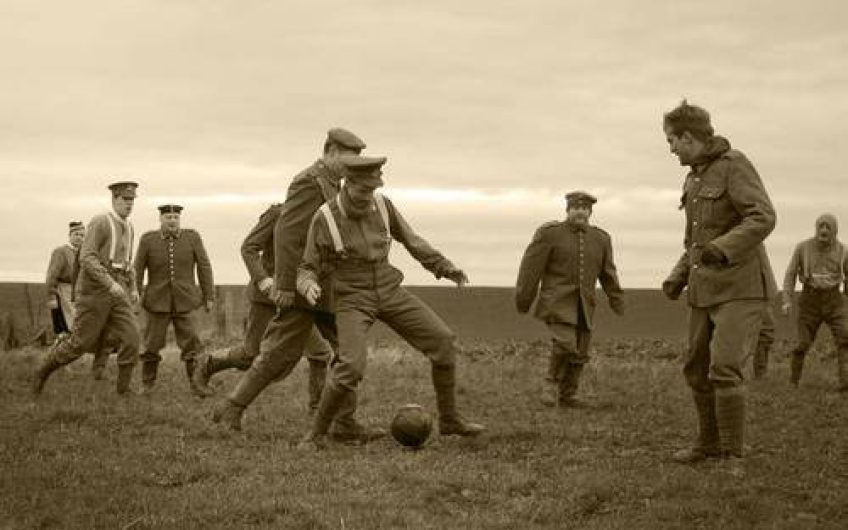 A few years ago, I fulfilled a lifelong ambition when I finally made my way to Plooegsteert (or Plugstreet, as the British Tommies came to call it).

It’s such an easy place to get to – I don’t know why I didn’t go before. It’s in Belgium but only just, hard up against the French border. Catch the Eurostar to Lille (less than 90 minutes from London) and it’s a 30 minute drive away.

Plooegsteert is a sleepy place, like so many frontier towns in Flanders. When the sun shines, it looks quaint and pretty. When the weather’s foul, which it often is (the Flemings share the best and worst of our temperamental British climate) it looks grim and desolate.

Yet the reason I’d come here wasn’t to see the town, but to wander round the windswept fields beyond it, for it was here, on Christmas Day in 1914, that German and British soldiers played the most wonderful, awful football match in the history of the game.

The British held Plooegsteert throughout the war, save for a few weeks in 1918, when the Germans took it and lost it again, in their last vainglorious advance. Throughout the war it was on the front line between German-occupied Belgium and Allied-controlled France. If the Germans could take Plugstreet, the route to Paris lay wide open. If the British could break out of this salient, they could push the Germans back towards Brussels.

Yet by Christmas 1914 it was already clear there would be no quick or easy victory, for either side. Trench warfare favoured defensive forces, and stacked the odds against the attacker. A few machine guns could halt a mass infantry advance. The giddy optimism of the previous summer had been replaced by weary fatalism. The war would not be over by Christmas after all.

The Christmas Day Truce of 1914 was entirely spontaneous, a scattered array of unofficial ceasefires arranged by individual soldiers in the field. Along large stretches of the Western Front the fighting continued unabated. Hundreds died, less than an ordinary day but still a day of normal bloodshed. Yet in many places soldiers laid down their arms, ventured out into no-man’s land, and befriended men they’d been trying to kill a few hours before.

By all accounts it began as a purely practical arrangement – a chance for both sides to retrieve their injured and bury their dead. The close proximity of the trenches made interaction unavoidable, and stretcher-bearers from either side began swapping chocolate, cigarettes and trinkets. Their comrades clambered up out of the trenches, curious to see what was happening, and soon no-man’s land was full of young men - laughing, joking, having fun.

There were several football games along the Western Front, but the one at Plugstreet is the most well-known. Most were informal kickabouts, but this game was a bit more organised - something approaching a proper match, between the 134th Royal Saxon Regiment and the 2ndArgyll & Sutherland Highlanders (so, strictly speaking Germany v Scotland, rather than Germany v England, as it’s often been reported in the past). The Saxons won 3-2.

‘The British brought a ball from the trenches, and soon a lively game ensued,’ wrote schoolteacher Lieutenant Kurt Zehmisch, of the 134th Saxons, in his diary. ‘How marvellous, how wonderful, yet how strange it was. The British officers felt the same way about it. And so Christmas, that celebration of love, managed to bring together mortal enemies as friends, for a time.’

Visiting Plugstreet a century later, in the bleak midwinter, the first thing that hits you is the cold. I’d only been here an hour and I couldn’t wait to get back inside. Those poor sods were out here for months on end, with no respite, risking death whenever they dared raise their heads out of these waterlogged, rat-infested ditches. A line from Keats’s Eve of St Agnes, forgotten since my distant schooldays, sprang suddenly to mind: ‘He passeth by and his weak sprit fails to think how they may ache in icy hoods and mails.’

The second thing that strikes you is the lack of cover. These fields are as flat as fairways. There’s nowhere to shelter, nowhere to hide. A hundred years later, there are still hardly any trees. To advance across here would have been suicidal. There’s a simple memorial on the spot where that famous football match took place. I wonder how many of the players were still alive four years later. My son makes his living as a footballer. If he hadn’t become a footballer, I think he might have joined the army. Standing here I realise, for the first time, how these two occupations are curiously intertwined.

The Allied and German High Commands knew nothing about these Christmas Day festivities. When the news reached them, in their secluded chateaux, a safe distance from the front, they did their utmost to put a stop to it. In most places things were back to normal by Boxing Day.

‘At 8.30am I fired three shots in the air and put up a flag with “Merry Christmas” on it, and climbed onto the parapet,’ wrote Captain JC Dunn, of the Royal Welch Fusiliers. ‘The German Captain appeared on the parapet - he put up a sheet with “Thank You” on it. We both bowed and saluted and got down into our respective trenches, and he fired two shots in the air, and the war was on again.’