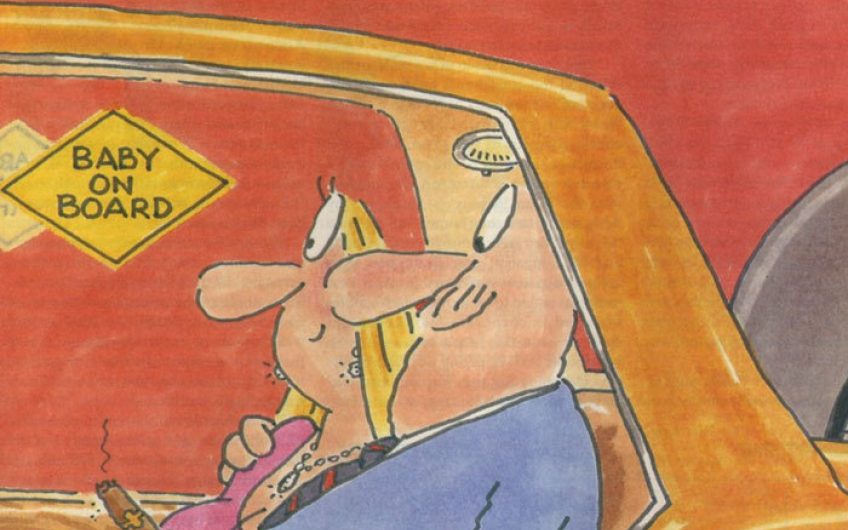 A recent survey in Fortune magazine revealed that the American lords of the financial universe are mostly married to second wives — and they are nearly all up to 30 years younger than their husbands.

It seems that the higher a man flies, the stronger becomes the draw to wrinkle- free, long-legged perfection that only feminine youth can provide. The fruits of success American-style now include not only salaries in telephone numbers, a portrait for the boardroom and access to the company jet, but a trophy wife from Centrefold City as well. Susan Gutfreund, wife of the former Salomon Brothers chief, Marla Maples, second wife-in-wait- ing to Donald Trump; and the lofty Mercedes Kellogg, now the second Mrs Sidney Bass, are all pretty enough to qualify. Dr Frank Pitman of the University of Georgia recently defined the syndrome of the trophy wife. ‘Men who collect trophy wives don’t look for comfort or friendship, support or even a partnership in a marriage,’ writes Dr Pitman. ‘Their wives are as exchangeable and disposable as cars. They are merely status symbols.’

In an age when mistresses have given way to serial marriages, these exquisite tanned, blonde creatures get a wedding- ring as well as access to their paramour’s bank account. What they get out of these men is financial security — all the shopping and holidays they can manage scattered with only tiny inconveniences like entertaining his ageing company of friends and probably retiring to

bed earlier than was their previous custom. The security only lasts, however, as long as their looks. Like Ivana Trump, they are forever vulnerable to the younger model. In their pre-nuptial agreement they would be wise to insist on a large liposuction allowance.

Trophy wives, like the junk-bond kings who espouse them, do not really exist in Britain where successful British men are not only poorer than their American counterparts but still apparently seek those old-fashioned virtues of partnership, friendship and comfort in their second marriages.

But it is instructive to look at some of our high-flyers’ second helping of wife. Second wives often more clearly reflect a man’s aspirations than the first time around when he was in the grip of blind love, when his taste and ambitions, like his career and fortune, were not clearly formed. And a successful man is frankly unlikely to pick his second wife from the same stable as his first. Take, for instance, the marital career of Andrew Lloyd- Webber who moved from music student to diva to settle down en troisiemes noces with a county girl. Madeleine Gurdon is horsey, with a three-day eventing background and a mail-order company selling country clothes. She is evidently more at home in a country mansion complete with stableyard, than backstage at the Phantom amid the greasepaint. Although she is reputed to have formidable social and organisational skills, she is at heart and at home a country wife. Thus the transformation of composer to country squire is complete.

Racehorse-owner Robert Sangster came near to acquiring a trophy wife when he married Susan Lilley, who is as blonde, sleek and shiny as any of his thoroughbred mares. When the first Mrs Sangster hit the scrap-heap it was because Robert had finally met the woman he considered the match to his millions and his jet-bound lifestyle. Ever immaculately dressed and coiffed, Susan looks like a millionaire’s wife. She does not resemble the girl next door, unless you live next door to a health- farm with a Chanel concession. Dominic Lawson, editor of The Spectator, made a revealing choice of second wife. His first, Jane, was an actress, an earnest unsophisticated girl of modest tastes who has gone on the record wondering where the man she married went shortly after he became an editor. Lawson remarried, with full papal service, the Hon Rosamund Monckton, daughter of Lord Monckton of Benchley. An ambitious businesswoman built on generous lines and endowed with a flamboyant dress-sense, Rosamund is a staunch Roman Catholic and has a high social profile altogether more appropriate to this country’s leading right-wing jour- nalJocelyn Stevens, heir to the Hulton fortune, achieved life-membership of the Establishment when he moved in with Vivien Duffield, plump philanthropic daughter of Charles Clore.

Bucking the trend towards youthful female companionship is Conrad Black, proprietor of The Daily Telegraph. After

his first wife Jennifer retreated back to Canada, Mr Black started to escort a glamorous newspaper columnist, ravenhaired Barbara Amiel, who is probably as clever as him and certainly as right-wing. She is, however, older than his wife.

Matthew Evans, managing director of Faber & Faber, was recently remarried to the most glamorous girl in British publishing. Caroline Michel has long been admired for her looks and literary contacts and Evans finds himself with a striking

consort and kindred spirit — which some people achieve first time around.

Older titans of finance who go to the US occasionally fall into the trophy man- trap. Sir Gordon White’s long dalliance with Victoria Tucker, 25, a model 35 years his junior, is a classic. But at least the younger second wives of those who stay here are allowed to age gracefully. Here liposuction does not yet figure in second- marriage settlements.