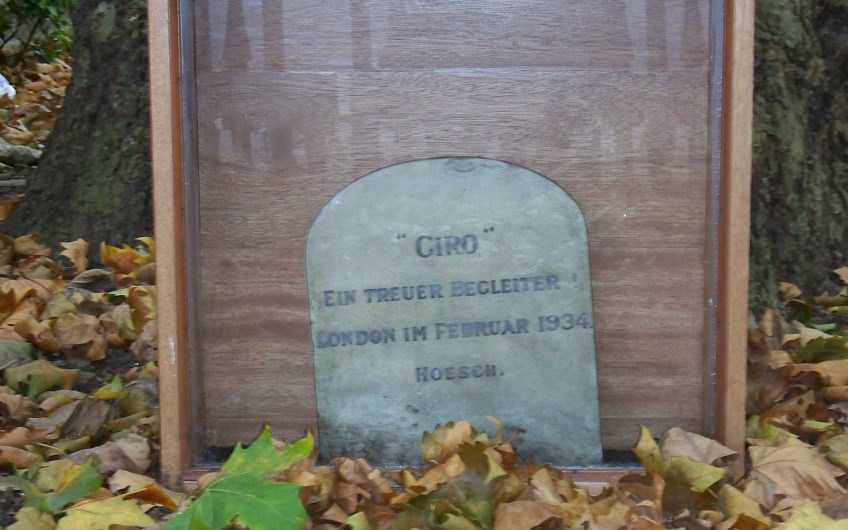 Giro is the only Nazi dog in British soil. Should his tombstone be removed, asks Harry Mount

The oddest tombstone in London sits in the shade of a plane tree at the top of the Duke of York steps by the Mall. It commemorates Giro, the only Nazi dog lying in British soil.

Giro was buried there in 1934. He and his master, the German ambassador, Leopold von Hoesch, had been living next door, at 9, Carlton House Terrace – first the Prussian and, later, the German, Embassy.

I’m not sure if it’s right to feel sympathy for a Nazi dog, but Giro met his sad end when he was electrocuted in the embassy garden by a stray wire. Two years later, his master died of a stroke at only 55. Von Hoesch’s coffin was wrapped in a swastika flag, and greeted on the Duke of York steps by embassy staff with the Nazi raised-arm salute.

Von Hoesch was succeeded as ambassador by the appalling Joachim von Ribbentrop, later Hitler’s foreign minister, eventually hanged for war crimes. The new ambassador promptly got in Hitler’s architect, Albert Speer, to do up the embassy in his trademark totalitarian-classical style. Von Ribbentrop was no diplomat - he got into trouble when he greeted George VI with that Nazi salute and almost knocked him over. Von Ribbentrop’s son used to walk across St James’s Park to Westminster School, where he shared a classroom with Peter Ustinov.

Giro’s gravestone was originally in the garden of the embassy – where it was uprooted after the war by builders, who transferred it to its current resting place.