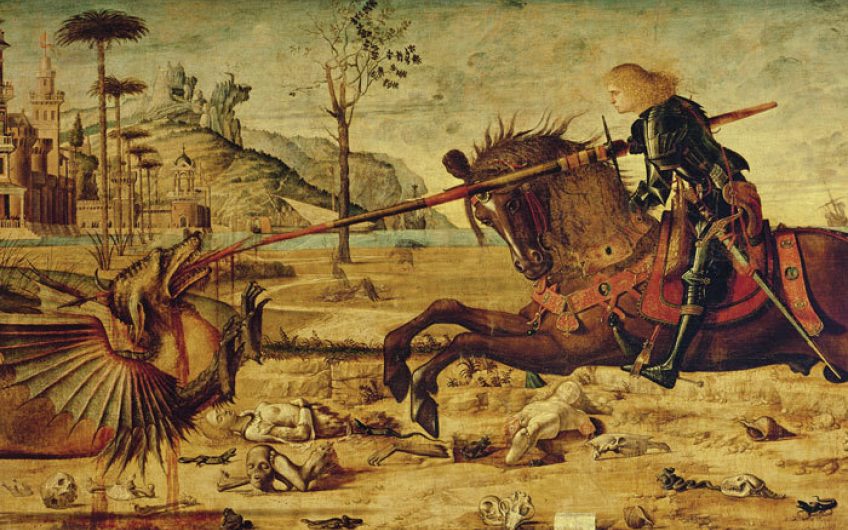 The writer Jan Morris has sadly died at 94. In one of her final books, she wrote of her lifelong passion for the Venetian painter Vittore Carpaccio

I have been toying for years with the prospect of old age, and have repeatedly determined that my next book will be my last. Now, as I stand on the brink of my nineties, I have decided that rather than signing off ponderously, I will go out with a little work that might, in a glancing and lighthearted way, sum up a life’s attitude while the going is good. That life has been one of constant travel, but steadily near the heart of it for seventy years has been the city of Venice, and so I am making of my swan song something quintessentially Venetian.

My responses to that extraordinary place have fluctuated down the years, from my earliest experience of it to reading in the paper the other day about George Clooney’s ultra-Venetian wedding celebrations. Ultra, yes, because for me the fascination of this place has always been extreme – like its history. It is not one of your normal conurbations. It is one of a kind in every sense, and through life I have responded to it as I have responded to nowhere else.

When I first saw it, as a nineteen-year-old subaltern in 1945, I was bewitched by its haunting melancholy. When I went to live there and write a book about it, in 1959, it seemed to me a crystallisation of sparkling delight and good humour. I was depressed when tourism began to rob the old place of its civic reality, and when the four golden Horses of St Mark, on their grand belvedere above the Piazza San Marco, were replaced by lifeless replicas in the cause of preservation. On the other hand, when purists were horrified by the gigantic new cruise ships that came to dominate the city skylines, spilling into its streets new multitudes of tourists, I couldn’t help marvelling at the spectacle of those immense maritime machines gliding tremendously by, a very summation, I preferred to think, of Venice’s immemorial and profitable alliance with the sea.

Through it all I ignored the municipal corruption. I stayed clear of tidal floods. I tried not to notice the vulgarisation of things. For me, Venice has been not only, as Byron had it, ‘a boast, a marvel and a show’, but a kind of unknowing bene-factor, through thick and thin, to whom I would like, in a last capricious book, to say a final thank you.

Fortunately, as it happens, Venice long ago became personified in my mind with one of its artists. Not one of the very greatest, the Titians, the Tintorettos or the Giorgiones who gave Venetian Renaissance art its towering sublimity, but a lesser master of the years before them. Vittore Carpaccio, who died in 1520, is known chiefly to those who have come across his paintings during visits to Venice, or alternatively by those millions around the world who think a carpaccio is an item of cuisine – ‘an Italian hors d’oeuvre’, as the OED has it. It is indeed the artist’s name that is attached to beef carpaccios or octopus carpaccios at restaurants around the world, names given to such dishes in 1970 by the creative owner of Harry’s Bar in Venice, and I think Vittore would have been delighted by these cheerful contributions to his immortality – the instant pleasure of tourists, the approval of gourmands everywhere.

For I think of Carpaccio as a merry, easy-going man. Like my acquaintance with Venice itself, my relationship with him is purely imaginary, and personal. Over the long years I have come to regard him as a friend, my favourite Venetian, personifying for me everything I have so long enjoyed about his city. I don’t know what he looked like – nobody does. I don’t know where he was born, or where he is buried, but I do feel I know him well, and love his company; and so it is that I am calling the very last of all my books Ciao, Carpaccio!, and subtitling it An Infatuation.

It deserves no more – and no less, perhaps! It is only a handsome little book with lots of pictures. It is not the work of a scholar, still less of a connoisseur. It is certainly not a memorial. It is only a writer’s grateful response to a lifetime’s amused familiarity and friendship, across the Venetian centuries.

Critics have sometimes dismissed Carpaccio as a kind of enjoyable light-weight. Even John Ruskin, who was later to become his influential champion, at first thought him merely ‘a kind of magic mirror ... never to be thought of as a responsible person’, and he is chiefly respected still as an illustrator of Venetian life in his own time. But to my mind, though he is certainly not among the supreme artistic interpreters of the human condition, his is a genius of a gentler, subtler kind.

He is a story-teller, for a start. Much of his art is built around three series of narrative pictures, rather like graphic novels or even comic strips, which tell serious religious stories, but are enlivened by every kind of entertaining device and wildly anachronistic detail. He loves children, from urchins to the Messiah, animals and birds from storks to dragons, ships, pomp of all kinds, colours, hats, flowers and brilliantly inventive architecture. He laughs a lot, but with his subjects rather than at them. He presents his Venice as a city of fancy, brightly coloured and inimitable. In short, to my mind he is Ultra-Venezia himself, the greatest of fun and the best of companions.

But he is more than that, too. His holy pictures are profoundly holy, but holy in his own particular way. He seems to me to be the supreme artist of that simple, universal and omnipotent virtue, the quality of Kindness.

So there we are. That’s my last book. I have dedicated it to Harry’s Bar in Venice, chiefly because of the many happy hours I have spent there, but partly because it has made the name of Carpaccio so universally popular: and on the corner of page 111, if ever you chance to thumb your way through Ciao, Capaccio!, you will find a minute neo-Venetian illustration by my granddaughter Begw, aged three, with a big bird on a castle wall, as it might be in a fairy tale.

Long lunches at The Oldie: an extract from Miles Kington's letters