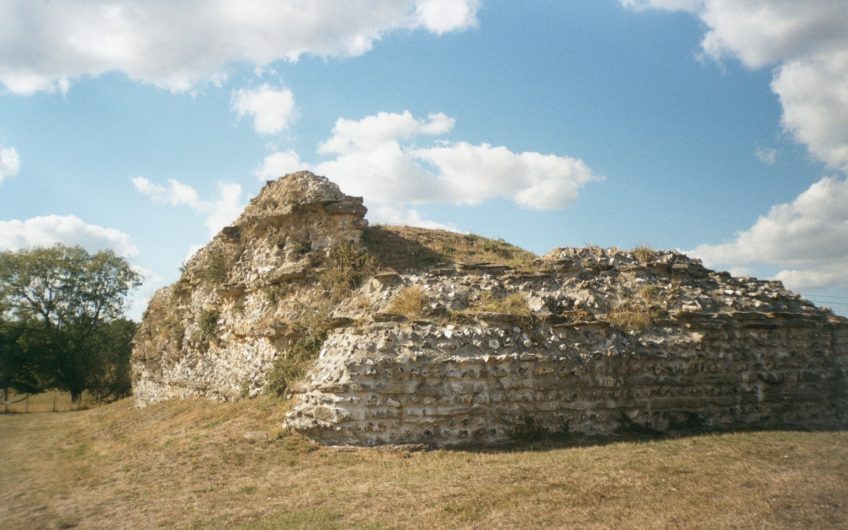 Silchester, just south of Reading, is a truly enigmatic place. A deserted Roman city, it still has a complete circuit of 3rd century stone walls, 4 metres high in places, which makes an enjoyable 1.5 mile circular walk. The only standing buildings within them are Manor Farm and the 12th century St Mary’s Church. The rest is flat grassland, beneath which the remains of the Roman town lie hidden and mostly undisturbed. The remains of the town’s amphitheatre, where spectacles of human and animal combat were enjoyed, lie close by the church.

Most Roman settlements in Britain have evolved into substantial county towns or cathedral cities but here at Calleva Atrebatum a spring walk is shared only with skylarks and boxing hares.

This special place is behind the creation of two bestselling works of fiction.

The discovery of a 2nd century cast bronze eagle was the starting point for Rosemary Sutcliff’s children’s adventure novel,The Eagle of the Ninth. The bronze eagle can be seen today in Reading Museum.

More importantly, a find from Silchester was perhaps the start of the whole genre of epic fantasy.

In 1785, an ancient gold ring was found here in a ploughed field. Its inscription reads SENICIANE VIVAS IIN DE (Senicianus live in God).

One hundred miles away on the edge of the Forest of Dean lies a Roman Temple site on Dwarf’s Hill, Lydney, dedicated to the god Nodens. In the late 1800s an inscribed lead curse was found:

‘To the god Nodens : Silvianus has lost his ring and given half its value to Nodens. Among those who are called Senicianus do not allow health until he brings it to the temple of Nodens’.

When Mortimer Wheeler was publishing his excavations at Lydney in the early 1930s, he invited J.R.R. Tolkien, Anglo-Saxon Professor at Oxford University, to contribute a note on the god Nodens. It is believed that he was much taken by the story of the Silchester ring and its curse, perhaps inspiring The Lord of the Rings.

The Ring of Silvianus now resides in a special ‘ring-room’ at The Vyne, a National Trust house a few miles to the south of Silchester.

Roman Britain and Where to Find it