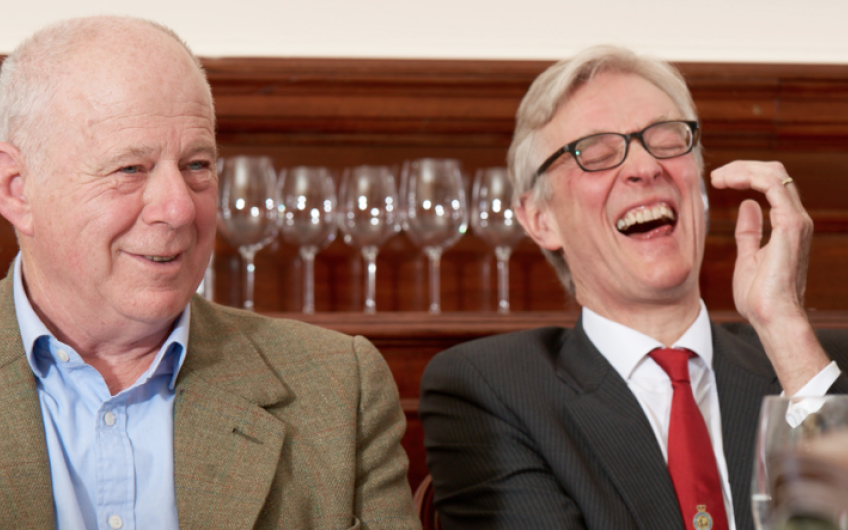 Turkey, Brussels sprouts and golden roasties were carted around the Simpson’s dining room on Tuesday ­– for the December lunch is our Christmas lunch and our long-established, end-of-year headliner. Barry Cryer and our editor, Harry Mount, continued their two-man double act – Barry ‘n’ Harry – that was born at The Oldie Staff Christmas party last week.

Harry introduced Barry: ‘We’re extremely grateful to Barry because he stepped in to save a crisis last week.’ Harry was presenting a prize to a reader in honour of the late Jeremy Lewis, the former deputy editor of The Oldie. The distinguished winner, Janet Bettesworth, was in the ladies for the prize giving – and there she remained for a good ten minutes. ‘We really needed someone to fill in,’ Harry continued, ‘step forward, Barry Cryer, who told a brilliant parrot joke – we may hear more of that. Rumours that Barry was spotted earlier on locking the winner into the ladies are untrue.’

Barry introduced the speakers with his dazzling trademark wit: ‘I’m asking our three authors to bear with me – or not, if they prefer – for we have, the parrot joke…’ – and off he went.

Two of our lunchtime speakers were united in theme, that being adventure – albeit at opposite ends of the spectrum. Something that cavalier-in-spirit food writer, Matthew Fort, was happy to admit: ‘Summer in the Islands [the title of his book] was an adventure. I mean, not in the same way that my new best friend, Nicholas Crane, does adventures. He’s a proper traveller. I’m more of a potterer – eat, drink, swim, talk; watch the world go by.’

Fort continued to conjure a vivid portrait of his experience: ‘Restaurant after restaurant, trattoria after trattoria, dish after dish, glass of wine after glass of wine. Argh, heady days they were!’ At one point, he managed to break his Achilles tendon aboard his Vespa, Nicolette. Matthew explained that: ‘Most people who know me – after I’ve told them about the incident – ask: “Was it before or after lunch?”’

Matthew, afflicted by the most appalling pain, was forced home. His brother Tom (who spoke at our October lunch at the Savoy, on The Village People) came to pick him up from the airport: ‘You know, I think this might be for the best,’ Tom explained. ‘The problem with your other books is that they’re so bloody cheerful. Now you’ve had a bit of a reverse: a bit of sadness to counteract the happiness. Maybe it would make for a better book?’ We’ll let you judge for yourselves.

Nicholas Crane began his geographical account of Britain in London’s familiar Strand – the setting of Simpson’s and The Oldie Literary Lunch. ‘It begins about 12,000 years ago ­– you can imagine it beginning here, with great herds of wild reindeer strolling up the Strand in a permafrost. Back then, the mean winter temperature was minus 17°C.’ A temperature which makes this week’s snowy-slushy jumble seem comparatively tame. Crane described glaciers in the Lake District and an ice cap 400 metres thick piled on top of Rannoch Moor, Scotland.

In the context of Britain’s 12,000-year history, Nicholas Crane managed to keep things topical: ‘In 6,500 BC, a subterraneous area of land about the size of Scotland slid off the continental shelf and fell into a void that is now the coast of Norway. It set off a tidal wave that came down the North Sea. It was probably this tidal wave that severed us off from the rest of the continent – so it was a very hard Brexit indeed.’ He added, ‘We’re not talking a couple of leisurely years; we’re talking about ten catastrophic minutes – and then we were cut off from the eurozone.’

Stephen Glover of Media Matters greatness – always the last of The Oldie contributors to file (owing to deadline rather than disinclination) – was at the lunch to talk about what he modestly described as his ‘allegedly’ comic novel, Splash!. Stephen Glover heralded the high days of journalism when the Fleet Street army wrote on a sea of alcohol.

Stephen recounted ‘the typical working day’ as described in Ferdinand Mount’s autobiography Cold Cream: My Early Life and Other Mistakes. The daily itinerary ran to something like this: at 11am, the young journalists set off to the pub. There they were given – without being asked – a pint of Guinness. Once that was gone, the political editor would order a round of chasers – ‘since Guinness can chill your stomach a bit’. After, they would return for a brief morning conference before heading to the restaurant for lunch. More journalists would join and, between them, they would demolish a couple of gin and tonics and a bottle of wine – each. Ferdy would then start on his first work of the day – a quick leader, maybe two or three hundred words. Then, off to the pub for more. And it really was like that,’ said Stephen, rather earnestly.

‘By the time I fetched up in Fleet Street,’ recalled Glover, ‘Bill Deedes, the then editor of The Daily Telegraph, had rather thoughtfully set the first leader conference at quarter to four in the afternoon – that was the first time you were to show up. Leaving a lot of time for drinking beforehand.’

Stephen’s own time in journalism – as one of the original three founders of The Independent – are all tied up in the plot of Splash!, which chronicles the experiences of his journalist protagonist, Sam Blunt. He is faced with the advent of digital journalism – ‘the online operation’ – which goes on in a downstairs, windowless dungeon of the office. Characters include a needy Oxbridge-educated work experience, Benedict Broster, various pompous columnists and a Chinese millionaire proprietor.

A fictional book with an underlying serious message. Stephen ended on a rather poignant note. ‘You probably know that all print newspapers are in slow, ineluctable decline. They sell fewer and fewer copies each year. We assume they are part of the furniture of our society – that’s not guaranteed. What’s replacing them is something that is far less substantial. The kind of journalism which Sam Blunt – for all his faults – engages with, isn’t going to thrive so well in the online world. There’s a fear that Sam may be the last of his kind.’

Matthew Fort chimed in, somewhat characteristically, ‘I find it rather tragic, the idea that ‘The Great Bibulous Days of Journalism’ are a thing of the past. I find myself incredibly lucky to have chosen a profession where, frankly, eating and drinking to excess is part and parcel of doing it in the first place.’