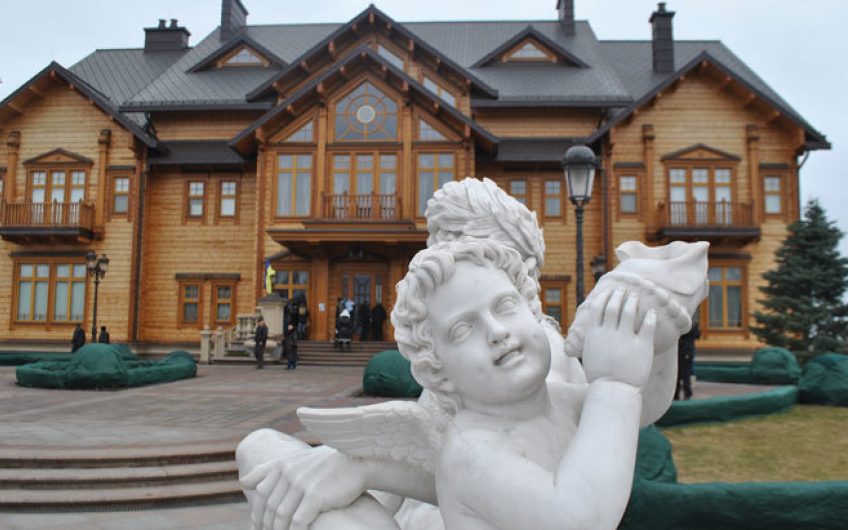 How are the mighty fallen, and what’s more, how quickly! One day Viktor Yanukovych, President of Ukraine, could stride around his huge estate admiring the wonderful views across the Dnieper, his fantastic car collection and his motley collection of emus and ostriches. Now here was I, cycling around the place, as free as a bird, while he had done a runner across the Russian border.

Sic semper tyrannis. The path from hero to zero for the Yanukovyches of this world is fairly well-trodden. One day it’s a matter of ‘let them eat cake’; the next, it’s a case of ‘by all means let them have the run of the place too!’

We hired bikes for our tour of Mezhyhirya, Yanukovych’s estate just outside Kiev – at 350 acres the place was simply too big to explore on foot. We passed through the ornate metal gates and soon reached the monstrous palace, a sort of Versailles-cum-ski-chalet set in woodlands with spectacular views. Nearby was the golf course. Then there were the presidential big birds (do not feed the emus! – the new revolutionary guard was quite adamant on that point). The Oldie was given an exclusive viewing of the Yanukovych car collection, with just one of the top-end Zils worth $1 million. ‘Corruption seems too little a word to describe this,’ said a man from one of the smaller towns outside Kiev, as his eyes blazed and jaw dropped.

‘There is simple mathematics to describe Yanukovych,’ said Daria Iurovska, news editor of Ukraine internet news service MediaPort. ‘There were nine oligarchs in 2010 when Yanukovych became president, and now there is one. And that is the Yanukovych family.’

The protests in Kiev may have been sparked in November of 2013 by Yanukovych’s decision to reject a deal with the EU, but permeating this crisis is the miasma of corruption which has consumed every level of Ukrainian society. Yanukovych’s elephantine appetite makes him a zlob, one of those lovely Russian onomatopoeic words which you’d think need little explanation. ‘In Ukraine, there is an encyclopaedia of greed,’ joked Dimitro Kutovyi, a businessman based in the eastern city of Kharkiv. ‘In this encyclopaedia, a zlob is a type of person who builds his own world around him, and that usually takes a lot of other people’s money.’

Ukrainian businessmen such as Kutovyi say that they have to spend hours of each working day dealing with corrupt public officials. Corruption is rife at local, regional and central government levels. It includes everyone from traffic cops to university professors. Ukraine has evolved into a kleptocracy.

Both UK and US governments pledged to help Ukraine recover the $70 billion which some estimate has gone to the Yanukovych family and close circle. The UK sent a team of financial experts headed by the National Crime Agency to help Ukraine recover stolen monies. It has also been reported that assets belonging to 32 former government officials in Ukraine, including Yanukovych, have already been frozen in the EU, as well as Latvia, Canada and Switzerland. But embarrassingly for the UK, the corrupt Ukrainian elite has been taking advantage of British company laws and, in particular, company structures such as the Limited Liability Partnership (LLP).

Richard Brooks, former tax inspector turned award-winning investigative journalist, described LLPs as ‘almost the perfect vehicle for hiding corruption, because they are British, they look respectable. But at the same time, you don’t have to say who the ultimate owners of them are; you don’t have to have a natural person as a director. You don’t have to have anybody’s name on it. All you have to do is set up a British LLP, backed by a couple of offshore shell companies. That’s the perfect vehicle for moving money around without anyone knowing who’s behind it.’

Brooks has identified the existence of about 2,000 LLPs, many moving huge fortunes around the world and some involved in corrupt deals. ‘One of the features of these corrupt LLPs is that they simply file false accounts at Companies House so they don’t show what they are actually doing,’ he said.

The so-called British connection has also been identified by anti-corruption campaigners in Kiev, one of whom, Daria Kaleniuk, told me: ‘The theft is on an enormous scale. For every dollar of revenue, eighty per cent is embezzled. British companies are often used in corruption, particularly those based off-shore. I’m not talking just about Yanukovych but the whole of the Ukrainian elite. When you look at those companies which win public contracts with unfair practices and procedures, you find that about a third of them are linked to the offshore world, and in particular British companies based in British Overseas Territories, like the British Virgin Islands and Caymans.

‘The only answer is a wholesale clear-out of public officials starting with the judiciary and criminal justice system – but I have no confidence in our new interim government doing that.’